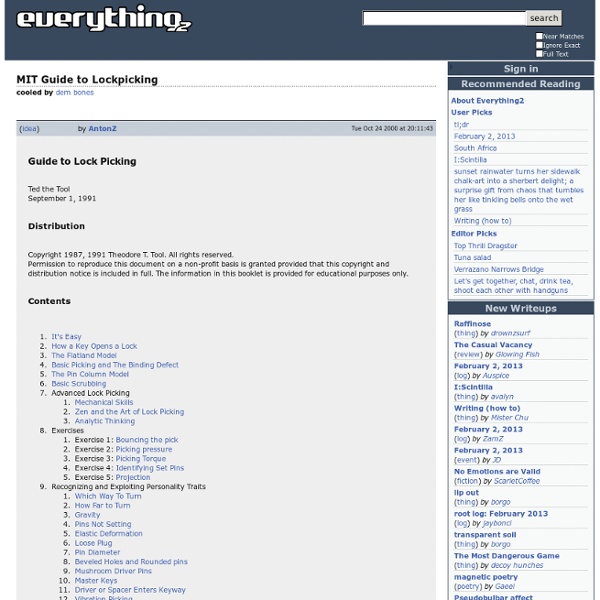 While the "MIT guide to lockpicking" is reproducible on a "non-profit basis", some concern has been expressed on behalf of the MIT 'hacking community'. See: Comment or guidance from any current members of the MIT community would be welcome. Please read the text at one of the above links for full details. I reproduce the Executive Summary and a bit of other context below: The MIT Hacking community is saddened by the series of recent events which have made the "MIT Guide To Lockpicking" available electronically in a indiscriminate fashion.

Internet Anagram Server / I, Rearrangement Servant : anagram, anagrams, nag a ram, software, anagramme, anagrama, wordplay, word play, anagram creator, anagram solver, anagram finder, anagram generator, anagram maker, anagram unscrambler, anagram machine, In News:The New York TimesSydney Morning HeraldThe Globe and MailJerusalem Post Did you know that parliament is an anagram of partial men? Or, Clint Eastwood an anagram of Old West Action? Someone once said, "All the life's wisdom can be found in anagrams. données ouvertes et liées (hacking) Yesterday we summarized some of the main developments in the Linked Data world over the past year. Linked Data is a W3C-backed movement that is all about connecting data sets across the Web. It can be viewed as a subset of the wider Semantic Web movement, which is about adding meaning to the Web. However, there is some confusion in the Semantic Web community about the crossover. To add to the confusion, there is a term called 'Open Data' that is being bandied around too.

The Open Organisation Of Lockpickers This is a repository of the most up-to-date versions of Deviant's lock diagrams and animations. Seen in all of the TOOOL educational materials and slide decks, these files are all released under the Creative Commons license. You are free to use any of them for non-commercial purposes, as long as they are properly attributed and the same freedom for others is maintained in all derivative works.

Teach yourself to program We are entering the summer, the perfect time to improve yourself, you could go running or swimming, you could learn a new foreign language or perhaps you could learn to program. Self-learning is not as hard as it sounds, and it’s much easier than self-learning Spanish or French. There are really wonderful sources to start learning these new languages, understanding the concept behind programming and giving it a try with some interesting problems. Basic Programming Via XKCD Survival Food Series: 25 Survival Seeds You Need For Your Garden Living off the land sounds as inviting as Christmas dinner. But many have hardly had adequate experience being “farmers.” In fact, many have had no experience at all when it comes to planting anything. That being said, the day is slowly approaching where each of us may have to trade in our company identification badges for a shovel and a pair of overalls.

The Lockdown: Locked, but not secure (Part I) Noted security expert Marc Weber Tobias contributes a new column, The Lockdown, exposing the shoddy security you may depend on. The Bump Key: A new old threat to the security of mechanical locks The most popular locking mechanism in the world utilizes the pin tumbler design, first developed 4000 years ago in Egypt and then rediscovered and perfected a century and a half ago by Linus Yale. There are billions of these locks in the world and they come in all sizes, configurations, and security ratings. Some are secure; most are not, and even some high security rated cylinders can be easily compromised. All that is required to open many times of pin tumbler cylinders -- the kind of lock that probably keeps the bad guys out of your home -- is a bump key and a tool for creating a bit of force.

How To Validate A Credit Card With Your Mind How To Validate A Credit Card With Your Mind [source] Accept Credit Cards Using your Smartphone with no monthly fees - Try Kudos Today! Bottle Reworking Link to Bottle Labels I consider bottle slumping to be one of the really boring activities in the world, but I will share some information about it since everyone who gets anywhere near a kiln seems to be interested in it for a while. The problem from my point of view is that unless one gets really creative, there are only a limited number of things one can do: stretch the bottle, flatten the bottle, make a spoon holder, make an ashtray. [Some people have made societal comment by arranging slumped bottle shapes in ways that suggest comment on mechanical and tired society - "Preacher and Choir", "Exhaustion", but that is more art than slumping, I think, and not me. 2002-07.] To change the form of a bottle all you need is an oven that can reach about 1400°F, which all pottery kilns and most glass annealers can do easily. For the result to survive cooling, either the kiln must lose heat especially slowly or there must be a controller that will take the temperature down slowly.

piratesanta running Right after Talk Like A Pirate Day Sept 19th get ready for the coming of Pirate Santa! Pirate Santa is a children's book about tattooed pirates in the Caribbean that save the day.Join Cap'n Slappy, Tal ,Ninja Boy, Pirate Baby Girl and crew in one of the best Kid's books about a Christmas pirate adventure. Brought to you by Santa Claus and Studio City Tattoo Santa Claus – The Most Exciting Part of Christmas Christmas is round the corner and people all over the world are getting ready to celebrate one of the most popular and loved festivals of all.