Change The World By Doing Work You Love 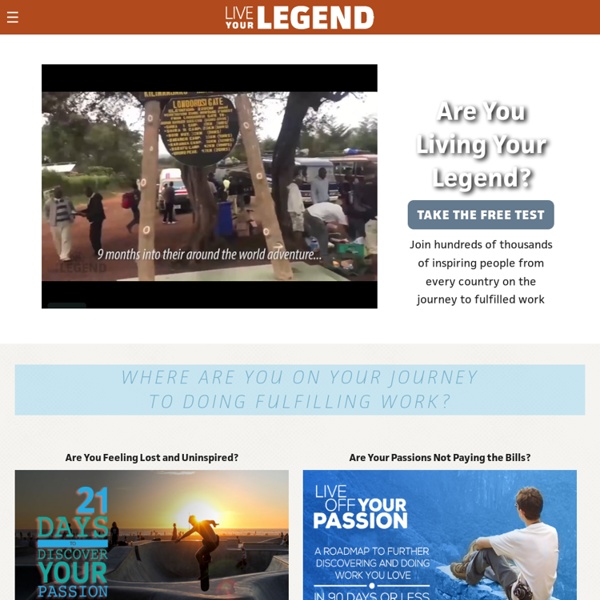 “Rome wasn’t built in a day…that’s true. But, it also took a lot more than just one person to build it!”- Chris Ducker, author of Virtual Freedom You Ever Had Superhero Syndrome? Years ago, I used to think I wanted to build a business that had exactly one employee – me. I loved the idea of how simple that sounded and the freedom it would allow.

Blog This Is The #1 Mistake Parents Make When Arguing With Kids Eric Barker - October 18, 2015 World of CEOs Jobs, Opportunities and Talent Getting the top job How to give yourself the best possible shot As a former CEO headhunter and CEO confidant, Steve Tappin, our founder, is accustomed to helping CEOs get the top job. Here are his top tips:

10 Free Apps for LinkedIn You Need To Know If you are reading this, chances are you have a profile on LinkedIn, the popular networking site for professionals. It doesn’t matter if you like or hate the network (plenty of supporters on either side of the fence) anyone who wants to tap into its network of more than 300 million members will want in on that piece of pie. To help you with that, we have here a list of apps – found within and outside LinkedIn – that can help you do more with your LinkedIn profile, and help you improve your value as a professional worker, in general.

Consciousness Began When the Gods Stopped Speaking: Julian Jaynes’ Famous 1970s Theory Julian Jaynes was living out of a couple of suitcases in a Princeton dorm in the early 1970s. He must have been an odd sight there among the undergraduates, some of whom knew him as a lecturer who taught psychology, holding forth in a deep baritone voice. He was in his early 50s, a fairly heavy drinker, untenured, and apparently uninterested in tenure. His position was marginal. 25 Top UK Startups The London startup scene is well-documented. But the UK innovation ecosystem is not confined to the city. All types of companies are emerging from surrounding places, in Cambridge, Edinburgh, Brighton, Manchester, Birmingham, small Welsh villages, an island in the English Channel. Here is a list of the top 25, although we could've easily named 125. Nominate some of your own picks in the comments below. 1.

The Sphere of All Possibilities A Hathor Planetary Message through Tom Kenyon In this message we will endeavor to share with you a method for manifesting outcomes in your 3-D reality as well as in other dimensions of your being. This method is based on a fundamental understanding regarding geometry and the nature of consciousness. There are many geometries available to be used as vehicles for manifestation. We wish to share one of the simplest and, ironically, most effective. The first thing to understand about manifesting is that for every act there is a counter-action. The Top 100 Documentaries We Can Use To Change The World By Films For Action / filmsforaction.org Documentaries have an incredible power to raise awareness and create transformative changes in consciousness both at the personal and global levels. Over the last 8 years, we've watched hundreds of social change documentaries and cataloged the best of them on the site. There's now so many that we realized we needed to filter this down even further.

How to Stop Complaining Perhaps the most important step in quitting the habit of complaining is to disconnect the undesirable behavior from your identity. A common mistake chronic complainers make is to self-identify with the negative thoughts running through their minds. Such a person might admit, “I know I’m responsible for my thoughts, but I don’t know how to stop myself from thinking negatively so often.” That seems like a step in the right direction, and to a certain degree it is, but it’s also a trap. It’s good to take responsibility for your thoughts, but you don’t want to identify with those thoughts to the point you end up blaming yourself and feeling even worse. A better statement might be, “I recognize these negative thoughts going through my mind. Study Hacks - Decoding Patterns of Success - Cal Newport The Opposite of the Open Office October 19th, 2016 · 12 comments The Bionic Office A couple weeks ago, I wrote about Joel Spolsky’s claim that Facebook’s massive open office is scaring away talent. The comments on the post added many interesting follow ups; e.g., a pointer to a recent podcast episode where a Facebook developer claims the office is rarely more than a third full as people have learned to stay home if they want to produce anything deep. A critique of open offices, however, inspires a natural follow-up question: what works better?

17 Creative Facebook Timeline Profile Designs Home » Design » 17 Creative Facebook Timeline Profile Designs On F8 Developers Conference Facebook launched new ‘Timeline’ profile design. Timeline is a totally revamped version of the old Facebook profile concept. mentalfloss 8931 803Share23.3K Nothing lasts forever, so you might want to get out there and explore while you still can. Consider using this infographic, which gives 10 examples of places with approaching expiration dates, as a guide—but remember to be a respectful traveler. Click to enlarge via DailyInfographic.com and PinayTraveller.com Shake Shack: Branding a Better Burger Paula Scher's distinctive Shake Shack identity has helped launch the fast-casual hamburger chain as a $1.6 billion brand. As every Shackburger fan knows, Shake Shack serves some of the best burgers in the world. And now, with a recent IPO that has valued the company at a staggering $1.6 billion, more of the world will get to know the Shack: From its roots as a hot dog stand in New York’s Madison Square Park, the company has grown into a chain of 63 restaurants from Chicago to Dubai, and plans to use the additional funds to expand to over 400 locations in the next decade. Tastiness of its burgers aside, no small part of Shake Shack’s success is due to its sophisticated sense of design, expressed in an iconic brand identity and environmental graphics by Pentagram’s Paula Scher and original restaurant architecture by James Wines and his firm SITE.

On Being Very Normal Views: 6405 It really matters what we think of as ‘being normal,’ because we are collective creatures. We’re acutely receptive to group dynamics and sensitive to where we fit in – or the ways in which we don’t.