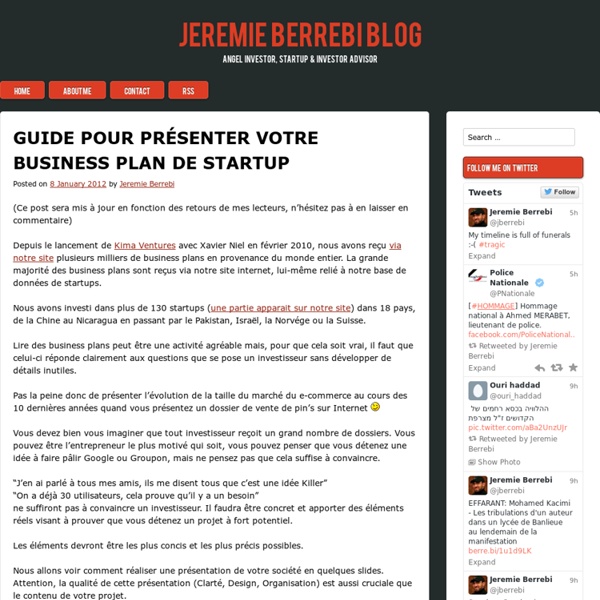 Should Startups Focus on Profitability or Not? There are certain topics that even some of the best journalists can’t fully grok. One of them is profitability. I find it amusing when a journalist writes an article about a prominent startup (either privately held or preparing for an IPO) and decries that, “They’re not even profitable!” I mention journalists here because they perpetuate the myth that focusing on profits is ALWAYS the right answer and then I hear many entrepreneurs (and certainly many “normals”) repeating the same mantra. There is a healthy tension between profits & growth.

Behind the Scenes: How Fab Raised $40 million with a lot of data and not much pain Let’s face it, fundraising can be a real pain in the ass for the entrepreneur. It takes up a ton of time that can be otherwise spent managing the business. Sure, it’s a necessary evil, but it’s also typically a big distraction. How To Get A Job At A Startup If You Have No Skills Editor’s note: This guest post is by Justin Kan, cofounder of Justin.tv and TwitchTV. You can follow him on Twitter and read his blog. Recently I had a conversation with a friend of mine who was interested in doing product management at a startup. He was working as a consultant, but wanted to join a company like foursquare as a PM.

Burn Rates: How Much? In the comments to last week's Burn Rate post, I was asked to share some burn rates from our portfolio. I can't do that. But an alternative suggestion was to write a post suggesting some reasonable burn rates at different stages. I can do that and so that's the topic of today's post.

Don't give bullshit advice I chatted with a young guy last night about his new startup idea. He's got a vision for a social commerce app with a few cool spins on it. As I listened to him, I was thinking about how I had heard this exact pitch half a dozen times before. I also knew I had a lot to offer him in terms of help. Raising Money On AngelList: 21 Tips From Two Active Angels The following is the result of a collaboration between Ty Danco and Dharmesh Shah. Ty is an angel investor and startup mentor (you should be reading his blog). Dharmesh is founder and CTO of HubSpot, runs OnStartups.com and is an advisor to AngelList. [Note: All the smart useful stuff in the article is Ty, all the feeble attempts at humor are Dharmesh] AngelList (AL) connects promising startups to a sterling network of early stage investors.

Startup Tools Startup Tools 1. Startup Tools Click Here Want to Know How VC’s Calculate Valuation Differently from Founders? Back in 1999 when I first raised venture capital I had zero knowledge of what a fair term sheet looked like or how to value my company. Due to competitive markets we ended up with a pretty good term sheet until we needed to raise money in April 2001 and then we got completely screwed. It was accept the terms or go into bankruptcy so we took the money. Those were the dog days of entrepreneurship. But the truth is that I didn’t really understand just how screwed I was until years later when I finally understood every term in a term sheet and more importantly I understood how each term could actually be used to screw me.

Looking To Hire Top Talent For Your Startup? Here Are Five Things You Should Know. You may know Dan Porter as the CEO of the free multiplayer gaming and chat platform, OMGPOP, which specializes in making social games, like Puppy World, for example. What you may not know is that, for the last year, Porter has been managing and curating a free, weekly newsletter called Inside Startups. The mission of Inside Startups, Porter says, was to move people from larger companies and corporations into up-and-coming startups in an effort to galvanize the New York City startup scene. The conceit, too, is simple. If you’re looking for a job at a startup or know someone who does, simply sign up (for free) and Inside Startups will email you five great startup jobs available in New York City every Saturday.

How We Raised $1.3 Million As First-Time Founders When Jim and I quit our finance jobs to start the next big thing, we were really unprepared for our startup journey. We didn’t have startup experience, we had no real domain expertise (our startup wasn’t going to be about finance), and we didn’t know any investors in the tech community. There was very little reason for them to want to invest in our startup. Does Your Startup Have a Good Story? Never underestimate the importance of having a good story when pitching your startup to potential investors, clients, partners, and journalists. As Seth Godin writes in his 2005 bestseller All Marketers Are Liars, "Either you're going to tell stories that spread or you're going to become irrelevant." Godin's book addresses a shift in marketing - away from simply presenting factual information and towards telling great stories. As Godin suggests, these stories make us want to believe - in a product, in an idea, in a company. As you craft a story for your startup - whether it's to be used in marketing, in a pitch to investors, or in conversation with friends and family - here are some things to keep in mind. Your story should be short.

The big businesses learning how to think small 14 October 2011Last updated at 00:08 By Dave Lee Technology Reporter, BBC News In times gone by, marketing was all about massive names and expensive campaigns "We're the biggest start-up on the planet." Of the many quotes recited in the days following the untimely death of Steve Jobs, it is perhaps that one, told to a conference in 2008, that resonates most with the many businesses admirable of Apple's success. His insistence on "no committees" and talking to everyone at least once a week was, he said, enough to keep Apple focused, efficient and successful. For big corporations, with their vast resources and bewildering bureaucracy, operating with the attitude of a technology start-up is at once terrifying and yet also a distant dream.