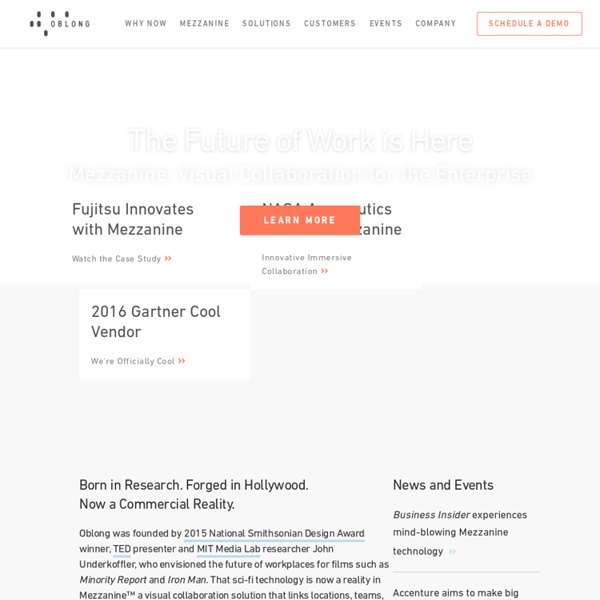 REA(I+I+I)@GSD Sumona Chakravarty schakrav@gsd.harvard.edu Hailong Wu hwu1@gsd.harvard.edu WeScreen! Pie menu A pie menu. Pie menus work well with keyboard acceleration, particularly four and eight item menus, on the cursor keys and the number pad. A goal of pie menus is to provide a smooth, reliable gestural style of interaction for novices and experts.[1] As a kind of context menu, pie menus are often context-sensitive,[4] showing different options depending on what the pointer was pointing at when the menu was requested. Creative Projection Ghost Box The Ghostbox is a prototype conceived by the creative studio Leviathan who sought a way to forge a connection between people and clients' products.more Projection Mapping in Merchandising Display Applications What's one way to show your wares without taking up space to store them? Employ the services of a good 3D projection mapper. I can't stop thinking about all the possibilities for projectors and creative projection mapping in the retail arena.

61 Best Social Media Tools for Small Business 4.5K Flares Filament.io 4.5K Flares × Banana Republic and Susan’s Neighborhood Shirt Shop could be using the same social networks—Twitter, Facebook, Google+, etc.—but their marketing plans and their marketing tools are likely quite different. #AirQualityEgg by #Sensemakers Update 4/12: You can now upgrade the Air Quality Egg (including the DIY versions) with sensors for O3 ($25), VOC's ($25), radiation ($60), and particulates ($40)! Add the cost directly to your pledge (we will confirm your order after the campaign ends). See HERE for more info! Where's the data? Look outside your window -- have you ever wondered what the quality of the air is out there? I mean RIGHT.

easyGestures - Screenshots Main Features Figure 1. pop up inside the browser with tooltips. Figure 2. extending the pie menu: 6 views. wet electron The Secret Book of SecretsA short film created in my Green Screen Movie Class at Beam CenterThe kids wrote the story, created all the props, and acted in the filmNarrated by Harry MerrittThanks to Enki for the lights This was my second ‘make a movie’ class and was very different from the first. Mainly, the group was all boys, so naturally when given (almost) free reign to create a film, it was going to be an action movie. A lot of the ideas I liked in my previous class like having the students draw scenes and then be green screened into them, or creating the sound track with some Casio’s and effects pedals were nixed in favor of more explosions, and theme songs. While it took two months to edit, think it came out alright.

Telepresence Telepresence Session with Ghana, Africa and Newark, NJ A telepresence system in 2007 Telepresence refers to a set of technologies which allow a person to feel as if they were present, to give the appearance of being present, or to have an effect, via telerobotics, at a place other than their true location. A popular application is found in telepresence videoconferencing, the highest possible level of videotelephony.

EHCI › demos › Leaf Menus This paper presents Leaf menu, a new type of contextual linear menu that supports curved gesture shortcuts. By providing an alternative to keyboard shortcuts, the Leaf menus can be used for the selection of commands on tabletops, but its key benefit is its adequacy to small handheld touchscreen devices (PDA, Smartphone). Indeed Leaf menus define a compact and known layout inherited from linear menus, they support precise finger interaction, they manage occlusion and they can be used in close proximity to the screen borders. Moreover, by providing stroke shortcuts, they favour the selection of frequent commands in expert mode and make eye-free selection possible. Contact Kinect-powered Email 4 the disabled Make Projects Tech September 6, 2012 at 4:14 pm My mom has lived with aphasia ever since she suffered a serious stroke twelve years ago. In the meantime, there’s been a revolution in communication – powered by social media.