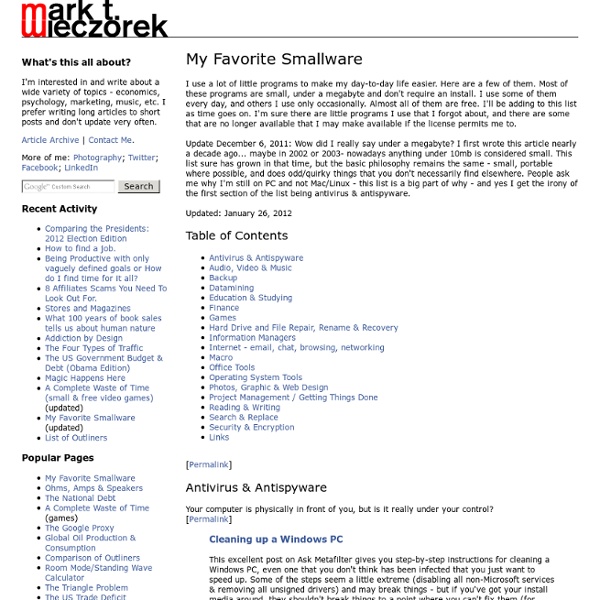 Large collection of Free Microsoft eBooks for you, including: SharePoint, Visual Studio, Windows Phone, Windows 8, Office 365, Office 2010, SQL Server 2012, Azure, and more. - Microsoft SMS&P Partner Community Blog - By Eric Ligman Throughout the year I try to share resources and information with you that I think will be helpful for you. Often times these resources will include links to free eBooks that we make available on a variety of topics. Today, I thought I would post a large collection of eBooks for you here so that you can find them in one place and consume them as you see fit. Also, if you find this list helpful, please share it with your peers and colleagues so that they too can benefit from these resources.

50 Kick-Ass Websites You Need to Know About It's time to update the entries in your browser's links toolbar. But with recent estimates putting the size of the internet at well more than 100 million distinct websites, it's getting harder and harder to get a handle on all the great stuff that's out there. That's why we've compiled this list. And unlike some lists you may have seen, which try to name the very "best" websites, but end up just telling you a lot of stuff you already know, we've chosen instead to highlight 50 of our favorite sites that fly under most people's radar. Think of it as the Maximum PC blog roll (remember those?). These sites represent great alternatives to popular web destinations like YouTube and Hulu, and include useful references, powerful web apps, and the unknown blogs you must absolutely bookmark.

KatMouse - mouse wheel utility for Windows Mouse wheel enhancement for Windows (screen shot) written by Eduard Hiti. Purpose The prime purpose of the KatMouse utility is to enhance the functionality of mice with a scroll wheel, offering "universal" scrolling: moving the mouse wheel will scroll the window directly beneath the mouse cursor (not the one with the keyboard focus, which is default on Windows). This is a major increase in the usefullness of the mouse wheel.

How to Make Limited-Time App Deals Last Forever At least in the case of the Starbucks free apps, the developers get paid. (At least that's how I understand it. I know, it gets in the way of consumer-bashing, but you can have your fill of that on the Consumerist.) You know the developers still get paid in these sales, right? Whether or not they get 'stimulated' is up to them. I'm confused by your argument.

10 Greatest Open Source Software Of 2009 These are full-featured cross-platform softwares, free as in beer and speech. Vivek Gite picks his best open source software of 2009. #1: Inkscape ( Vector Graphics Editor ) Fig.01: Inkscape is used by artist/illustrator/designer as vector graphics editor Open Source Alternative to Commercial Software Graphic Applications ACDSee Imgv is a unique and feature rich Image Viewer. It is released as free software with full source code. Imgv is portable and can run on Windows, Linux, BSD, OSX, and other operating systems.