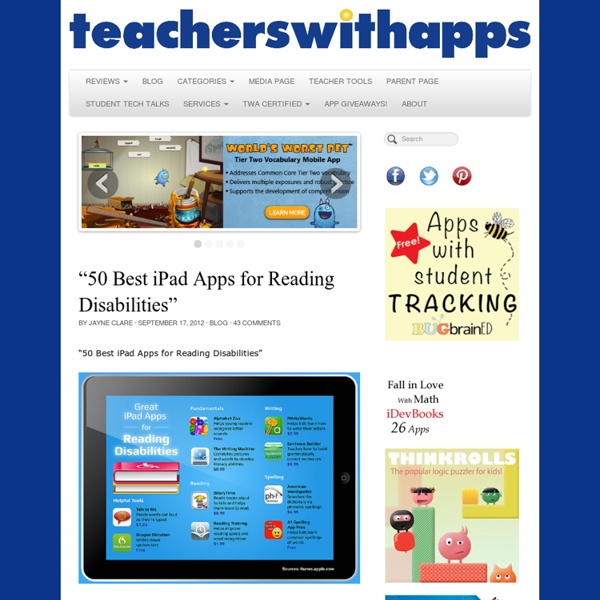 “50 Best iPad Apps for Reading Disabilities” Guest Blog by Rosa Ray Whether you’re the parent of a child with a reading disability or an educator that works with learning disabled students on a daily basis, you’re undoubtedly always looking for new tools to help these bright young kids meet their potential and work through their disability. While there are numerous technologies out there that can help, perhaps one of the richest is the iPad, which offers dozens of applications designed to meet the needs of learning disabled kids and beginning readers alike. Here, we highlight just a few of the amazing apps out there that can help students with a reading disability improve their skills not only in reading, writing, and spelling, but also get a boost in confidence and learn to see school as a fun, engaging activity, not a struggle. Here are “50 Best iPad Apps for Reading Disabilities:” Helpful Tools Speak It! Fundamentals Reading Writing Spelling

Apps for Dyslexia and Learning Disabilities Write in Style is every writer’s best friend. Smart text prediction helps you write in selectable styles, fast and without typos. Writers and bloggers can write in the style of their favorite authors. How would Jane Austen finish this sentence? There is More to iPads in the Classroom Than Apps  In a previous post, Evaluating Apps with Transformative Use of the iPad in Mind, I describe my ambivalence about teacher asking my for the “perfect” app to teach this or that. I have teachers ask me frequently about app recommendations for different subject areas.“What app could I use to teach subtraction?”“What app would you recommend for my students to practice writing?”“I want to use iPads in my Science class.

Equal Access: Universal Design of Libraries A checklist for making libraries welcoming, accessible, and usable Libraries play an important role in ensuring that everyone has access to information in printed and electronic forms. In making these resources accessible and useful to everyone, principles of universal design (UD) can be employed. Legal Issues Section 504 of the Rehabilitation Act of 1973 and the Americans with Disabilities Act of 1990, and the Americans with Disabilities Act Amendments of 2008 prohibit discrimination against individuals with disabilities. According to these laws, no otherwise qualified person with a disability shall, solely by reason of his or her disability, be excluded from the participation in, be denied the benefits of, or be subjected to discrimination under any program or activity of a public entity.

Batch-Create QR Codes in Google Spreadsheet Overview:Enter some text or a URL in a spreadsheet and a QR code will be automatically created – all with the help of a little formula that you’ll learn about in this tip of the week. This is a great way to create lots of QR codes very quickly and easily! You will have two options: 1. Sibling's Voice - VOR It was a matinee showing of the Broadway play “The King and I” and the excited audience members took their seats. One mother that was attending, however, decided to bring her autistic son with her and hoped that he wouldn’t be a distraction to the other members of the audience. When the play started, however, things. didn’t go as expected. The mother’s son started making a fuss and members of the audience became frustrated. How the crowd reacted, however, shocked Kelvin Loh, one of the actors in the Broadway play. After the play was over, Kelvin went on Facebook in order to collect his thoughts.

Learning to Go: Lesson Ideas for Teaching with Mobile Devices, Cell Phones, and BYOT Every day, people around the world communicate, connect, and learn digitally on the go. Our students spend hours with their devices and digital tools. Imagine if some of that time was spent learning your content. Imagine your students learning by creating, playing, translating, editing, curating, researching, and brainstorming digitally on cell phones, mobile devices, laptops, tablets, iPads, Chromebooks, and consoles. Learning to Go is a collection of lesson plans, resources, handouts, and tips for teachers wishing to incorporate mobile devices, cell phones or BYOT (Bring Your Own Technology) into their teaching. This book offers suggestions for adapting your curriculum even if your students have little access to technology or you are new to technology integration.

UDL in the ESSA Date: Wednesday, February 17, 2016 This past December, Congress passed the Every Student Succeeds Act (ESSA), which replaces No Child Left Behind. And for the first time, the nation’s general K-12 education law defines and endorses Universal Design for Learning. As CAST’s friends at the National Down Syndrome Society (NDSS) point out— UDL is referenced numerous times throughout the ESSA bill, and states are encouraged to design assessments using UDL principles, to award grants to local education agencies who use UDL, and to adopt technology that aligns with UDL. NDSS and the 45+ fellow members of the National UDL Task Force, which was formed in 2006, have played a critical role in raising awareness on Capitol Hill of UDL’s potential to support better teaching and learning with high expectations for all students, including those with disabilities.

Back-to-School Guide for Dyslexic Students: Apps and More With the school year fast approaching (or already in full swing) here are my favorite apps and products for accessibility. Hopefully these apps and products will help make the school year successful for those needing assistive technology to support their reading and writing. This list is geared toward students with dyslexia but many of the apps and products can also benefit other students. To learn more about any of these products or apps click on the accompanying link.