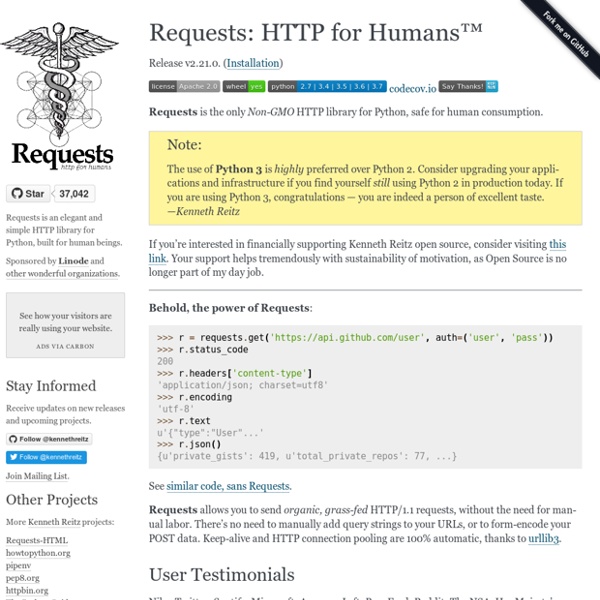 The Python Tutorial — Python 2.7.13 documentation Python is an easy to learn, powerful programming language. It has efficient high-level data structures and a simple but effective approach to object-oriented programming. Python’s elegant syntax and dynamic typing, together with its interpreted nature, make it an ideal language for scripting and rapid application development in many areas on most platforms. The Python interpreter and the extensive standard library are freely available in source or binary form for all major platforms from the Python Web site, and may be freely distributed.

Top 15 Python Libraries for Data Science in 2017 – ActiveWizards: machine learning company – Medium As Python has gained a lot of traction in the recent years in Data Science industry, I wanted to outline some of its most useful libraries for data scientists and engineers, based on recent experience. And, since all of the libraries are open sourced, we have added commits, contributors count and other metrics from Github, which could be served as a proxy metrics for library popularity. Core Libraries. 1.

Bottle Bottle is a fast, simple and lightweight WSGI micro web-framework for Python. It is distributed as a single file module and has no dependencies other than the Python Standard Library. Routing: Requests to function-call mapping with support for clean and dynamic URLs.Templates: Fast and pythonic built-in template engine and support for mako, jinja2 and cheetah templates.Utilities: Convenient access to form data, file uploads, cookies, headers and other HTTP-related metadata.Server: Built-in HTTP development server and support for paste, fapws3, bjoern, gae, cherrypy or any other WSGI capable HTTP server. Example: “Hello World” in a bottle Introducing Pandas Objects Welcome back. Please sign in. Welcome back. {* #userInformationForm *} {* traditionalSignIn_emailAddress *} {* traditionalSignIn_password *} {* traditionalSignIn_signInButton *}

Stallion I’m happy to announce the first release v.0.1 of the Stallion project. Stallion is a visual Python package manager compatible with Python 2.6 and 2.7 (I still haven’t tested it with Python 2.5). The motivation behind Stallion is to provide an user friendly visualization with some management features (most of them are still under development) for Python packages installed on your local Python distribution. Stallion is intended to be used specially for Python newcomers. The project is currently hosted at Github, so feel free to fork, contribute, make suggestion, report bugs, etc. All you need to do to install Stallion is to use your favorite Python distribution system, examples: The Python Tutorial — Python 3.6.2 documentation Python is an easy to learn, powerful programming language. It has efficient high-level data structures and a simple but effective approach to object-oriented programming. Python’s elegant syntax and dynamic typing, together with its interpreted nature, make it an ideal language for scripting and rapid application development in many areas on most platforms. The Python interpreter and the extensive standard library are freely available in source or binary form for all major platforms from the Python Web site, and may be freely distributed.

Presentations & Blog Posts — Conda documentation Package, dependency and environment management for any language: Python, R, Ruby, Lua, Scala, Java, Javascript, C/ C++, FORTRAN Conda is an open source package management system and environment management system for installing multiple versions of software packages and their dependencies and switching easily between them. It works on Linux, OS X and Windows, and was created for Python programs but can package and distribute any software. Conda is included in Anaconda and Miniconda. Conda is also included in the Continuum subscriptions of Anaconda, which provide on-site enterprise package and environment management for Python, R, Node.js, Java, and other application stacks. Conda is also available on pypi, although that approach may not be as up-to-date.

Moving from R to Python: The Libraries You Need to Know Why the switch? One of my favorite parts of machine learning in Python is that it got the benefit of observing the R community and then emulating the best parts of it. I'm a big believer that a language is only as helpful as its libraries. So in this post I'm going to go over some critical packages that I use almost every time I work in R, and their counterpart(s) in Python. 10 interesting Python modules to learn in 2016 In this article I will give you an introduction into some Python modules I think of as useful. Naturally this can vary in your case but anyway it is a good idea to look at them, maybe you will use them in the future. I won't give a thorough introduction for each module because it would blow-up the boundaries of this article. However I will try to give you a fair summary on the module: what id does and how you can use it in the future if you are interested.

An A-Z of useful Python tricks – freeCodeCamp.org Python is one of the world’s most popular, in-demand programming languages. This is for many reasons: it’s easy to learnit’s super versatileit has a huge range of modules and libraries I use Python daily as an integral part of my job as a data scientist. Along the way, I’ve picked up a few useful tricks and tips.

Simple Method of Creating Animated Graphs Introduction After the publication of one of my latest articles, many people asked me for tips on how to create animated charts in Python. Indeed, there are often situations when a static chart is no longer sufficient and in order to illustrate the problem we are working on we need something more powerful. There are of course many libraries that allow us to make animated and sometimes even interactive graphs like Bokeh, Pygal or my personal favorite Plotly. Lesser Known Python Libraries for Data Science – Analytics Vidhya Colorama colorizes the Terminal Output in Python. It uses the standard ANSI escape codes to colorize and style terminal output. Sometimes it is a good idea to color the logs in the terminal so that if anything goes wrong is stands out. Even though one can manually colorizing output by using escape characters, but that is a very lengthy and tedious task. Colorama offers a simple solution.