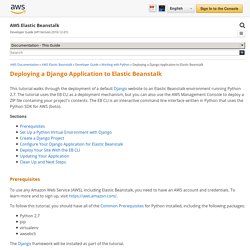 The tutorial uses the EB CLI as a deployment mechanism, but you can also use the AWS Management Console to deploy a ZIP file containing your project's contents. The EB CLI is an interactive command line interface written in Python that uses the Python SDK for AWS (boto). Prerequisites. Django and AJAX Form Submissions - say 'goodbye' to the page refresh. This is a collaboration piece between Real Python and the mighty Nathan Nichols, using a collaborative method we have dubbed ‘agile blogging`. 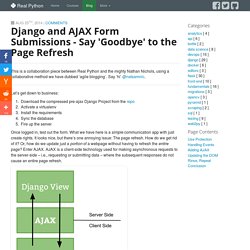 Say ‘hi’ @natsamnic. Let’s get down to business: Download the compressed pre-ajax Django Project from the repoActivate a virtualenvInstall the requirementsSync the databaseFire up the server Once logged in, test out the form. How to Deploy a Simple Django App Using AWS. So you've written your first Django app and now you want to show the world your awesome To Do List. 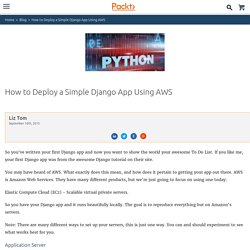 If you like me, your first Django app was from the awesome Django tutorial on their site. You may have heard of AWS. What exactly does this mean, and how does it pertain to getting your app out there. AWS is Amazon Web Services. Django Screencasts and Tutorials - GoDjango.com. 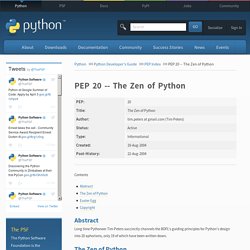 Beautiful is better than ugly. Simple Django application. In this section: Before you start Make sure that the following prerequisites are met: You are working with PyCharm version 2016.1 or higher. 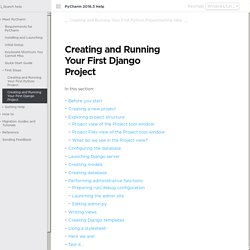 If you still do not have PyCharm, download it from this page. To install PyCharm, follow the instructions, depending on your platform.You have at least one Python interpreter properly installed on your computer. Quickly and Easily Way to Create a Django Application: BeDjango Starter. In the following post we will talk about the starter we have released from BeDjango. 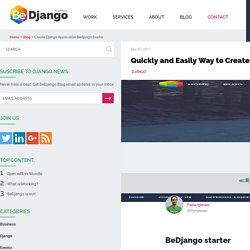 The decisions we have made, the features we have decided to add and some aspects that we would like to emphasize: Why did we decide to make a starter? Although starting a project in Django is a fairly quick and easy process, after developing several applications, we realized that we used to invest a certain amount of time in each project to implement similar features (registry, basic views, validations, configuration of libraries ...) Therebefore, we decided to invest that time in making a starter that we could easily reuse ...

But the thing went out of hand and we created a fairly complete Django base application. Architecture We decided to modify the initial structure of folders and files that gives us django, many of these files are already being used by the community: Main Features Packages included. Why you should use Django for your next website project? When embarking upon the development of a new web application, one of the most important questions we must ask ourselves is what programming language we should use: PHP, Ruby, Python....Should I opt for a framework or develop from scratch? 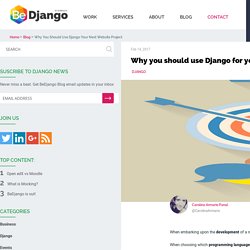 Do you want to know the key points which can help you to decide? Well, read on! When choosing which programming language to use, different factors must be taken into account such as: the number of available developers, experience in the technology, or its cost. GitHub - SmileyChris/django-countries. GitHub - coderholic/django-cities: Countries and cities of the world for Django projects. Navigation in django. Quickstart — Requests 2.12.1 documentation. Eager to get started? 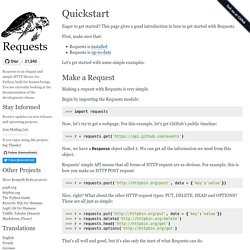 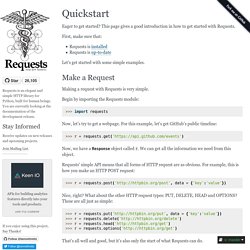 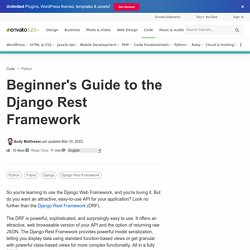 But you want an attractive, easy to use API for your application? Look no further than the Django Rest Framework (DRF). The DRF is powerful, sophisticated, and surprisingly easy to use. It offers an attractive, web browseable version of your API, and the option of returning raw JSON. The Django Rest Framework provides powerful model serialization, display data using standard function based views, or get granular with powerful class based views for more complex functionality. When working with Python applications, it's always a good idea to sandbox your development with a virtual environment. Extender plantillas · Django Girls Tutorial. El libro de Django 1.0. TAGS. This document describes Django’s built-in template tags and filters. It is recommended that you use the automatic documentation, if available, as this will also include documentation for any custom tags or filters installed. Built-in tag reference¶ autoescape¶ Controls the current auto-escaping behavior.

This tag takes either on or off as an argument and that determines whether auto-escaping is in effect inside the block. When auto-escaping is in effect, all variable content has HTML escaping applied to it before placing the result into the output (but after any filters have been applied). The only exceptions are variables that are already marked as “safe” from escaping, either by the code that populated the variable, or because it has had the safe or escape filters applied. Sample usage: {% autoescape on %} {{ body }}{% endautoescape %} block¶ Index — Python 3.5.2 documentation. Navigation Index Index pages by letter: Symbols | _ | A | B | C | D | E | F | G | H | I | J | K | L | M | N | O | P | Q | R | S | T | U | V | W | X | Y | Z Full index on one page (can be huge)

Django Custom Dashboard Easy (Example) On other day, i struggle with django. WOW. I need a quick dashboard not all that apps lists. 5. Data Structures. This chapter describes some things you’ve learned about already in more detail, and adds some new things as well. 5.1. More on Lists The list data type has some more methods.

Al igual que tus películas, música o fotos. Login: PythonAnywhere. The Django admin site. One of the most powerful parts of Django is the automatic admin interface. It reads metadata from your models to provide a quick, model-centric interface where trusted users can manage content on your site. The admin’s recommended use is limited to an organization’s internal management tool. It’s not intended for building your entire front end around.

The admin has many hooks for customization, but beware of trying to use those hooks exclusively. If you need to provide a more process-centric interface that abstracts away the implementation details of database tables and fields, then it’s probably time to write your own views. Django Girls Tutorial. PythonAnywhere te ha dado un dominio gratuito, pero tal vez no quieras tener ".pythonanywhere.com" al final de la URL de tu blog.