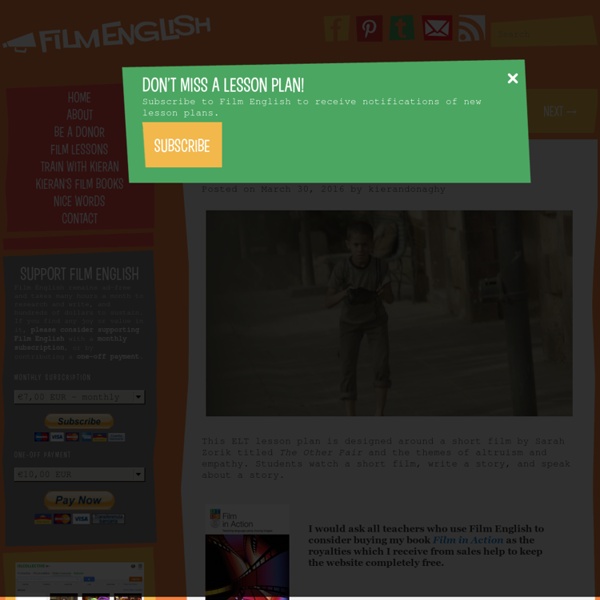 This ELT lesson plan is designed around a short film by Sarah Zorik titled The Other Pair and the themes of altruism and empathy. Students watch a short film, write a story, and speak about a story. I would ask all teachers who use Film English to consider buying my book Film in Action as the royalties which I receive from sales help to keep the website completely free. Language level: Pre-intermediate (A2) –Intermediate (B1) Learner type: All ages Time: 60 minutes Activity: Watching a short film, writing a story, and speaking about a story Topic: Empathy and altruism Language: Vocabulary related to shoes, narrative tenses Materials: Short film Downloadable materials: the other pair lesson instructions Support Film English Film English remains ad-free and takes many hours a month to research and write, and hundreds of dollars to sustain. Step 1 Ask your students to come up with as many different types of shoes as they can in 2 minutes. Step 2 Elicit boots, trainers, slippers, flip-flops, etc. Step 3

The Boy Who Learned To Fly This ELT lesson plan is designed around the theme of the Olympic Games and a short film based on the life of Usain Bolt film created by Moonbot Studios and commissioned by Gatorade. In the lesson students speak about sports and the Olympic games, watch a short film, retell a story and write a summary of a story. I would ask all teachers who use Film English to consider buying my book Film in Action as the royalties which I receive from sales help to keep the website completely free. Language level: Intermediate (B1) – Upper Intermediate (B2) Learner type: Teens and adults Beloved teen Sam Berns dies at 17 after suffering from rare disease Saturday night could have been a moment for Sam Berns to celebrate -- standing in the middle of Gillette Stadium, flanked by some of his beloved New England Patriots, and no doubt cheered heartily by the nearly 70,000 fans surrounding him. But it wasn't to be. Instead of having Berns as an honorary captain in their NFL playoff with the Indianapolis Colts, the Patriots held a moment of silence for the young man who inspired them and many others as he lived with progeria, which causes premature, accelerated aging. "Do it for Sammy!" one man yelled, piercing the quiet, in video of the ceremony on Boston.com.

Powerful films from 5 young people: What health inequality looks like in the US By Michael Painter. For some of us, it’s easy to choose to be healthy. We can’t control whether disease or accidents strike, but we can decide where we live and what we eat, as well as if, when and how much we’ll exercise. Some of us live in a culture of health — a time and place where, for the most part, we have the real hope and opportunity to live a healthy life. But for many more of us, it isn’t — we don’t have that choice. The Notebook This EFL lesson is designed around a beautiful short film by Greg Gray and the theme of household chores. Students learn and practise vocabulary related to household chores, talk about household chores and watch a short film. Language level: Pre-intermediate (A2)- Intermediate (B1) Learner type: Teens and adults

Teaching Ideas Genre(s): Adventure A young girl helps a tiny boy to fly home before it's too late! Use this delightful animated film in your classroom with our collection of cross-curricular teaching ideas and activities! What’s on your mind? This EFL lesson is designed around a short film by Shaun Higton and the theme of Facebook. Students practise vocabulary related to social media, watch a short film, and talk about Facebook. Step 1 Give the students the social media vocabulary worksheet. Pair the students and ask them to read the sentences and try to work out the meaning of the words and expressions in bold.

Woman Undergoes Bizarre Body Changes In Short Film Barbara is a passionate writer and animal lover who has been professionally blogging for over 10 years and counting. While Anna is preparing for a first date with Henry, a man she has secretly loved for years, everything goes wrong until she discovers the impossible — she’s suddenly able to sculpt her appearance like clay to any shape she desires. Written and directed by Sandy Widyanata,”Plastic” is a popular short film that was released in 2008. It delves into the issue of women’s body image issues and the power of self acceptance. Watching Anna manipulate her face and body in her bathroom — pulling at her nose until it reaches the perfect point, stretching her neck like a giraffe until it’s long and thin — is bizarre, comical and even creepy at times.

A Single Life This ELT lesson plan is designed around a short film by Job, Joris & Marieke and the theme of stages of life. In the lesson students practise vocabulary related to the stages of life, discuss stages of life, watch a short film, and speak and write about it. Support Film English Film English remains free and takes many hours a month to research and write, and hundreds of dollars to sustain. If you find any joy or value in it, please consider supporting Film English with a monthly subscription, or by contributing a one-off payment. Language level: Intermediate (B1) – Upper Intermediate (B2)

The Seven Best Short Films for ELT Students - Kieran Donaghy I’ve been writing lesson plans designed around short films for my website Film English for six years. Teachers often ask me how I find the short films I use in my lesson plans. The answer is quite simple: I’ve watched literally thousands of short films and developed an instinct for the type of engaging and simple short films which will work in the ELT classroom. In this article I’d like to share what for me are the seven best short films for the language classroom. The Mirror The Mirror is a short film by Ramon and Pedro which tells the story of a boy’s journey from childhood to old age.

Look Up This EFL lesson is designed around a short film and poem by Gary Turk and the theme of isolation caused by the use of new technology. Students watch a short film with no sound and speculate about the story it tells, read a poem and discuss digital technology, social media and isolation. I would ask all teachers who use Film English to consider buying my book Film in Action as the royalties which I receive from sales help to keep the website completely free. Language level: Upper Intermediate (B2) – Advanced (C1) Learner type:Teens and adults Time: 90 minutes Life Lessons From Richard Branson This transcript has been automatically generated and may not be 100% accurate. ... even among the small group of entrepreneurs and businessmen who achieved his level of success ...