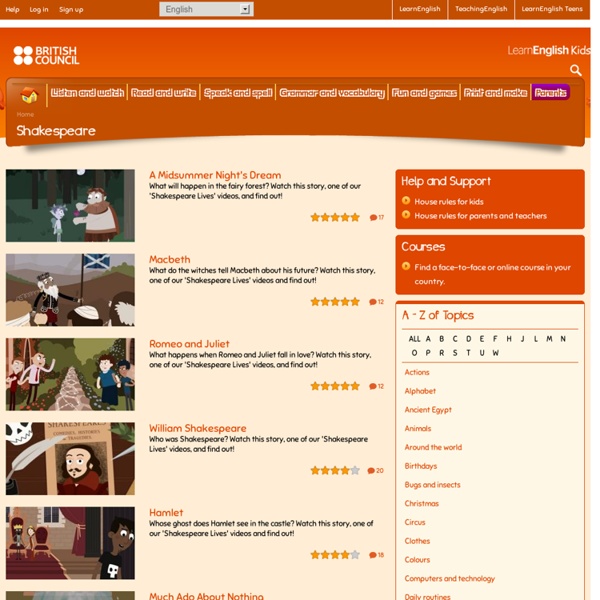 Related:  Shakespeare • Clips for the classroom

Sea Shepherd Did to a Swimming Pool What Humans Do to the Oceans Plastic pollution is recognized as a massive, global environmental issue, responsible for the deaths of over a million marine animals each year. It is a danger to all marine life including birds, sharks, turtles and marine mammals, causing injury and death through drowning, entanglement, or starvation following ingestion. It is also a danger to human life. webenglish Warm-up Introduction to Shakespeare (<2:00) Pictures and phrases introducing main topics around a Shakespeare ThemeShakespeare Lives in 2016 (2:36) Introducing the year of celebration, 400 years after S’s deathIs Shakespeare Relevant to Modern Audiences? (1:49) Introductory Video, created using PowToon Songs

Human the movie HUMAN, a film by Yann Arthus-Bertrand. Turn on the Closed Captions (CC) to know the countries where the images were filmed and the first name of the interviewees. What is it that makes us human ? Is it that we love, that we fight ? That we laugh ? englishclassinperformance Welcome to the English Class in Performance website. Here, you will find abridged versions of Shakespeare's plays, edited and with added stage directions in order to be easily performed or studied by a high school English class. They are free to use and distribute subject to the liscence given at the bottom of the page. Learning by Doing

Free Resources Close If you are trying to view the videos from inside a school or university, your IT admin may need to enable streaming on your network. Please see the Internet Filtering section of our Technical Requirements page. DVDs AND OTHER COPIES Ten ways in which Shakespeare changed the world Back in 2012, the British Library displayed a rare book that attracted as much media attention as a Gutenberg Bible. It was a mass-produced edition of a text once owned by Nelson Mandela, inked with his pen. Mandela had kept this volume by his bedside for more than 20 years and it had sustained him through his darkest hours on Robben Island. Video for the English classroom For the language teacher, YouTube may be nothing less than one of the best sources of material the classroom has ever seen. In this article, I would like to share 12 clips that I have used in my own classroom. I hope that each clip will be representative of a type of video that may be of particular interest to language teachers. Note: In this article, we will be examining a number of clips that are hosted on the video-sharing site YouTube.

Shakespeare's last act: a torrent of twisted fantasies Most of us think of Shakespeare as an Elizabethan. It’s almost impossible not to. Try imagining Shakespeare in Love ending with a cameo appearance by Simon Russell Beale as King James rather than with Judi Dench’s Queen Elizabeth. But Shakespeare was as much a Jacobean writer as he was an Elizabethan one, and to forget that is to distort the trajectory of his career and play down the quite different set of challenges he faced in the decade following the death of Elizabeth in 1603.

Seven Best Short Films to Introduce Values - Kieran Donaghy In an increasingly hyper-competitive and individualised world where isolation and loneliness are more and more prevalent, the role of universal values such as altruism, authenticity, community, compassion, creativity, determination, fairness, honesty, generosity, kindness, optimism, respect, responsibility, self-respect, tolerance, and wisdom in education is becoming increasingly important. Short films are a wonderful and engaging medium through which to introduce values into the classroom and to encourage students to reflect on values. How to Become a Better Person How to Become a Better Person created by Tracy Foster for The School of Life is a lovely animation which explores the values and virtues important in the modern world.

To be or not to be? Prince Charles has the answer in fun sketch! - FluencyOnline.Com Watch Prince Charles join a stellar cast of actors on stage including Sir Ian McKellen, Dame Judi Dench and Benedict Cumberbatch in a sketch about where to place the emphasis when delivering the lines 'To be or not to be!' from Hamlet. The sketch formed part a program that the Royal Shakespeare Theatre in Stratford-upon-Avon, used to mark the 400th Anniversary of Shakespeare's passing with this unique event. 'The event took place in the presence of their Royal Highnesses the Prince of Wales and the Duchess of Cornwall and celebrated Shakespeare's extraordinary legacy and his enduring influence on all performance art forms - from opera to jazz, dance to musicals.' BBC 2

Forget John Lewis, this is the saddest Christmas ad you'll ever see Handkerchiefs at the ready: the German supermarket chain Edeka has aired a Christmas ad that could top John Lewis’s “Man on the Moon” as this season’s biggest tear-jerker. In the ad, which has been viewed on YouTube almost 10m times, a lonely old man comes up with drastic measures to bring his family together: he fakes his own death. It starts with the man, played by British actor Arthur Nightingale, receiving a voicemail from his daughter telling him that, once again, the family won’t make it home for Christmas. He sits alone at the dinner table, enduring yet another lonely Christmas.