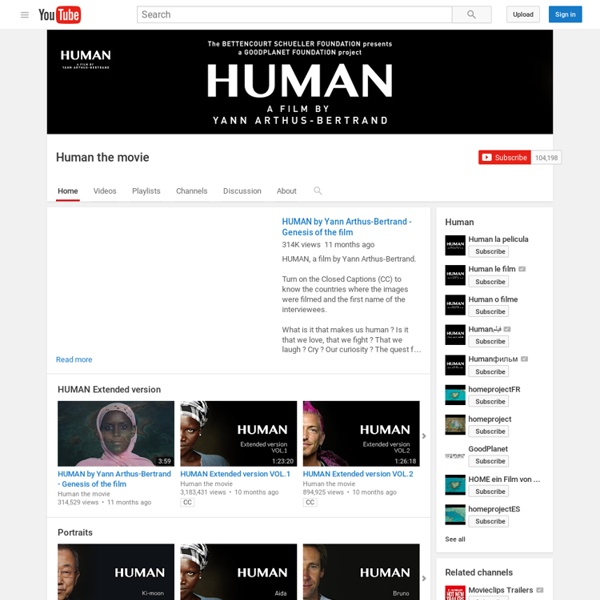 HUMAN, a film by Yann Arthus-Bertrand. Turn on the Closed Captions (CC) to know the countries where the images were filmed and the first name of the interviewees. What is it that makes us human ? Is it that we love, that we fight ? That we laugh ? Cry ? In order to share this unique image bank everywhere and for everyone,HUMAN exist in several version : A theatre version (3h11) , a tv version (2h11) and a 3 volumes version for the web. CONTACTSOffice Yann Arthus-Bertrand : Yann2@yab.frProject manager: jessica@human-themovie.orgHead of international screenings and distribution : lara@human-themovie.orgFrench events and non-commercial distribution : event@human-themovie.org Official website HUMAN : For further contents, visit and share #WhatMakesUsHUMANWatch the full film from September 12 at All these shoots were carbon-offset through the GoodPlanet Foundation’s United Carbone Action program: Show less

Free Resources Close If you are trying to view the videos from inside a school or university, your IT admin may need to enable streaming on your network. Please see the Internet Filtering section of our Technical Requirements page. DVDs AND OTHER COPIES Sea Shepherd Did to a Swimming Pool What Humans Do to the Oceans Plastic pollution is recognized as a massive, global environmental issue, responsible for the deaths of over a million marine animals each year. It is a danger to all marine life including birds, sharks, turtles and marine mammals, causing injury and death through drowning, entanglement, or starvation following ingestion. It is also a danger to human life. We're beginning to question the idea of species – including our own By Kate Douglas S. Entressangle/E.

Video for the English classroom For the language teacher, YouTube may be nothing less than one of the best sources of material the classroom has ever seen. In this article, I would like to share 12 clips that I have used in my own classroom. I hope that each clip will be representative of a type of video that may be of particular interest to language teachers. Note: In this article, we will be examining a number of clips that are hosted on the video-sharing site YouTube.

Photographer Takes Pictures Of Women Before, During, & After Orgasm – Here’s Why The Facts:Two concerning clinical studies in four years show that Tylenol kills pain and human empathy. This article was written by Sayer Ji, Founder of greenmedinfo.com where it was originally published, posted here with permission.Reflect On:Why do we continue to take such substances without questioning them, without even being aware that they're harmful? Why is it so hard to believe that they are and could be harmful and detrimental to our health in the long run? When will we learn? Synthetic, patented chemicals have profound unintended, adverse health effects which take decades to be recognize, long after exposed populations have suffered profoundly.

Forget John Lewis, this is the saddest Christmas ad you'll ever see Handkerchiefs at the ready: the German supermarket chain Edeka has aired a Christmas ad that could top John Lewis’s “Man on the Moon” as this season’s biggest tear-jerker. In the ad, which has been viewed on YouTube almost 10m times, a lonely old man comes up with drastic measures to bring his family together: he fakes his own death. It starts with the man, played by British actor Arthur Nightingale, receiving a voicemail from his daughter telling him that, once again, the family won’t make it home for Christmas. He sits alone at the dinner table, enduring yet another lonely Christmas.

lifehack In 2011, the Finnish Tourist Board ran a campaign that used silence as a marketing ‘product’. They sought to entice people to visit Finland and experience the beauty of this silent land. They released a series of photographs of single figures in the nature and used the slogan “Silence, Please”. A tag line was added by Simon Anholt, an international country branding consultant, “No talking, but action.”In 2011, the Finnish Tourist Board ran a campaign that used silence as a marketing ‘product’. Mexican doodles I never had a class that didn’t ask if I wear a kilt when I am in my country. I wonder if Mexican teachers working away from home get asked the same thing about sombreros. This is a silly game that I remember from my childhood. Yale neuroscientists have debunked the idea that anyone's personality is normal On Saturday, students and activists will rally in Washington, DC for the March For Our Lives to protest against gun violence. Planning for the rally (and 800-plus others worldwide) began the week after a Feb. 14 school massacre at Marjory Stoneman Douglas High School in Parkland, Florida, where a gunman killed 14 students and three educators. In the days that followed, student survivors quickly mobilized to form the #NeverAgain movement, and have emerged as national voices in the growing movement to reform US gun law.