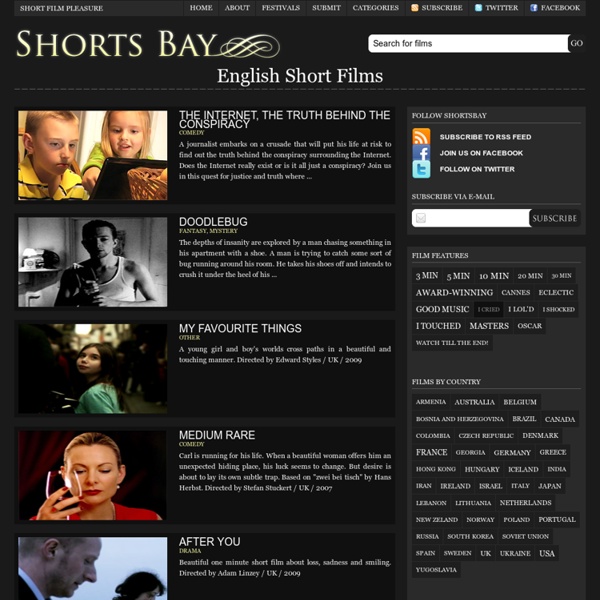 Top 100 Youtube videos for EFL! Youtube recently celebrated its 5th anniversary. Wow! See the video karaoke I made with Breakingnewsenglish content. However, today, in honor of youtube and what it does for our classrooms – I’ll leave you with a great gift. Video for the English classroom For the language teacher, YouTube may be nothing less than one of the best sources of material the classroom has ever seen. In this article, I would like to share 12 clips that I have used in my own classroom. I hope that each clip will be representative of a type of video that may be of particular interest to language teachers. Note: In this article, we will be examining a number of clips that are hosted on the video-sharing site YouTube. Unfortunately, the site is blocked in a number of countries and in such cases the clips will not be accessible.

Best Short Films By Country Vertical Menu with CSS3 Css3Menu.com The best short movies by country or continent. Watch the best shorts from USA, Europe, India, Asia, Canada, Australia, South America and Africa! Pixels by Patrick Jean (2010) (France) (2m) * Though set in New York, Pixels is an example of the best from Europe and France. French filmmaker Patrick Jean had made several short animations before hitting the big time with Pixels. The Image Hollywood Created of Africa After viewing Mama Hope's video, "Alex Presents Commando," Gabriel, Benard, Brian and Derrik (the Kenyan men in this video) told us they wanted to make one that pokes fun at the way African men are portrayed in Hollywood films. They said, "If people believed only what they saw in movies, they would think we are all warlords who love violence." They, like Mama Hope, are tired of the over-sensationalized, one-dimensional depictions of African men and the white savior messaging that permeates our media. They wanted to tell their own stories instead, so we handed them the mic and they made this video.

Super Teacher Worksheets STW Filing Cabinet Logged in members can use the Super Teacher Worksheets filing cabinet to save their favorite worksheets. Quickly access your most commonly used files AND your custom generated worksheets! Please login to your account or become a member today to utilize this helpful new feature. :) [x] close This document has been saved in your Super Teacher Worksheets filing cabinet. Here you can quickly access all of your favorite worksheets and custom generated files in one place! The Best Online Short Films of 2014 This year was great for ​shorts. Whether you were learning about ​the most dangerous sport o​n earth, what it's like ​to be stuck ​in prison, or what it'd feel like to be part of a ​deadly W​estern joke, there was something for everyone. Presented below is a roundup of some of my favorite short movies from 2014. This list includes older films as long as they were released online this year, and it doesn't include any titles that have already been highlighted in my weekly ​I'm Short, Not Stupid column. Let the short film screening party begin! ​Don't Hug Me I'm Scared 2

School subjects - speaking activities Speaking activities are the most important component of English courses using communicative approach. However, it is very difficult to find quality speaking activities that would work. That is why I would like to publish a speaking activity here once a week. All the activities will be based on the recommendations given by Keith S. Folse in his wonderful book The Art of Teaching Speaking. ADVERT: Film Analysis Paragraph 1: Offer your overall impression of the film while mentioning the movie's title, director, and key actors. Paragraph 2: Summarize the plot of the film Paragraph 3: How did the actors portray key character roles? Did they fulfill your expectations given your knowledge of the original novel or play (if one exists)?

Forget John Lewis, this is the saddest Christmas ad you'll ever see Handkerchiefs at the ready: the German supermarket chain Edeka has aired a Christmas ad that could top John Lewis’s “Man on the Moon” as this season’s biggest tear-jerker. In the ad, which has been viewed on YouTube almost 10m times, a lonely old man comes up with drastic measures to bring his family together: he fakes his own death. It starts with the man, played by British actor Arthur Nightingale, receiving a voicemail from his daughter telling him that, once again, the family won’t make it home for Christmas.

Grammar Games - Irregular Verbs Practise the irregular verbs in the following quiz. Irregular verbs - Quiz 5 Choose the correct answer and shoot the bad ducks. 15 Great Short Films Movies and TV Over the last century, cinema has played an increasingly important role in popular culture, combining visual media, soundtrack, and dialogue to mix together three of the biggest components of art: visual art, music and prose. However, with all the attention given to feature length films, short film is often overlooked.