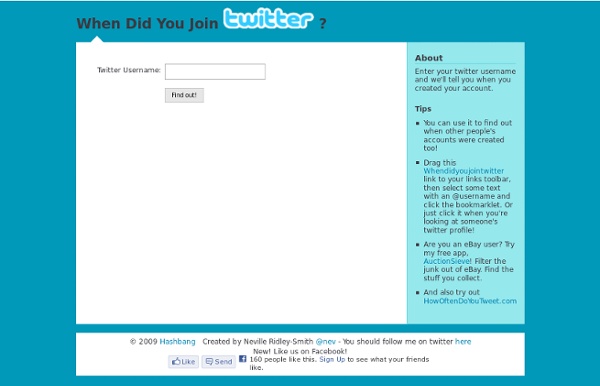 Here's The REAL Reason Twitter's Mobile Ad Revenue Is Crushing Facebook's In 2012 Can you believe this eMarketer stuff? Bloomberg's Katy Finneran just tweeted: "BREAKING: #Twitter's 2012 mobile ad revenue exceeds Facebook's 2012 mobile ad revenue, $129.7 million to $72.7 million." The numbers, it seems, are based on year-end predictions from eMarketer. Welcome to Twitalyzer Twitalyzer's Data Use and Privacy Policy Twitalyzer makes use of publicly available data in all cases, regardless of source. We rely on public Twitter streams, publicly available data from Klout, PeerIndex, and Rapleaf, and reserve the right to add other data from the public domain from time to time.

Topsy With iOS 9, Search lets you look for content from the web, your contacts, apps, nearby places, and more. Powered by Siri, Search offers suggestions and updates results as you type. There are two ways to use Search on your iOS device. Quick Search Drag down from the middle of the Home screen and type what you're looking for. Siri Suggestions

Anti-Zuma lobby meet to decide leaders Anti-Zuma lobby meet to decide leaders ANC leaders from eight provinces, all of whom are opposed to President Jacob Zuma’s leadership, met last night in an attempt to agree on who their candidates for the party’s top six positions should be. Sources with knowledge of the meeting told City Press that while the leaders agree Deputy President Kgalema Motlanthe should be their presidential candidate, they fear his reluctance might sink their campaign. Tweet-o-Meter - Giving you an insight into Twitter activity from Is it true that, "New York is the city that never sleeps!"? Do Londoners send more Tweets than New Yorkians'? Is Oslo a bigger Tweeter than Munich? Is Tokyo as much into Tweets as Barcelona?

[Case Study] Beyond engagement : the social metrics you ignore Beyond Engagement: The Social Media Metrics You Ignore [Webinar Recording] Kevin Shively Blogger Extraordinaire Simply Measured Yesterday, we hosted a brand new webinar Beyond Engagement: The Social Media Metrics You Ignore. The insight and advice from our two speakers, Ron Schott and Kristin Dean, was incredibly valuable, walking through different metrics, and examples of brands that find success by using engagement as a foundation for other types of measurement. Below are both the recording and the slide deck from the webinar. If you attended the webinar, you’re aware that a technical issue caused a delay after the first couple slides. We’ve edited that section down, so the recording should be a seamless experience.

Possible severe thunderstorms and heavy rainfall expected Posted on 05 September 2012. The combination of a rapid forming cut-off low system (see figure 1) over the central interior of the country, supported by the intensified trough at the surface (see figure 2) has the potential to result in possible heavy falls along the KwaZulu Natal coast from today into Thursday. The rapid formation of these systems could also result in possible severe thunderstorms, with either one or a combination of the following: strong gusty winds, lightning and localised flash flooding over the extreme eastern parts of North West Province, south-western Limpopo, western Mpumalanga, eastern Free State, western KwaZulu Natal as well as Gauteng as indicated in figure 3. According to the South African Weather Service’s alert category, weather watches have been issued according to the expected hazardous weather. A watch indicates a moderate risk that the hazardous weather condition will occur and that the all relevant stakeholders and the public should “Be Prepared”.