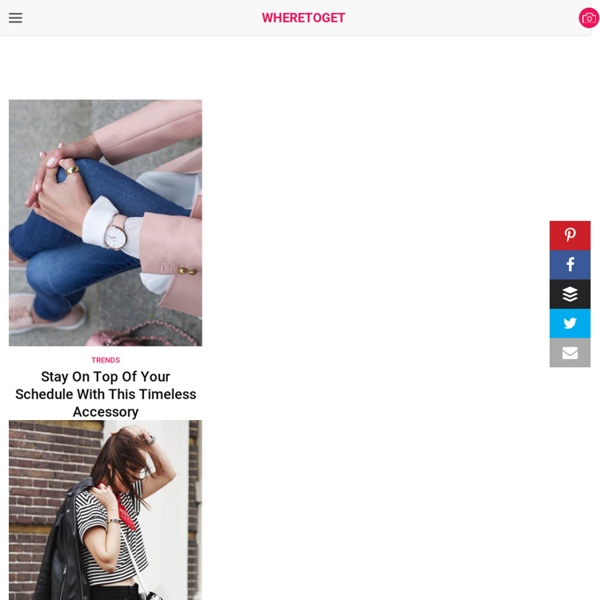 Your guide to choose the best garden rake View 800% 400% 200% 150% 125% 100% 75% 50% Full Width Full Height Full Page Show Text Boutiques.com - Shop boutiques curated by style icons and you - Designer Shoes, Dresses, Handbags MoreEven more from Google Sign in Top Tech Products 1 – 6 of 6 Apple iPhone 7 Microsoft Xbox One The Bag Hag Diaries Milan Fashion Week: Roberto Cavalli, FW 2014- 15 One of the most memorable shows during Milan married the “wow” factor of a collection presentation with the collection itself, and Roberto Cavalli seems to have excelled in both. The show was hot– both literally and figuratively, as it had elements of both fire and water. Best Bags at Paris Fashion Week Fall/Winter 2014-15 - The CoF Best Bags at Paris Fashion Week Fall/Winter 2014-15 Last week ended Paris Fashion Week Fall 2014 and with it the first fashion week season of this year. Now is the time to draw the line and do a recap of the most impressive bags presented by the French designers for autumn/winter 2014-15 season. Crocodile leather and tweed, neon colors, lettering and classic monogram, briefcases, suitcases and even designer plastic bags and baskets for food, there is something for every taste and occasion!

Inspiration Boards « Style Me Pretty : The Ultimate Wedding Blog Inspiration Boards Planning your wedding and using the web as your inspiration starting point, basically means that you’ll be on total style overload for quite some time. With all of the gorgeousness out there, it’s nearly impossible to describe what photography style fits you, what the perfect place setting looks like, what the exact right shade of blue for your bridesmaid dresses is.

Knuckle dusters: midi-rings get a real renaissance - Fashion - Life & Style “Be it a delicate band or understatedly decorated, the finger adornment for the season is the midi ring,” says Ashkin Yolsal, buying manager of Topshop’s Freedom jewellery concession. Whether you know them as knuckle rings, tea rings or memory rings, they originated in the Renaissance era, when they signified wealth. Wearing a knuckle ring, placed in the less flexible area immediately above your knuckle, showed you didn’t work in the fields. And, in fact, you could wear as much jewellery as you wanted — layering the bands up and down your fingers. You can spot them in Bernhard Strigel’s Portrait of a Woman, painted between 1500 and 1525, which features a well-to-do woman resplendent in a bejewelled collar and, you guessed it, a knuckle ring. One of the reasons for their return seems to be the never-ending trend of nail art.

Shoes At Milan Fashion Week Fall/Winter 2014 - 2015 When it comes to shoes, Milan fashion week has been our favorite. Not only the design is fascinating, but also the engineeing is memorable. For fall/winter 2014-2015, Italian shoe designers turned into a little more casual than the glitzy glamour in the past. Marni, the label that well known for jazzy flat, decorated their flats with colorful stones, metal edge & caps. Gucci went all out on python prints.

Shoes trends for Fall/Winter 2013-2014 The shoes trends for Autumn / Winter 2014 are extremely varied, so that everyone can find something for his taste. Here's what we found on the catwalks. Pointy Toe Shoes The pointy models are coming back with a shiny effect. Moff™, Makers of the Wearable Smart Toy, Introduces SDK to App Developers at SXSW Austin, TX (PRWEB) March 12, 2015 Moff™, the startup that created the wearable smart toy, is today announcing the introduction of the Moff Software Development Kit (SDK). The Moff SDK will provide iOS app developers with access to Moff’s proprietary motion and position recognition library. In addition, the Moff SDK delivers access to Moff’s Bluetooth connection manager software. The Tokyo MotionControl Network, an open community of developers focused on sensors and Internet of Things (IoT), is showcasing the first prototype app developed using the Moff SDK. The new “Toothbrushing App” employs Moff’s Bluetooth LE manager and motion and position library in order to gamify a child’s daily chore of toothbrushing, while encouraging fun and good habits.