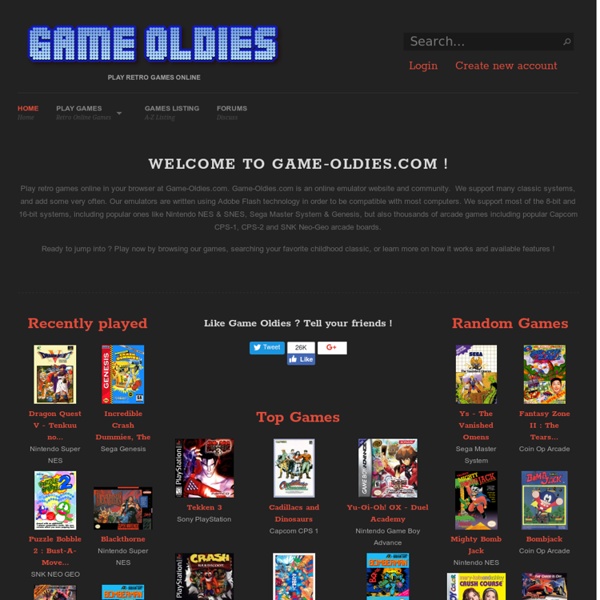 Kongregate: Play free games online The Internet Arcade : Free Software by Williams software eye favorite 227 comment 19 Defender is an arcade video game developed and released by Williams Electronics in February 1981. by Sega favorite 54 comment 8 Astro Blaster is a shoot 'em up arcade game released by Sega in 1981. by Mylstar favorite 36 comment 2 The Three Stooges, fully titled as The Three Stooges in Brides is Brides on the title screen, is a 1984 arcade game by Mylstar Electronics. by Stern Electronics favorite 100 comment 17 Berzerk is a multi-directional shooter video arcade game, released in 1980 by Stern Electronics of Chicago. favorite 243 comment 13 INSTRUCTIONS Joust is a platforming game where the player controls a yellow knight riding a flying ostrich or stork, from a third-person perspective. by Atari Games favorite 129 comment 10 Indiana Jones and The Temple of Doom is a 1985 action arcade game developed and published by Atari Games, based on the 1984 film of the same name, the second film in the Indiana Jones franchise. favorite 52 comment 4 favorite 11 by Orca

SSega | Play Sega Genesis | Mega drive | Games Online | Sega Games World's Biggest PAC-MAN STAR WARS: The Old Republic MMO going free to play 15th November Free to play!I will be giving it a final chance to entertain and not annoy me... any other takers? Technical Details Define your star wars Saga - Choose from one of eight iconic roles and become the hero of your personal Star Wars saga--an interactive storyline with cinematic dialogue and full voiceover for all in-game characters Choose the light or dark side - Meaningful choices throughout your journey will determine your path down the light or dark side of the Force Adventure with companions - Build or break meaningful relationships with your companions as they join in your journeys and fight at your side Engage in heroic Star Wars combat - Fight against reactive enemies in dynamic Lightsaber duels, cantina shootouts, and large-scale multi-player battles Pilot your personal starship— Earn your own ship which is your base of operations as you explore the galaxy and participate in epic space combat Discover a fully-featured MMO - Join your friends and experience player-vs.