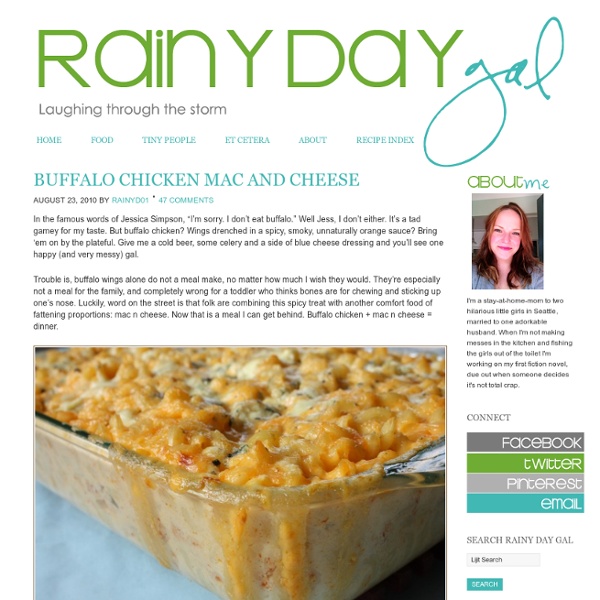 Harry Potter For our Harry Potter edition of Friday Food Craft we have some super yummy Shortbread cookies made to look like the Deathly Hallows symbol (the triangle represents the cloak, the circle is the stone and the line is the wand). I chose to cut out my cookies into triangle shapes and then press in the circle and line with the back of a knife, and a bottle cap (washed, of course). You could just as easily cut out circle or squares and draw on a symbol with some frosting or chocolate. Homemade Baked Mozzarella Sticks Mozzarella sticks are a delicious treat, probably one of the most popular appetizers at restaurants, and a fun party food. They tend to be rather fattening, especially considering they are usually fried, but they are so irresistibly tasty. So how do you give in to the temptation that is mozzarella sticks without the guilt?

LaSaGnA TiMpAnO I went to see tUnE-yArDs on Monday night with some friends, and as always we wanted to cook a meal that somehow related to the show we were heading to. Sometimes this is hard to do, but other times it seems to come naturally. Finding culinary inspiration in Merrill's lyrics seemed like it would be tough, but my sister knew what she wanted to make without hesitation. "How about something layered, because of all the vocal and instrument layering in the music?"

Valentine’s Day Treats: Red Velvet Cheesecake Brownies Written By: Julia Mercier Decadent Red Velvet Cheesecake Brownies 393 Whether you’re baking for your spouse, friend, or family this Valentine’s Day, share your love by giving this decadent red dessert. It breaks away from the typical holiday recipes with bright swirls of red brownie and cheesecake batter.No need to be an expert in the kitchen either- this rich, irresistible dessert only requires a few basic steps. With this recipe, red velvet cheesecake brownies may quickly become the new favorite in your house. Make Your Own Girl Scout Cookies Make Your Own Girl Scout Cookies, Sans The Artificial Ingredients Whether you want to avoid some of the highly-processed ingredients (like trans fats and palm oil) or you just can’t wait for the annual cookie sale, we’ve got some simple ways to make healthier versions of these classic treats. Why Make Your Own Though Girl Scout cookies boxes say “trans-fat free,” the term is officially defined by the FDA as a food that contains less than 0.5 grams of trans fat per serving, meaning some varieties — including uber-popular Thin Mints, Samoas and Tagalongs — still contain trace amounts of the fat. The giveaway: Look for “partially-hydrogenated” on the ingredient list.

The Pastry Affair - Home - Cauldron Cakes This is part II of my mini-series on Harry Potter snacks from the books brought to life (part I is on Honeydukes treats, part III features every wizard's favorite drink—butterbeer!— and part IV showcases decadent butterbeer cupcakes). When I was young, I wanted to grow up to be a writer. Chocolate Chip Lava Cookies I am so in love with these darn chocolate lava cookies! What is it about a warm, gooey chocolate chip cookie stuffed with decadent, rich, melted chocolate that makes it so irresistible?? Especially when topped with vanilla ice cream. These are one of Kev’s favorite homemade treats, and he usually asks me to make them at least once a week.

Buffalo Chicken Bites One of my favorite guilty pleasures is buffalo wings, especially dipped in blue cheese dressing. There's something about the buffalo chicken and blue cheese combo that really appeals to me and I had a craving for it lately. When I came across a recipe for ham and cheese stuffed pretzel bites, I figured I could substitute it with chicken and blue cheese.