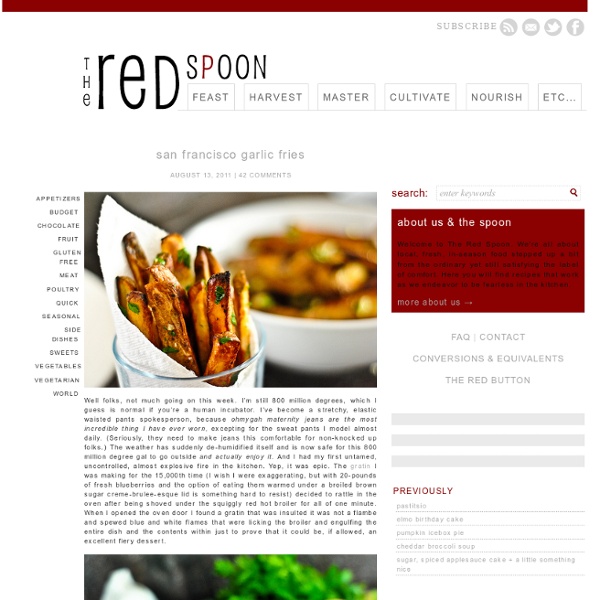 Well folks, not much going on this week. I’m still 800 million degrees, which I guess is normal if you’re a human incubator. I’ve become a stretchy, elastic waisted pants spokesperson, because ohmygah maternity jeans are the most incredible thing I have ever worn, excepting for the sweat pants I model almost daily. (Seriously, they need to make jeans this comfortable for non-knocked up folks.) The weather has suddenly de-humidified itself and is now safe for this 800 million degree gal to go outside and actually enjoy it. And I had my first untamed, uncontrolled, almost explosive fire in the kitchen. Ummm, uhhhhh. Thankfully the flour explosion that played out in my mind was not needed as a few huffs and puffs calmed the fire and eventually put it out. The bad: I am now squeamish around my oven. Glad that is over. One Year Ago: Thyme and Gruyere Crackers San Francisco Garlic Fries Adapted from Bon Appetit, August 2011 Serves 4 Preheat oven to 450-degrees.

Baked Egg Boat recipe Breakfast is my favorite meal. I like to drink iced coffee and watch the cream climb its way down the chunky ice cubes in a dazy before the caffeine hits. I like to order bacon with whatever I’m eating. I like eating potatoes with ketchup. Bacon Potato Hash: Shall we start the day off with some potato hash? Yeah I kinda thought so. Let’s face it. Any recipe can achieve greatness by adding bacon. elephantine: the baked mac and cheese My favorite thing to eat, hands down, is noodles. Italian, Chinese, Japanese, Thai... whatever way you make it, I like it. But mac and cheese is high up there on the list, especially baked mac and cheese. Is there anything more comforting? roast chicken with dijon and meyer lemon I have decided it’s time to face some fears in order to be more self sufficient and more cost effective in the kitchen. My first begrudging task was chicken. I’m not a big chicken eater, I much prefer a steak, especially one with a red wine jus, but chicken is cheaper than most of the fillet mignon I stare down at the butcher hoping my laser eye force will somehow knock ten dollars off the price, but alas I still need to hone that skill, as it has yet to work. So chicken. It’s cheaper, it’s healthier, and frankly you can’t really bag on dark meat, it’s always good. So in order to get more bang for my buck I decided to drop my chicken hatred flag.

Parmesan Roasted Potatoes Ok fine. I’m officially ready to make the transition to fall. And I thought, what better way to do it than with my all time favorite Parmesan Roasted Potatoes! These are like candy. 100% addictive. Mongolian Beef I LOVE P.F. Changs but it can be a little pricy for what you actually get. I have been making this recipe for YEARS now and I always get rave reviews. Most people who have it say they actually like it MORE than P.F. Changs. You can make this dish for the entire family for the same price as one of these as a menu item! Pizza Stuffed Pretzels As a stay at home mom, I tend to eat whatever I can find for lunch. The only exception is when I have friends over for lunch dates. Normally, I'll have lunch already prepared before my friends arrived but that wasn't the case the other day. My friend Suzanne came over recently and I had nothing really ready.

Peanut Butter Pie I made this pie today as a tribute to a fellow food blogger. One whom I've never met, but who's blog, In Jennie's Kitchen, I've been reading for longer than I've had my own. Tragically, her husband passed away this past Sunday...suddenly, of a heart attack. The food blog community immediately took to the internet, reaching out, wanting to know what they could do to help her. chicken and mushroom marsala This is one of those recipes that I have had bookmarked, and, well forgot about it… on purpose. I passed it over because I was scared of chicken after having a run-in with a butcher experience that left my newly married, meat virgin status shaky and tormented, having recurring nightmares of exposed rib cages and raw meat; and then, well, why would you want boring old chicken when there were pulled pork sandwiches and tender pot roasts to be had? But when I did finally make this, I kicked myself in the shin and gave myself a long time-out. You see, I was afraid. Afraid of chicken, afraid I was going to be disappointed by bland, saw-dust tasting meat, and boy have I never been so happy to be wrong.

French Fries: The No-Guilt Version There’s nothing like a french fried potato. The taste, the texture, the dip-ability; it’s probably one of my favorite go-to comfort foods. However, I don’t need the fat of an actual deep fried potato, and I certainly do not favor processed french fries that come from the frozen food section of the grocery store. Enter: Healthy French Fries* Buffalo Chicken Bites One of my favorite guilty pleasures is buffalo wings, especially dipped in blue cheese dressing. There's something about the buffalo chicken and blue cheese combo that really appeals to me and I had a craving for it lately. When I came across a recipe for ham and cheese stuffed pretzel bites, I figured I could substitute it with chicken and blue cheese. That's when I decided to make these Buffalo Chicken Bites... yum!

Garlic Butter Rolls › shutterbean For those of you who swoon over garlic twisty bread but can’t bring yourself to order whole pizza to make the delivery worthwhile, this one’s for you! They are scrumptious! Dip some in marinara or serve them with a salad and pasta! You could also eat them alone, directly from your kitchen counter. No one will know. How to Make Crêpes Without a Crêperie A brief tutorial on how to make crêpes at home, no crêperie required. Just you, your stove and a bit of batter and you’ll have a plate full of thin pancakes in no time at all. I’ve always wanted to live abroad, even if just for a short time. While the dream of leaving and exploring was there, the reality was and is that I remain fully rooted in the Midwest.In college I was a single parent. In order to declare my Spanish major, I had to get the mandatory study abroad waived. Rather than live somewhere new and explore, I sat in my apartment and cooked, dreaming of leaving.

Creamy Carrot Casserole Recipe Difficulty:Easy | Total Time: | Active Time: | Makes:4 to 6 servings Carrots star in this simple, flavorful casserole. Topped with crunchy brown-butter-and-garlic-infused breadcrumbs, they’ve never been so irresistible. What to buy: Panko is coarse Japanese-style breadcrumbs, available in many grocery stores. Game plan: The breadcrumb topping can be made up to a day ahead and kept in an airtight container at room temperature. The carrots can be chopped up to a day ahead, covered with a moist paper towel, and stored in a resealable plastic bag.