How to Make Cream Cheese at Home 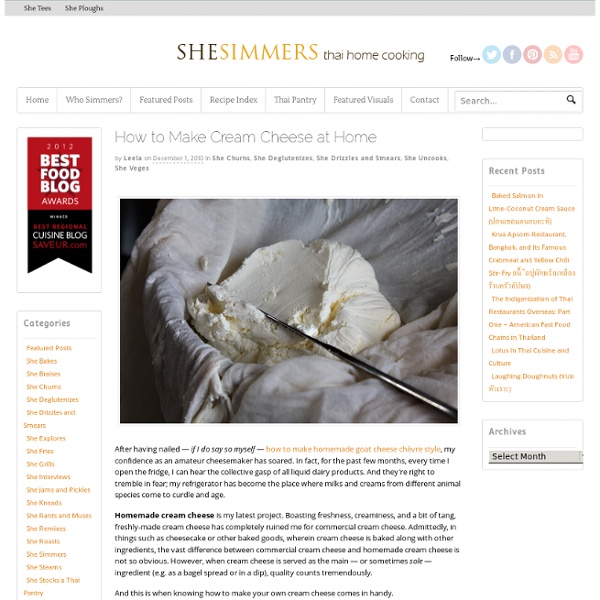 After having nailed — if I do say so myself — how to make homemade goat cheese chèvre style, my confidence as an amateur cheesemaker has soared. In fact, for the past few months, every time I open the fridge, I can hear the collective gasp of all liquid dairy products. And they’re right to tremble in fear; my refrigerator has become the place where milks and creams from different animal species come to curdle and age. Homemade cream cheese is my latest project. Boasting freshness, creaminess, and a bit of tang, freshly-made cream cheese has completely ruined me for commercial cream cheese. And this is when knowing how to make your own cream cheese comes in handy. I got help from Chef Grégoire Michaud‘s latest book, “Got Cheese?” [Added June 6th, 2011: Quite a few readers have told me about an easier way of making cream cheese which doesn't involve heating or the use of rennet. How to Make Cream Cheese at Home:Adapted from Got Cheese? Method:

Twelve Virtues of Rationality by Eliezer Yudkowsky by Eliezer Yudkowsky The first virtue is curiosity. A burning itch to know is higher than a solemn vow to pursue truth. To feel the burning itch of curiosity requires both that you be ignorant, and that you desire to relinquish your ignorance. If in your heart you believe you already know, or if in your heart you do not wish to know, then your questioning will be purposeless and your skills without direction. The second virtue is relinquishment. The third virtue is lightness. The fourth virtue is evenness. The fifth virtue is argument. The sixth virtue is empiricism. The seventh virtue is simplicity. The eighth virtue is humility. The ninth virtue is perfectionism. The tenth virtue is precision. The eleventh virtue is scholarship. Before these eleven virtues is a virtue which is nameless. Miyamoto Musashi wrote, in The Book of Five Rings: "The primary thing when you take a sword in your hands is your intention to cut the enemy, whatever the means.

Build a Cold Frame Using Old Windows You'll only need basic tools to build a cold frame. Since the cold frame will be pretty large, it's best to build it outside or in a garage, or you may not get it out the door... A hand-held drill (cordless or corded) A miter saw (powered is better, but you could do it with a hand saw and miter box) A jig saw, circular saw or table saw (really, anything that can cut large sheets of plywood) A screw driver A Tape Measure A marking implement of some sort A paint brush Two, Three or Four windows, with at least one dimension in common Some 2x2s (as required) Some 2x3s (as required) Some 2x4s (as required) Some inexpensive 1/8" or 1/4" plywood Exterior wood screws (deck screws) Exterior wood-sealing paint Some galvanized or brass hinges (may not be necessary if the hinges on the windows are still good) Some big, sturdy exterior-grade handles A tube of latex sealant A common heating vent (optional) I was fortunate enough to have a lot of the materials just lying around already.

5 Mind-Bending Facts About Dreams | Lucid Dreams & Nightmares When your head hits the pillow, for many it's lights out for the conscious part of you. But the cells firing in your brain are very much awake, sparking enough energy to produce the sometimes vivid and sometimes downright haunted dreams that take place during the rapid-eye-movement stage of your sleep. Why do some people have nightmares while others really spend their nights in bliss? Like sleep, dreams are mysterious phenomena. But as scientists are able to probe deeper into our minds, they are finding some of those answers. Here's some of what we know about what goes on in dreamland. 1. As if nightmares weren't bad enough, a rare sleep disorder — called REM sleep behavior disorder — causes people to act out their dreams, sometimes with violent thrashes, kicks and screams. 2. Staying up late has its perks, but whimsical dreaming is not one of them. In the study 264 university students rated how often they experienced nightmares on a scale from 0 to 4, never to always, respectively. 3.

A World Without People - In Focus For a number of reasons, natural and human, people have recently evacuated or otherwise abandoned a number of places around the world -- large and small, old and new. Gathering images of deserted areas into a single photo essay, one can get a sense of what the world might look like if humans were to vanish from the planet altogether. Collected here are recent scenes from nuclear-exclusion zones, blighted urban neighborhoods, towns where residents left to escape violence, unsold developments built during the real estate boom, ghost towns, and more. [41 photos] Use j/k keys or ←/→ to navigate Choose: A tree grows from the top of a chimney in an abandoned factory yard in Luque, on the outskirts of Asuncion, Paraguay, on October 2 , 2011. A bust of Confucius rests at an abandoned workshop in the town of Dangcheng in Quyang county, 240 km (150 miles) southwest of Beijing, on December 7, 2011. Ivy grows over a street in Tomioka town, Fukushima, northeastern Japan, on August 19, 2011.

Shopping Cart Build a Garden in One Day - How to Get Started One benefit of a raised bed is that you don't need to dig out all the grass. But you do need to keep grass at bay so it doesn't invade your new garden. So cover the ground with a biodegradable landscape fabric, sometimes called biodegradable weed fabric or organic weed control. When I built mine, I used the fabric method described here but still ended up with errant blades of grass poking up in the corners and in spots along the perimeter. Next, fill in the bed with topsoil until you're about 6 inches from the top.

History of Psychology: A New Twist in the Case of Little Albert In 1920, behaviorist John Watson and his graduate student-turned-wife Rosalie Rayner conducted a conditioning experiment that everyone who’s ever taken an intro psychology course knows all too well: They taught 9-month-old Albert to fear a variety of stimuli that were seemingly innocuous to him from the start. The most famous example involved a rat. When a rat was first placed alongside Little Albert, he appeared interested and unafraid. When the researchers paired the rat with a loud noise, over time, Albert got scared. In fact, Albert would start crying at the mere sight of the rat, even though the noise was gone. Watson used this experiment to substantiate his theory that babies were blank states, and the environment was powerful in influencing them. But no one knew Little Albert’s identify or his fate… until a few years ago. According to a 2010 article in Monitor on Psychology, for seven years, Hall P. Eventually, the pieces of the puzzle came together.

30+ Hardly Found Actually Funny Illustrations and Few Tutorials Wanted to do something fun today. Had to do a lot of collection in order to find the best illustration that can actually are funny. Trust me there were not many who could actually meet the criteria of being funny. Anyhow, after so much effort I had to give out something so, to keep the post worthy other than couple of laughs I thought of combining it with some useful illustration tutorials. So, if the illustration don’t give you a good laugh then try to avail the opportunity to learn and create one real funny illustration of your owns. You Might Find it Interesting: Bonus – Interesting Illustration Tutorials If you are inspired what you have seen then probably you would like to learn how to master in such skill. Create a Cute Panda Bear Face Icon Creating Bart Simpson Vector Character in Illustrator How to Illustrate a LeBron James Cartoon Character Create a Gang of Vector Ninjas in Illustrator Real World Effects in Photoshop and Illustrator Create a Tiger Striped Cat with Illustrator

Backyard Gardener, Your Gardening Information with Gardening Tips The Photojojo Store! - the Most Awesome Photo Gifts and Gear for Photographers