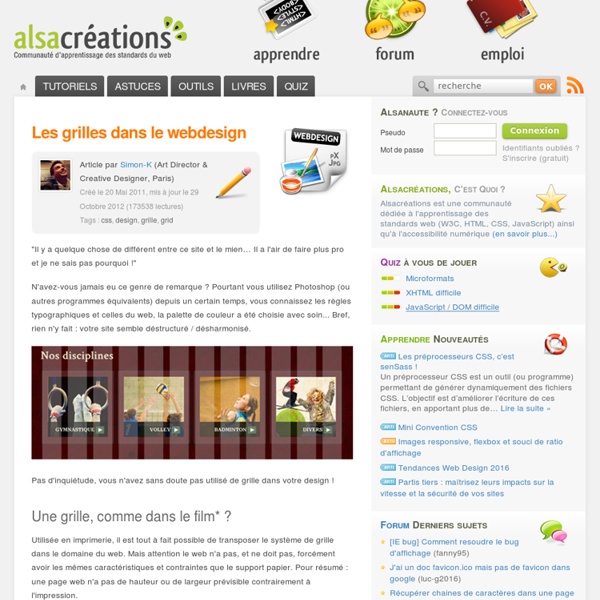 iOS Human Interface Guidelines As an app designer, you have the opportunity to deliver an extraordinary product that rises to the top of the App Store charts. To do so, you'll need to meet high expectations for quality and functionality. Three primary themes differentiate iOS from other platforms: Clarity. Throughout the system, text is legible at every size, icons are precise and lucid, adornments are subtle and appropriate, and a sharpened focus on functionality motivates the design.

css-boilerplate - A simple CSS framework. Boilerplate: noun standardized pieces of text for use as clauses in contracts or as part of a computer program. As one of the original authors of Blueprint CSS I've decided to re-factor my ideas into a stripped down framework which provides the bare essentials to begin any project. This framework will be lite and strive not to suggest un-semantic naming conventions. You're the designer and your craft is important.

Writing a Flexible Grid Script for Photoshop Being a capable web designer means having a solid grasp on grids, especially if you want to pursue responsive web design. In this tutorial we'll take a look at a Photoshop script for generating your own custom grids, plus we'll open the hood and look at how the script is actually made. It's quite likely that you've already used psd files from one grid system or another. You'll probably have opened the psd, complete with all its guides, then you'll have altered the document size to give yourself a bit of breathing room. In the case of our script, it will generate Photoshop guides irrespective of the document size.

Recruiting a Designer? Here's What You Should Know - BOLD by Pixelapse Design is a rather broad and vague term. When someone says "I'm a designer", it is not immediately clear what they actually do day to day. There are a number of different responsibilities encompassed by the umbrella term designer. Design related roles span many industries, ranging from industrial design (e.g. cars, furniture) to the traditional print industry (e.g. magazines, publications), to the new media tech industry (e.g. websites, mobile apps). Golden Section - On-screen ruler and grid This program is a unique design tool for artists, designers, programmers, photographers. It allows you to design using the golden section proportion visually over your preferred design software. Artists, architects and sculptors have been searching for the secrets of beauty throughout the centuries.To many of them it was given subconsciously, with talent. Others used previously obtained secrets. We happy to offer you this software, which makes it possible to use one of the most effectiveand finest secrets of harmony and perfection—the golden section!

Workshop / Chrome Experiments Unfortunately, either your web browser or your graphics card doesn't support WebGL. We recommend you try it again with Google Chrome. The Makings of a Great Logo - BOLD by Pixelapse Your company's logo is the fundamental foundation to your business branding. It is probably the first interaction that you will have with your customers. An effective logo can establish the right tone and set the proper ethos. After years of crafting logos for different projects, I've come up with a set of questions that I always ask myself before delivering a new logo.

GridFox - The Grid Layout Firefox Extension » Eric Puidokas » Programming and Designing for the Web GridFox is a Firefox extension that overlays a grid on any website. If you can open it in Firefox, you can put a grid on top of it. It’s easy to customize, allowing you to create the exact grid you designed your layout around. The very own digital experiences from Epic agency Kineograph As part of a project for one of our clients, it was necessary to play animations in order to make the site more lively. Very quickly we thought about using spritesheets.