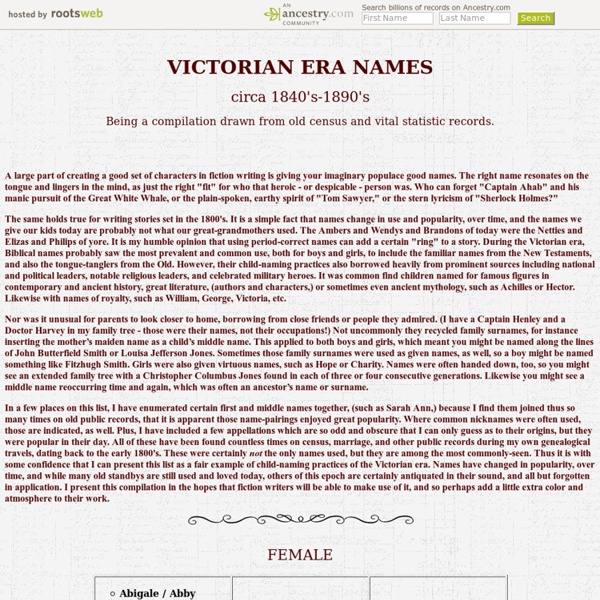 circa 1840's-1890's Being a compilation drawn from old census and vital statistic records. A large part of creating a good set of characters in fiction writing is giving your imaginary populace good names. The right name resonates on the tongue and lingers in the mind, as just the right "fit" for who that heroic - or despicable - person was. Who can forget "Captain Ahab" and his manic pursuit of the Great White Whale, or the plain-spoken, earthy spirit of "Tom Sawyer," or the stern lyricism of "Sherlock Holmes?" The same holds true for writing stories set in the 1800's. Nor was it unusual for parents to look closer to home, borrowing from close friends or people they admired. In a few places on this list, I have enumerated certain first and middle names together, (such as Sarah Ann,) because I find them joined thus so many times on old public records, that it is apparent those name-pairings enjoyed great popularity. Compiled by G.

Ladies' Page - Beauty Secrets - Victorian Page Hair - A Woman's Crowning Glory Detail from a fashion illustration of 1852 showing side ringlets and a plait on the crown of the head Victorian Hair StylesLong luxuriant hair was prized throughout the century though modes of arranging it- for the wealthier classes- varied according to the current fashion, whether rolled into thick ringlets gathered at the side or back, plaited and coiled over the head or tied at the back, or worn up in pleats. Evening coiffures for the fashionable could be very elaborate, and in the second half of the century there were times when hair attachments in the form of chignons were essential for many women, incidentally providing cartoonists with a new target. Hardy lovers will recall the much more sombre and resonant use of Mrs Charmond's secret purchase of Marty South's hair to embellish her own thinning tresses in his novel, The Woodlanders. Her hair is swept up at the back in the prevailing fashion but in a very much simpler style.

Architecture Imagine the renovation dilemmas. A huge penthouse of a converted 1930s office building in TriBeCa, New York, is to be turned into a functioning home for a family with three teenagers. In fact, we can not quite imagine the issues that faced Steven Harris Architects when the family showed up, literally, at the doorstep of the celebrated architect and asked if he’d like to work on their home. Harris said yes and proceeded to make his magic. 102 Resources for Fiction Writing « Here to Create UPDATE 1/10: Dead links removed, new links added, as well as Revision and Tools and Software sections. Are you still stuck for ideas for National Novel Writing Month? Or are you working on a novel at a more leisurely pace? Here are 102 resources on Character, Point of View, Dialogue, Plot, Conflict, Structure, Outlining, Setting, and World Building, plus some links to generate Ideas and Inspiration.

The Ultimate Guide to Writing Better Than You Normally Do. Writing is a muscle. Smaller than a hamstring and slightly bigger than a bicep, and it needs to be exercised to get stronger. Think of your words as reps, your paragraphs as sets, your pages as daily workouts. Think of your laptop as a machine like the one at the gym where you open and close your inner thighs in front of everyone, exposing both your insecurities and your genitals. Because that is what writing is all about. Wedding dress Physical description Wedding dress consisting of a cream silk satin bodice and draped and trained skirt decorated with embroidered net and artificial pearls, and a veil and a non-associated petticoat. [Bodice] Fitted bodice of silk satin. Decorated with rows of cotton machine-embroidered net, artificial pearls made from cellulose nitrate, and metal thread tassels. The pointed, elbow-length bodice is boned and lined with cotton.

Ancient underwater cities being found that are 10,000 years old Lost city 'could rewrite history' By BBC News Online's Tom Housden The remains of what has been described as a huge lost city may force historians and archaeologists to radically reconsider their view of ancient human history. Marine scientists say archaeological remains discovered 36 meters (120 feet) underwater in the Gulf of Cambay off the western coast of India could be over 9,000 years old. The vast city - which is five miles long and two miles wide - is believed to predate the oldest known remains in the subcontinent by more than 5,000 years. The site was discovered by chance last year by oceanographers from India's National Institute of Ocean Technology conducting a survey of pollution.

Joaquin 'El Chapo' Guzman Arrested: Mexico's Sinaloa Drug Chief Taken Alive MEXICO CITY (AP) — The head of Mexico's Sinaloa Cartel was captured overnight by U.S. and Mexican authorities at a hotel in Mazatlan, Mexico, the Associated Press has learned. A senior U.S. law enforcement official said Joaquin "El Chapo" Guzman was taken alive overnight in the beach resort town. The official was not authorized to discuss the arrest and spoke on condition of anonymity. Guzman, 56, was found with an unidentified woman.

Synonyms for 95 Commonly Used Words - A Mini-Thesaurus for Writers Synonyms for 95 Commonly Used Words in the English language Source for Comic Source for Synonyms PICTURE JOKES » Just some advice :) First post, 3 years in the lurking. This is me and my Papa (grandpa) He went on a trip last Friday… … and returned on Sunday to find his home of 50 years burnt to the ground.

50 Amazing Mosques From Around The World (PHOTOS) Many of these incredible houses of worship defy typical expectations about what a mosque looks like. Nontraditional minarets and experimental domes add variety, and showcase the massive potential for creativity that exists within mosque design. “Beauty surrounds us," said Rumi, a 13th century Persian poet and Sufi mystic. A look at these unusual sacred places shows the truth of his words. From Uzbekistan to Malaysia and everywhere in between, take a look at the fantastic masjids that made it onto our list. And check out this list of 50 stunning churches!

45 ways to avoid using the word 'very' Three Telling Quotes About ‘Very’ Substitute ‘damn’ every time you’re inclined to write ‘very;’ your editor will delete it and the writing will be just as it should be. ~Mark Twain‘Very’ is the most useless word in the English language and can always come out. More than useless, it is treacherous because it invariably weakens what it is intended to strengthen. ~Florence KingSo avoid using the word ‘very’ because it’s lazy. A man is not very tired, he is exhausted.

8 Tips to Nail Your Online Research via @writerspotlight Whether you are a blogger, technical writer, copywriter, journalist or anyone in-between, learning how to use the Internet for research is critical to your success. Online research gives credence to your writing. It proves to your readers that you are not just making stuff up in your writing. But, how do you use the Internet effectively for research? Online research is not mere Googling or casual Web browsing. Cheat Sheets for Writing Body Language Translate emotions into written body language We are always told to use body language in our writing. Sometimes, it's easier said than written. I decided to create these cheat sheets to help you show a character's state of mind.