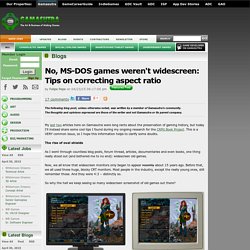 The thoughts and opinions expressed are those of the writer and not Gamasutra or its parent company. My last two articles here on Gamasutra were long rants about the preservation of gaming history, but today I'll instead share some cool tips I found during my ongoing research for the CRPG Book Project. This is a VERY common issue, so I hope this information helps to clarify some doubts. The rise of oval shields As I went through countless blog posts, forum thread, articles, documentaries and even books, one thing really stood out (and bothered me to no end): widescreen old games.

Now, we all know that widescreen monitors only began to appear recently about 15 years ago. So why the hell we keep seeing so many widescreen screenshot of old games out there? Only one of these is correct; I would bet on the one where the Round Shield is actually round. Guybrush put on some weight recently The solution. Kyle Pittman's Blog - CRT Simulation in Super Win the Game. The following blog post, unless otherwise noted, was written by a member of Gamasutra’s community. 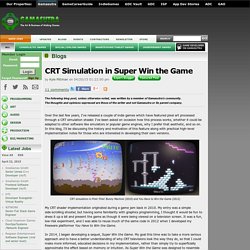 The thoughts and opinions expressed are those of the writer and not Gamasutra or its parent company. Over the last few years, I've released a couple of indie games which have featured pixel art processed through a CRT simulation shader. I've been asked on occasion how this process works, whether it could be adapted to other software like emulators or popular game engines, why I prefer that aesthetic, and so on. In this blog, I'll be discussing the history and motivation of this feature along with practical high-level implementation notes for those who are interested in developing their own versions. CRT simulation in Pink! My CRT shader implementation originated during a game jam back in 2010. In 2014, I began developing a sequel, Super Win the Game. My reference CRT, not the actual TV I had as a kid. 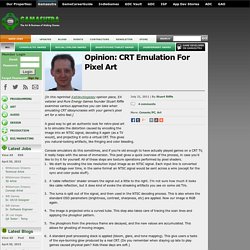 A good way to get an authentic look for retro-pixel art is to simulate the distortion caused by encoding the image into an NTSC signal, decoding it again (as a TV would), and projecting it onto a virtual CRT. This gives you natural-looking artifacts, like fringing and color bleeding. Console emulators do this sometimes, and if you're old enough to have actually played games on a CRT TV, it really helps with the sense of immersion.

This post gives a quick overview of the process, in case you'd like to try it for yourself. All of these steps are texture operations performed by pixel shaders. We start by encoding the low resolution input image as an NTSC signal. Naturally, there are a few problems. Filthy Pants: A Computer Blog: CRT Pixel Shader Filter for SNES Emulation. Are similar to the shader covered in this post, though they run slightly faster and have no visible artifacts. is a simplified rewrite that should be usable on much older, slower machines. 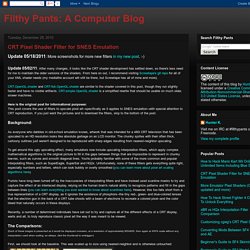 This post covers the use of filters to upscale pixel art--specifically as it applies to SNES emulation--with special attention to CRT reproduction. If you just want the pictures and to download the filters, skip to the bottom of the post. Background: As everyone who dabbles in old-school emulation knows, artwork that was intended for a 480i CRT television that has been upscaled to an HD resolution looks like absolute garbage on an LCD monitor. The chunky sprites with their often thick, cartoony outlines just weren't designed to be reproduced with sharp edges resulting from nearest-neighbor upscaling. The Comparisons: First, we should look at the baseline. (<- Look at that noisy RF signal!) Pixel Shaders vs. InstaCRT — Real World Camera Filter — Martin Ström. A few days ago we finally released InstaCRT — our real world camera filter (previously mentioned here and here). 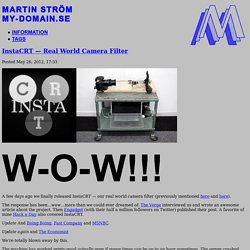 The response has been…wow…more than we could ever dreamed of. The Verge interviewed us and wrote an awesome article about the project. Then Engadget (with their half a million followers on Twitter) published their post. A favorite of mine Hack a Day also covered InstaCRT. Update And Boing Boing, Fast Company and MSNBC. Update again and The Economist We’re totally blown away by this. The machine has worked pretty good actually even if queue times can be up to an hour sometimes.

Today we’re upgrading the hardware but the charm of the project is of course that each and every photo has to wait in line before it gets displayed on the old CRT screen. It’s so fun to a part of this project. To see how it works, look at this video: If you’d like to download it: