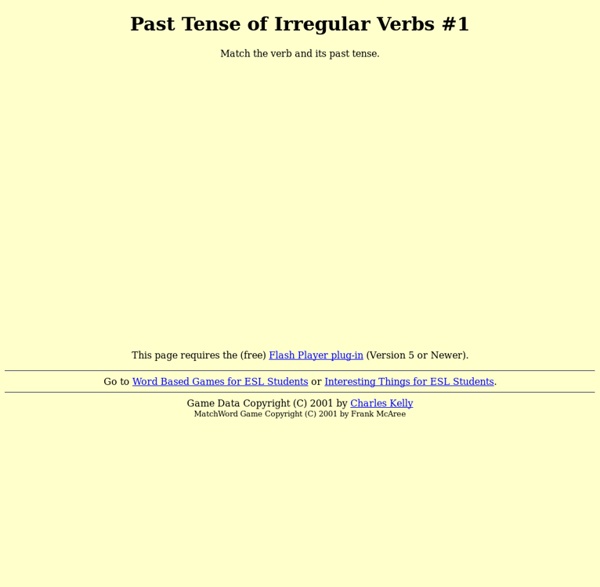 Simple Past - Grammar for Kids (Past Simple of Regular Verbs) (Past Simple of Irregular Verbs) (Regular/Irregular Verbs) Bradley´s Matching Pairs- Irrregular Past Tense After Effects Basic Training Welcome to Basic Training! In this Free Video Training Series, you'll learn everything you need to know to start using After Effects today. This is not an overview of the software, this is a real training series that covers advanced techniques for Motion Tracking, Color Keying and even 3D Title Design. List of Roman deities A vast number of ancient Roman deities are known by name. The most familiar today are those the Romans identified with Greek counterparts (see interpretatio graeca), integrating Greek myths, iconography, and sometimes religious practices into Roman culture, including Latin literature, Roman art, and religious life as it was experienced throughout the Empire. Many of the Romans' own gods remain obscure, known only by name and function, through inscriptions and texts that are often fragmentary—particularly those who belong to the archaic religion of the Romans dating back to the era of kings, the so-called "religion of Numa," perpetuated or revived over the centuries. Some archaic deities have Italic or Etruscan counterparts, as identified both by ancient sources and by modern scholars. Throughout the Empire, the deities of peoples in the provinces were given new theological interpretations in light of functions or attributes they shared with Roman deities.

Past Simple Irregular Verbs ESL, Grammar, Interactive, Activity Online, fun game Practice the Past Simple Tense and Irregular Verbs, using this ESL Grammar Interactive Monkey Fun Game Activity for pre-intermediate (bought, saw, ate, drank, etc). ESL Learners and Teachers can use it to review English vocabulary and grammar or simply practice grammar. This Sentence Monkey activity is great for this type of grammar practice. Irregular verbs are problematic when learning English verbs in the past tenses. With regular verbs, you simply add 'ed' or 'd' to form the past. This activity will give you a head start with everyday commonly-used irregular verbs.

Past Simple Sequencing Activity ESL Interactive Fun Games Here we have the games carefully laid out for you. Follow the links to browse the variety of games offered. The Myth of Persephone - Greek Goddess of the Underworld by Laura Strong, PhD One of the best known characters in the Slavic genre of folklore and fairytales is the deadly guardian of the Underworld, Baba Yaga. Usually found in the deepest darkest corner of the forest, she is commonly portrayed as a hideous old hag with razor sharp teeth who cannibalistically devours those who naively stumble upon her domain. She dwells in a magical hut that is surrounded by a fence made from the leftover bleached-white bones of her victims, which is illuminated by their glowing skulls. This fence is a clear signal to anyone who would dare to pass through its gate that they must be prepared for an initiatory underworld experience, an experience that could end in sudden death or life-altering enlightenment, depending upon the wits and attitude of the initiate. Throughout the Slavic region, the term baba connotes an "old woman," which when combined with the Russian term yaga, for "hag," equals the name of this well-respected elder.

Aztec Civilization The Aztec Empire flourished between c. 1345 and 1521 CE and, at its greatest extent, covered most of northern Mesoamerica. Aztec warriors were able to dominate their neighbouring states and permit rulers such as Motecuhzoma II to impose Aztec ideals and religion across Mexico. Highly accomplished in agriculture and trade, the last of the great Mesoamerican civilizations was also noted for its art and architecture which ranks amongst the finest ever produced on the continent.

Irregular Verbs — Exercise 2 Directions: In the exercise that follows, you will read sentences that contain blanks. These blanks require the appropriate forms of irregular verbs. To keep track of your answers, print the accompanying handout. If you are unsure which choice to make, consult the rules. Otherwise, face the consequences! You are forewarned!

Past Simple Jeopardy Betting TV Game ESL Interactive Fun Games Here we have the games carefully laid out for you. Follow the links to browse the variety of games offered. This is only the directory for interactive games and exercises. Our ESL fun games here include : Snakes and Ladders, Hangman, Spelling games, Wheel of Fortune, TV Games(Betting Game), Mazes, Memory Games, Matching exercises, Sequencing exercises, Picture Quizzes, Catch it and more. Judaism 101 Where to Start There are over eighty web pages on this site, comprising over 300 pages of text, a virtual book of information on Judaism. That's a lot of information! Where should you start?

Aztec Math Decoded, Reveals Woes of Ancient Tax Time April 3, 2008 Today's tax codes are complicated, but the ancient Aztecs likely shared your pain. To measure tracts of taxable land, Aztec mathematicians had to develop their own specialized arithmetic, which has only now been decoded.