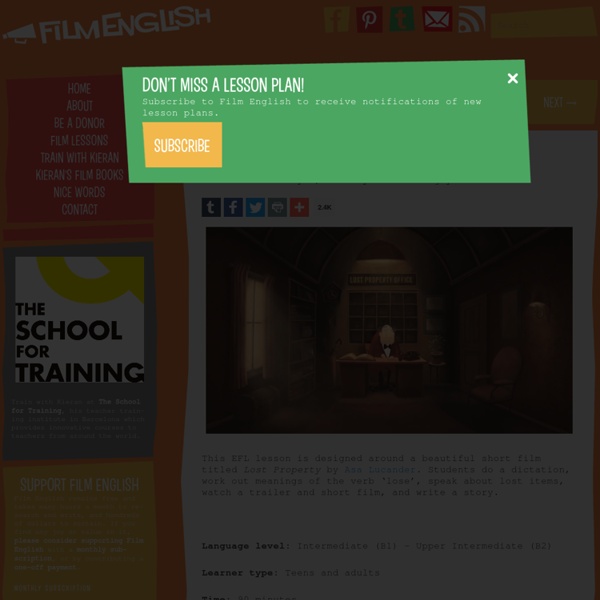 This EFL lesson is designed around a beautiful short film titled Lost Property by Asa Lucander. Students do a dictation, work out meanings of the verb ‘lose’, speak about lost items, watch a trailer and short film, and write a story. Language level: Intermediate (B1) – Upper Intermediate (B2) Learner type: Teens and adults Time: 90 minutes Activity: Dictation, working out meanings of the verb ‘lose’, watching a trailer and short film, speaking and writing a story Topic: Lost property Language: the verb ‘lose’, commonly lost objects and present tenses Materials: Trailer and short film Downloadable materials: lost property lesson instructions The School for Training is a small specialist teacher training institute in Barcelona, providing innovative courses of the highest quality for teachers from around the world. Find out more about the courses and how to enrol here. Overview Step 1 Dictate the following sentences to your students: Step 2 In pairs students check they’ve got the same sentences. Step 3

Human Rights This is the preparation material for an English conversation lesson about human rights. Human rights are rights inherent to all human beings, whatever our nationality, place of residence, sex, national or ethnic origin, colour, religion, language, or any other status. We are all equally entitled to our human rights without discrimination. Universal human rights are often guaranteed by the law of a country, general principles and other sources of international law. International human rights laws give down obligations of Governments to act in certain ways or to refrain from certain acts, in order to promote and protect human rights and freedoms of individuals or groups. Video about Human Rights

The Consultants-E : EdTech Consultancy - WebQuest Repository Victoria Boobyer - A Digital FrankensteinThis webquest is aimed at students of Intermediate [B1] level and above and would supplement any Frankenstein-based project work or reading. Learners research topics based on Mary Shelley, the writing of Frankenstein and Frankenstein in movies. The writing tasks are similar to those found in the Cambridge English First (FCE) exams. It includes student and teacher assessment criteria. [ more... ] Sonja Tack – Africa in 2015: Where will Poverty and Hunger be?In this WebQuest, students read a variety of BBC news articles and consider the benefits and drawbacks of giving aid to African countries.

Best Resources For Teaching About Rosa Parks & 60th Anniversary Of The Montgomery Bus Boycott Thanks to Teaching Tolerance, I just learned that December 4th will be the 60th anniversary of the Montgomery Bus Boycott. I’m sure there will be lot of new resources becoming available in the next few weeks, and I’m also sure that there are plenty that I’m not including in the first edition of this post. Please let me know what I’m missing. How can film help you teach or learn English? What can film and video add to the learning experience? Kieran Donaghy, who won the British Council’s TeachingEnglish blog award tells us why film is such a good resource and recommends some useful websites, in one of our top five articles of all time, illustrated by artist Jamie Johnson. Language teachers have been using films in their classes for decades, and there are a number of reasons why film is an excellent teaching and learning tool.

The Seven Best Silent Short Films for Language Teaching - Kieran Donaghy As many short films are artistic, they have limited appeal in the commercial marketplace and are funded from diverse sources. To make them easier to sell worldwide, they often contain little or no dialogue, which makes comprehension much easier. As a result, they offer intensely ‘filmic’ experiences, using images and movement, sequence and duration, sound and music to tell their stories. Describing photos (comparing, contrasting and speculating) You are going to practise language for; Describing photosComparing and contrasting photos (discussing similarities and differences)Speculating on what might be happeningReacting to photos (giving opinions) Discuss Look at the presentation.

The Seven Best Short Animated Films for the Language Classroom - Kieran Donaghy Animated films are ones in which individual drawings, paintings, or illustrations are photographed frame by frame. Traditionally animated films have been associated with children, however, nowadays they are designed to appeal to everyone. With the increased ease of creating animations, there has been a huge rise in the number of animated films being produced, and the vast majority of these are short animations. Many of these short animated films can be exploited in the language classroom as they are short enough to be used in a single session, offer a complete narrative in a short space of time, have a unique capacity of grabbing and holding students’ attention, and deal with contemporary subjects and issues, such as bullying, racism, sexism, homelessness, and human rights, which are relevant to students’ lives. Here are my seven favourite animated short films for the language classroom.

All of Me by John Legend In this song John Legend uses opposite meanings to convey how he feels about his wife. It is a very ‘honest’ love song. I think it reflects real life rather than a fairytale version of a relationship. This provides a good opportunity for students to discuss love songs, identify the opposite meanings and then interpret what the songwriter really means. Students then use what they have learned to talk about their own loved ones. Materials: PowerPoint slides here , song on YouTube, slide 6 printed off and cut up 1/group , worksheet without explanations 1/pair here and worksheet with explanation 1/pair and cut up here.

The Best Posts On The “Flipped Classroom” Idea Check out my two-part Education Week Teacher series on the flipped classroom here I’m a bit wary/skeptical about whole “Flipped Classroom” idea and how it works in practice. Diana Laufenberg spoke for me, also, in some of her tweets about the concept: But I’m still open to learning, and I invite your suggestions for additions to list. Three Good Tools for Building Flipped Lessons That Include Assessment Tools In the right setting the flipped classroom model can work well for some teachers and students. I recently received an email from a reader who was looking for a recommendation for a tool would enable her to add an assessment aspect to her flipped lesson. Here are some tools that can accomplish that goal. eduCanon is a free service for creating, assigning, and tracking your students' progress on flipped lessons. eduCanon allows teachers to build flipped lessons using YouTube and Vimeo videos, create questions about the videos, then assign lessons to their students. Teachers can track the progress of their students within eduCanon.