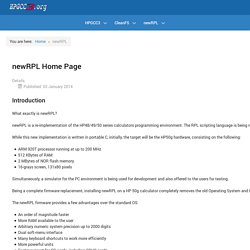 NewRPL is a re-implementation of the HP48/49/50 series calculators programming environment. The RPL scripting language is being redesigned and recreated with even more powerful features. While this new implementation is written in portable C, initially, the target will be the HP50g hardware, consisting on the following: ARM 920T processor running at up to 200 MHz 512 KBytes of RAM 2 MBytes of NOR flash memory. 16-grays screen, 131x80 pixels Simultaneously, a simulator for the PC environment is being used for development and also offered to the users for testing. Being a complete firmware replacement, installing newRPL on a HP 50g calculator completely removes the old Operating System and transforms the calculator into a newRPL device.

The newRPL firmware provides a few advantages over the standard OS: Status The firmware image can be downloaded from the Downloads page. Xowiki. Announcement: Next Scripting Framework 2.0.0 available January 01, 2015 We are pleased to announce the release of the NSF/NX/XOTcl 2.0.0 (Download ). 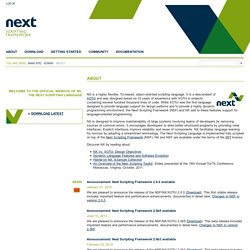 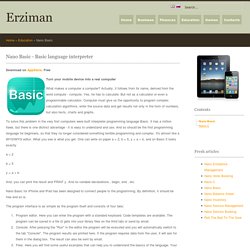 Free Turn your mobile device into a real computer What makes a computer a computer? Actually, it follows from its name, derived from the word compute - compute. Yes, he has to calculate. To solve this problem in the very first computers were built interpreter programming language Basic. Flow-Based Programming for JavaScript. 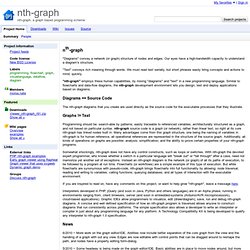 Our eyes have a high-bandwidth capacity to understand a diagram's structure. "Text" conveys rich meaning through words. We must read text serially, but short phrases easily bring concepts and actions to mind, quickly. Software for PocketPC. Free Development software downloads. NASM Develop IDE (The Open Source NASM Development Environment For Windows) Nasal. The Nice programming language. Nickle. nScript. [fakehalo(=netscript.sourceforge.net)]; netscript. Noop - A new object-oriented programming language focusing on maintainability. Noop (pronounced noh-awp, like the machine instruction) is a new language experiment that attempts to blend the best lessons of languages old and new, while syntactically encouraging what we believe to be good coding practices and discouraging the worst offenses. 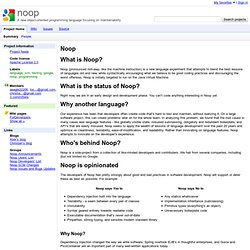 Noop is initially targeted to run on the Java Virtual Machine. Right now, we are in an early design and development phase. You can't code anything interesting in Noop yet. Our experience has been that developers often create code that's hard to test and maintain, without realizing it. On a large software project, this can create problems later on for the whole team. Newspeak » The Newspeak Programming Language. Napier88 - SystemsResearch. From SystemsResearch. 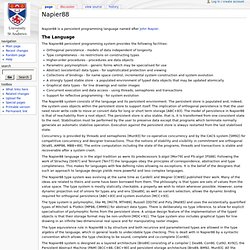 NESL: A Parallel Programming Language. Nlang-code-interpriter - Nlang code interpreter. The program interprets the code of the programming language (NLang), which I invented myself. 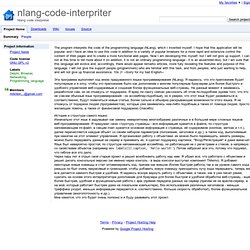 I hope that this application will be popular, and I have an idea to use this code in addition to a variety of popular browsers for a more rapid and extensive control the content of Web pages and to create a more functional web pages. Now I am developing this myself, but I will not give up support. I can not at this time to tell more about it (In addition, it is not an ordinary programming language - it is an assembler-like), but I am sure that this language will evolve and, accordingly, there would appear remarks articles, more fully revealing the features and purpose of this language. I will not give the support people (programmers) who are familiar with this task, and from peoples, who just wanting to help, and will not give up financial assistance. 10s (= --Sorry for my bad English-- Free Science & Engineering software downloads. Nrdo (NetReach Database Objects) Nu. Nit. The Nx Programming Language. 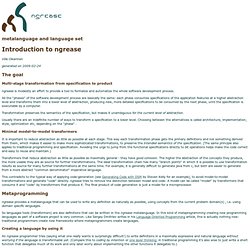 All the "phases" of the software development process are basically the same: each phase consumes specifications of the application features at a higher abstraction level and transforms them into a lower level of abstraction, producing new, more detailed specifications to be consumed by the next phase, until the specification is executable by a computer. Transformation preserves the semantics of the specification, but makes it unambiguous for the current level of abstraction. NPL : a graphical programming language for motor control and its application to bipedal walking. NewLISP - Home. Intro to NPL. Introduction The Niakwa Programming Language (NPL) is a robust, powerful computer language designed for developers who need to quickly deploy mission-critical applications. 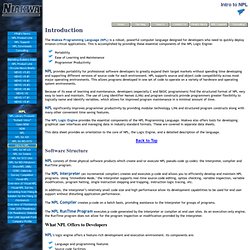 This is accomplished by providing these essential components of the NPL Logic Engine: PortabilityEase of Learning and Maintenance Programmer Productivity NPL provides portability for professional software developers to greatly expand their target markets without spending time developing and supporting different versions of source code for each environment. NPL supports source and object code compatibility across most major operating environments. Because of its ease of learning and maintenance, developers (especially C and BASIC programmers) find the structured format of NPL very easy to learn and maintain.