Sky Greens - Technology. Green urban technologies are used on the farm, which is easy and environmentally friendly to operate and maintain. 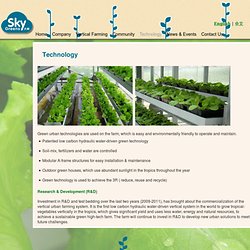 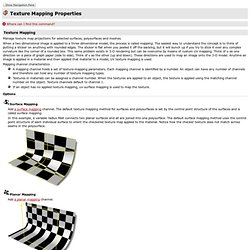 When a two dimensional image is applied to a three dimensional model, the process is called mapping. Archtoolbox. FlyingArchitecture — free 3D models, materials, textures and tutorials for Rhinoceros, 3DS Max, C4D and all other programs. The Infinite in Between (fractal animation) PennDesignShowcase. Researchers rewrite an entire genome — and add a healthy twist. Scientists from Yale and Harvard have recoded the entire genome of an organism and improved a bacterium’s ability to resist viruses, a dramatic demonstration of the potential of rewriting an organism’s genetic code. 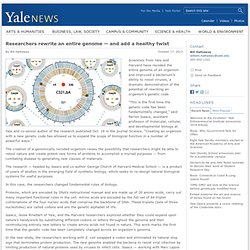 “This is the first time the genetic code has been fundamentally changed,” said Farren Isaacs, assistant professor of molecular, cellular, and developmental biology at Yale and co-senior author of the research published Oct. 18 in the journal Science. “Creating an organism with a new genetic code has allowed us to expand the scope of biological function in a number of powerful ways.” Sonic Acts 2013. How to Export Rhino 3D to Maya. Photos du journal - Neuroscience Research Techniques. ACADIA. INTRODUCTION: CONVERGENCE OF BIOPHYSICS, MORPHOGENESIS AND TISSUE ARCHITECTURE Construction of soft “skin” at the architectural scale is challenging due to structural instability inherent to soft materials. 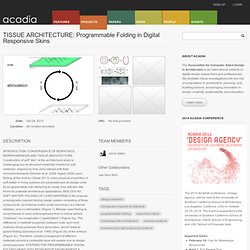 Inspired by how cells interact with their microenvironments (Discher et al. 2009; Ingber 2006) upon folding of the embryo (Sasai 2013), basic physical properties of soft matter in living systems are parameterized as design units for programmable manufacturing to create new soft skin-like forms for potential architectural applications. BIOLOGY AS SOFT MATTER: FOLDING OF LIVING MATERIALS We propose a biologically inspired folding design system consisting of three components: (a) external matrix (outer and inner); (b) internal skeleton; and (c) stimulation (Figure 1). Biology uses folding to sculpt tissues in early embryogenesis from a hollow sphere (“blastula”) via invagination (“gastrulation”) (Figure 2a). Apple - Making the all-new Mac Pro. A Dutch Guy Is Disgusted By America, But He Has A Hell Of A Point.

Narrator: Cycling in the U.S. is very different from the Netherlands. 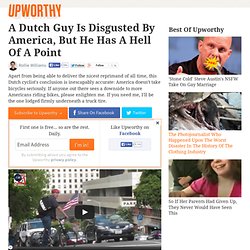 Not only the way people dress and behave, the type of bikes, but also the traffic in which they have to move around, the cause of all these differences. It takes courage to ride between motorized traffic like this. And you cannot trust drivers to play by the rules. Software. Fig 1 shows an example of the EmbedITApp where a servo module and four sensor modules (infrared, light, accelerometer, gyroscope) are listed. Each physically available module is represented as a module button showing its ID, module type and icon (upper left column of the application).

A New Programming Language That Can Shape Our DNA. Scientists have studied the behavior of complex biological molecules such as DNA for decades. 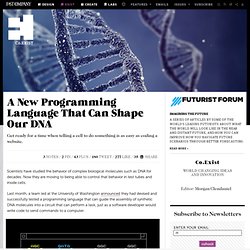 Now they are moving to being able to control that behavior in test tubes and inside cells. Last month, a team led at the University of Washington announced they had devised and successfully tested a programming language that can guide the assembly of synthetic DNA molecules into a circuit that can perform a task, just as a software developer would write code to send commands to a computer. Photos du journal - Neuroscience Research Techniques. Unconventional Computing: Design Methods for Adaptive Architecture: Rachel Armstrong, Simone Ferracina: 9781926724249: Amazon.com. 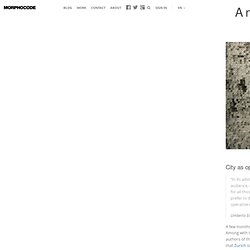 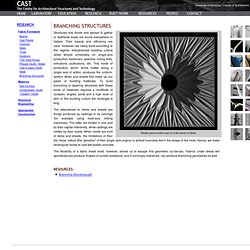 Structures that divide and spread to gather or distribute loads are found everywhere in Nature. Their beauty and efficiency are clear. However, we rarely build according to this regime. Industrialized building culture relies almost universally on single-axis production machinery: sawmills, rolling mills, extrusions, pultrusions, etc. This mode of production, which forms matter along a single axis of action, produces the uniform-section sticks and sheets that make up our pallet of building materials.

About: GDELT: Global Database of Events, Language, and Tone. What is GDELT? 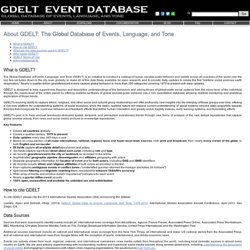 The Global Database of Events, Language, and Tone (GDELT) is an initiative to construct a catalog of human societal-scale behavior and beliefs across all countries of the world over the last two centuries down to the city level globally, to make all of this data freely available for open research, and to provide daily updates to create the first "realtime social sciences earth observatory. " Nearly a quarter-billion georeferenced events capture global behavior in more than 300 categories covering 1979 to present with daily updates. Competition. Honorable Mention 2014 Skyscraper Competition Henry Smith, Adam Woodward, Paul Attkins United Kingdom A cylindrical matrix of super tall structure centered on an electromagnetic vertical accelerator to eliminate the hydrocarbon dependency of aircraft during takeoff. 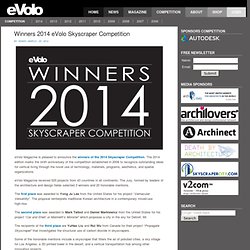 The radical re-interpretation of the skyscraper format provides hyper density in an organic and adaptive habitat. 3D Dreaming: Architecture From a Digital Point of View. Database of Digital Art. Unfolding the Tesseract. The Future of Being Human. Architecture and Urbanism MArch (DRL) – AA School. IPCC - Intergovernmental Panel on Climate Change.

Interactive: Snake Oil? The scientific evidence for health supplements. See the data: bit.ly/snakeoilsupps. See the static versionSee the old flash version Check the evidence for so-called Superfoods visualized. Note: You might see multiple bubbles for certain supplements. These is because some supps affect a range of conditions, but the evidence quality varies from condition to condition.

For example, there’s strong evidence that garlic can lower blood pressure. MoI, 3D modeling for designers and artists. IEEE - Photos du journal. Chinese doctor grows new nose on man’s forehead. Originally published September 28, 2013 at 3:10 PM | Page modified September 28, 2013 at 4:07 PM BEIJING — A surgeon in China says he has built an extra nose out of a man’s rib cartilage and implanted it under the skin of his forehead to prepare for a transplant in what may be the first operation of its kind. Surgeon Guo Zhihui at Fujian Medical University Union Hospital in China’s southeastern province of Fujian spent nine months cultivating the graft for a 22-year-old man whose nose was damaged. The striking images of the implant — with the nostril section facing diagonally upward on the left side of the man’s forehead — drew widespread publicity after they began to circulate in Chinese media.

IEEE - Photos du journal. Introducing the Shapeoko 2. Forget It, This Toddler Just Won Halloween. Switzerland's NEST High Rise is a Modular Test Bed for the Future of Green Building Technology. NEST is a collective research project by the ETH Domain that is supported by Empa, Eawag, ZJA Zwarts & Jansma Architects, Supermanoeuvre ETH Zurich, and EPF Lausanne. The project consists of a central backbone and a basic grid that can accommodate about 50 living and office modules that can be periodically changed out. The multi-story project will be built out of lightweight and efficient materials to reduce resource consumption while maximizing building potential and strength. The plug and play capabilities will allow novel materials, new components and innovative systems to be tested out under real-world conditions.

Researchers can analyze the systems while tweaking settings to improve efficiency and then build brand new modules when systems are optimized. The building will also have the ability to support renewable energy systems to generate power for the project and validate efficiencies. African Safari Experts. Magazine What is this all about.

Skills4Study.com: Student life. OSC Application Areas. Getting Started - OpenGL. So you want to take advantage of the power of the OpenGL API? If you are visiting this page because a game or software uses the OpenGL API, you need to install the appropriate graphic driver which enables usage of the functionality provided. To program using the OpenGL API, you need the driver and the development package (depends on platform and programming language). More platform-specific details are described in the sections below. Anish Kapoor and Arata Isozaki Unveil the World’s First Inflatable Concert Hall.