Recovering forests 'heal' themselves by speeding up nitrogen fixation. Nitrogen is colorless, odorless and tasteless, but all life on earth depends on it. 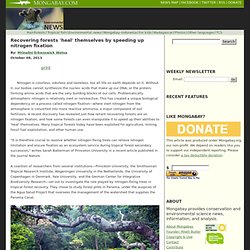 Without it, our bodies cannot synthesize the nucleic acids that make up our DNA, or the protein-forming amino acids that are the very building blocks of our cells. Problematically, atmospheric nitrogen is relatively inert or nonreactive. This has created a unique biological dependency on a process called nitrogen fixation—where inert nitrogen from the atmosphere is converted into more reactive ammonia, a major component of soil fertilizers. A recent discovery has revealed just how reliant recovering forests are on nitrogen fixation, and how some forests can even manipulate it to speed up their abilities to 'heal' themselves. Many tropical forests today have been exploited for agriculture, mining, fossil fuel exploitation, and other human use. Tropical forests in Panama contain nitrogen fixing tree species that can adjust their fixation rates to provide the nitrogen fertilizer they need to grow.

Global Nitrogen: Cycling out of Control. Maryland agrees to cut smog 10 other states also approve plan. March 11, 1992|By Timothy B. 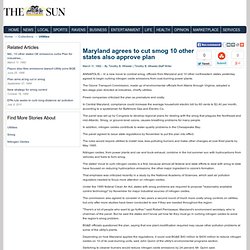 Wheeler | Timothy B. Wheeler,Staff Writer ANNAPOLIS -- In a new move to combat smog, officials from Maryland and 10 other northeastern states yesterday agreed to begin curbing nitrogen oxide emissions from coal-burning power plants. The Ozone Transport Commission, made up of environmental officials from Maine through Virginia, adopted a two-stage plan directed at industries, chiefly utilities. Power companies criticized the plan as premature and costly. In Central Maryland, compliance could increase the average household electric bill by 60 cents to $2.40 per month, according to a spokesman for Baltimore Gas and Electric Co. Study examines nitrogen, copper levels in Chesapeake Bay watershed. A comprehensive study of pollutants in a major Chesapeake Bay tributary revealed troublesome levels of nitrogen and copper that could flow into the Bay, according to U.S. 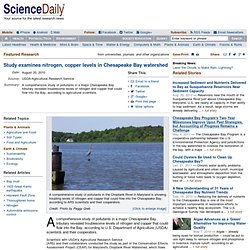 Department of Agriculture (USDA) scientists and their cooperators. Scientists with USDA's Agricultural Research Service (ARS) and their collaborators conducted the study as part of the Conservation Effects Assessment Project (CEAP) for Maryland's Choptank River Watershed, which flows into the Chesapeake Bay. CEAP began in 2004 and focuses on the effects of conservation practices and Farm Bill conservation programs on 37 watersheds nationwide. Greg McCarty, a soil scientist with the ARS Hydrology and Remote Sensing Laboratory at Beltsville, Md., and Laura McConnell, a chemist at the ARS Environmental Management and Byproducts Utilization Laboratory in Beltsville, lead the team's CEAP Choptank project. 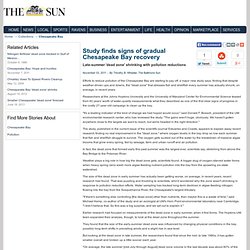 How We Save the Bay/The Issues/Dead Zones/Nitrogen & Phosphorus - Chesapeake Bay Foundation. The Chesapeake Clean Water Blueprint outlines the maximum amount of nitrogen, phosphorus, and sediment each state in the Chesapeake Bay watershed can release into the Bay and still get our estuary off the "dirty waters" list. 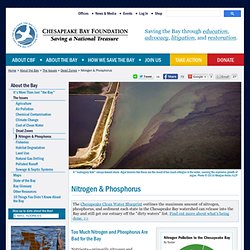 Find out more about what's being done. >> Intercropping with nitrogen-fixing crops leads to increased maize yields, says study. Growing maize crops alongside legume trees has been shown to naturally fertilize fields and increase crop yields in many parts of sub-Saharan Africa. 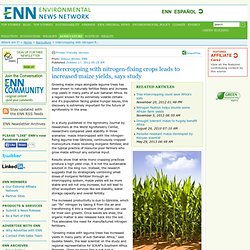 As a region known for its extremely volatile climate and it's population facing global hunger issues, this discovery is extremely important for the future of agroforestry in the area. In a study published in the Agronomy Journal by researchers at the World Agroforestry Center, researchers compared yield stability in three scenarios: maize intercropped with the nitrogen-fixing legume tree Gliricidia, continuously cropped monoculture maize receiving inorganic fertilizer, and the typical practice of resource-poor farmers who grow maize without any external input. Results show that while mono cropping practices produce a high yield crop, it is not the sustainable solution in the long run. Read more at EurekAlert. Decline in Salt Marshes in US Caused by Increased Nutrient Levels. Salt Marshes are marshy areas found near estuaries and low-energy coastlines. 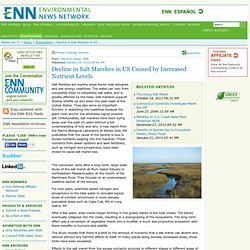 The water can vary from completely fresh to completely salt water, and is greatly affected by the tides. Salt marshes support diverse wildlife up and down the east coast of the United States. 2012 Gulf of Mexico Dead Zone. 0ead zones are hypoxic (low-oxygen) areas in the world's oceans, the observed incidences of which have been increasing since oceanographers began noting them in the 1970s. 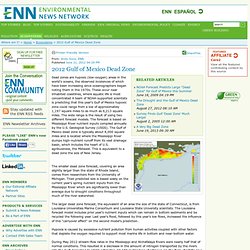 These occur near inhabited coastlines, where aquatic life is most concentrated A team of NOAA-supported scientists is predicting that this year's Gulf of Mexico hypoxic zone could range from a low of approximately 1,197 square miles to as much as 6,213 square miles. The wide range is the result of using two different forecast models. The forecast is based on Mississippi River nutrient inputs compiled annually by the U.S. Geological Survey (USGS). The Gulf of Mexico dead zone is typically about 8,000 square miles and is located where the Mississippi River dumps high-nutrient runoff from its vast drainage basin, which includes the heart of U.S. agribusiness, the Midwest.

During May 2012 stream-flow rates in the Mississippi and Atchafalaya Rivers were nearly half that of normal conditions. A new understanding of 31 years of Chesapeake Bay nutrient trends. Reducing the delivery of nutrients to the Chesapeake Bay is one of the most important components of restoration efforts to achieve a healthy Bay ecosystem. 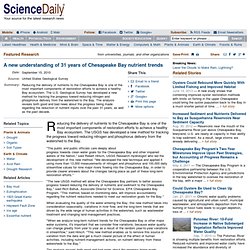 The USGS has developed a new method for tracking the progress toward reducing nitrogen and phosphorus delivery from the watershed to the Bay. Fertilizers: A Growing Threat To Sea Life. A rise in carbon emissions is not the only threat to the planet. 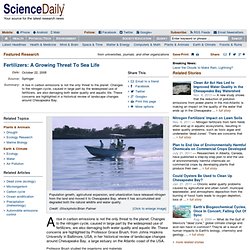