DOPE Bird 4 Personality Types Test (Printable & Online Version) The DOPE bird personality test is one of those “don’t have to have a psychologist,” fun, and useful tools that I’ve permanently added to my personal development toolbox. 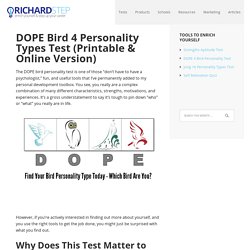 You see, you really are a complex combination of many different characteristics, strengths, motivations, and experiences. It’s a gross understatement to say it’s tough to pin down “who” or “what” you really are in life. However, if you’re actively interested in finding out more about yourself, and you use the right tools to get the job done, you might just be surprised with what you find out. Why Does This Test Matter to Me? If you’ve never had tens of thousands of people to survey, question, and test about their personalities and innermost being, you’d really only have a set of assumptions to work with. I’m saying it’s a *tool* the mind uses to help you better understand the people you work with. I’m adding some emotion here because it’s a big deal. Schizoid Personality Disorder Test. How does the schizoid personality disorder test work? 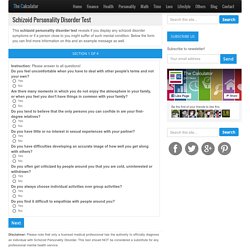 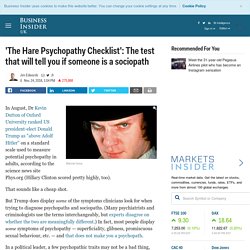 In August, Dr Kevin Dutton of Oxford University ranked US president-elect Donald Trump as "above Adolf Hitler" on a standard scale used to measure potential psychopathy in adults, according to the science news site Phys.org (Hillary Clinton scored pretty highly, too). That sounds like a cheap shot. But Trump does display some of the symptoms clinicians look for when trying to diagnose psychopaths and sociopaths. (Many psychiatrists and criminologists use the terms interchangeably, but experts disagree on whether the two are meaningfully different.) In fact, most people display some symptoms of psychopathy — superficiality, glibness, promiscuous sexual behaviour, etc. — and that does not make you a psychopath.

In a political leader, a few psychopathic traits may not be a bad thing, such as fearlessness, dominant behaviour, and immunity to stress. The standard screening test for potential psychopaths is the Hare Psychopathy Checklist. 1. United Artists. This Picture Storytelling Test Will Determine Your Personality! This Color Blot Test Can Determine If You're An Idealist Or Realist. Personality test based on C. Jung and I. Briggs Myers type theory. Your Personality Type Can Only Be 1 Of The Colors In The Quiz Below. Which One Are You? Image via – playbuzz.com Do you envision yourself as an idealist, a realist, an introvert, or an extrovert? 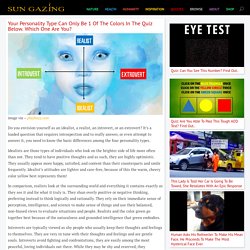 It’s a loaded question that requires introspection and to really answer, or even attempt to answer it, you need to know the basic differences among the four personality types. Idealists are those types of individuals who look on the brighter side of life more often than not. They tend to have positive thoughts and as such, they are highly optimistic. They usually appear more happy, satisfied, and content than their counterparts and smile frequently. In comparison, realists look at the surrounding world and everything it contains exactly as they see it and for what it truly is. Introverts are typically viewed as shy people who usually keep their thoughts and feelings to themselves. Client outcomes. Narcissistic Personality Disorder (NPD) Narcissistic Personality Disorder (NPD) Introduction Narcissistic Personality Disorder is a serious condition which affects an estimated 1% of the population. 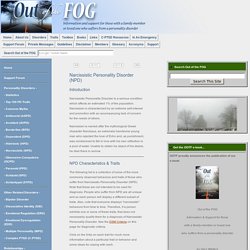 Narcissism is characterized by an extreme self-interest and promotion with an accompanying lack of concern for the needs of others. Narcissism is named after the mythological Greek character Narcissus, an extremely handsome young man who rejected the love of Echo and, as punishment, was condemned to fall in love with his own reflection in a pool of water. Unable to obtain he object of his desire, he died there in sorrow.

NPD Characteristics & Traits The following list is a collection of some of the more commonly observed behaviors and traits of those who suffer from Narcissistic Personality Disorder (NPD). Click on the links on each trait for much more information about a particular trait or behavior and some ideas for coping with each. Alienation - The act of cutting off or interfering with an individual's relationships with others. Personality Disorder Test. Quick mind test – are you normal? Are You Right-Brained Or Left-Brained? IQ Test (Intelligence Test). More than 50 Intelligence Tests for all ages. Have you ever asked yourself, what it intelligence? 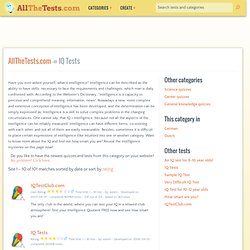 Intelligence can be described as the ability to have skills, necessary to face the requirements and challenges, which man is daily confronted with. According to the Webster’s Dictionary, “intelligence is a capacity to perceive and comprehend meaning, information, news”. Nowadays a new, more complex and extensive conception of intelligence has been developed, and the determination can be simply expressed as: Intelligence is a skill to solve complex problems in the changing circumstances. One cannot say, that IQ = Intelligence, because not all the aspects of the intelligence can be reliably measured. What's Your Learning Style? Avoidant Personality Disorder Test.