A Canopy of Colorful Umbrellas Spotted in Portugal 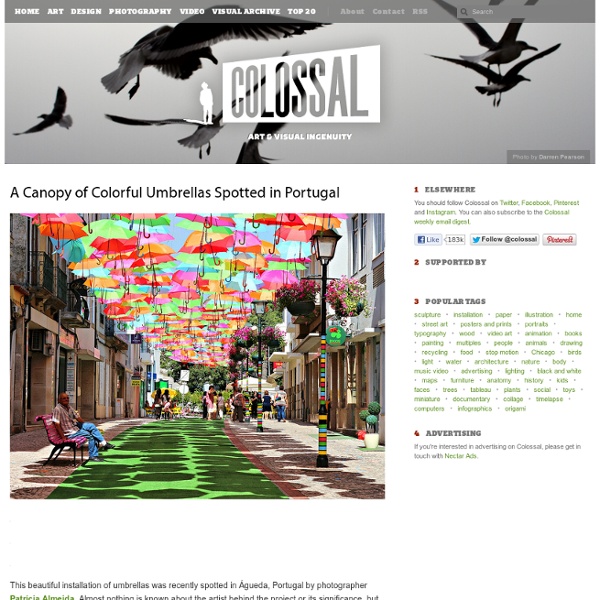 This beautiful installation of umbrellas was recently spotted in Águeda, Portugal by photographer Patrícia Almeida. Almost nothing is known about the artist behind the project or its significance, but it’s impossible to deny the joy caused by taking a stroll in the shadowy rainbow created by hundreds of parasols suspended over this public walkway. It reminds be of Garth Britzman’s bottle carport. (via my modern met)

Richard Hambleton: The Godfather of Street Art Before Banksy and Blek le Rat, in a heady era of 80s street art, a new counterculture hit New York City. Their brand of guerrilla art heralded social activism through street culture. The East Village art movement was spurred on by a new version of creative mass media, using concrete as their blank canvas. Whilst its better-known members, such Keith Haring and Jean-Michel Basquiat, have become art icons, a new London exhibition shows the complete works of Richard Hambleton, the last surviving member of the gang. Hambleton imposed his artistic ideology throughout New York's streets using the urban landscape to showcase his ideals. Witnessing first-hand the drugs and discord of falling into a high-profile, the incognito artist decidedly slipped below the radar. Richard Hambleton: The Godfather of Street Art, The Dairy, 7 Wakefield Street, London WC1N 1PG, until December 3, 2010

Graffiti: Colorful Influences from the Past & Illusion For years, graffitist Txemy studied and admired the work of Van Gogh, Polock, and Basquiat. At present, he has own art style that is characteristic for its bright colors and zigzag lines. Photos © Txemy Link via Street Utopia Street Graffiti Art by Mobstr via Mobstr - Part II ‘Painting on walls cancelled for the Olympic period, Police Police Police Police‘. An Interview with Hanksy Hanksy is a street artist who puts Tom Hanks’ face on copies of Banksy’s art. His first show, which just closed at the Krause Gallery on the Lower East Side, and where the menu offered boxes of chocolates and Dr. Pepper, nearly sold out completely, according to the dealer. “I think what made it such a success is the genuine honesty in it,” gallery owner Ben Krause told me. “Hanksy really is a huge Tom Hanks fan and a huge Banksy fan.” Images of Hanksy’s pieces, pasted and sprayed over walls in both New York and Chicago, gained momentum over corners of the internet, not just those dedicated to documenting the pursuits of street artists and taggers alike, but also fans of a really great, really simple joke. EA: How are you known and what are you known for? Hanksy: The internet and the general public know me as Hanksy. EA: When did you do your first Hanksy piece? Hanksy: Last April, a little over ten months ago. EA: Was that your first piece of street art, or graffiti? Hanksy: Not really.