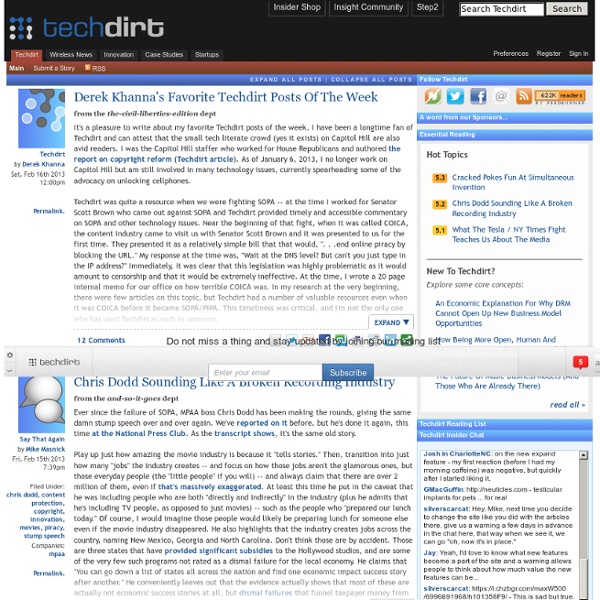 So, we already highlighted the key information revealed and the newly unredacted version of the court's ruling in the Rehinah Ibrahim "no fly list" case (namely: that the US has a "secret exception" by which it can put people into the terrorist screening database despite no "reasonable suspicion" that they're a threat). However, seeing as we had noted some of the bizarre redactions in the original, and now that we have the unredacted version, I figured we could look at some of the more bizarre redactions now that they've been revealed. Let's start with what might have been the most hilarious redaction from the original If you can't read it, it's: Given the Kafkaesque [REDACTED] treatment imposed on Dr. Ibrahim, the government is further ordered expressly to tell Dr.

Deep Solar Minimum + Play Audio | + Download Audio | + Join mailing list April 1, 2009: The sunspot cycle is behaving a little like the stock market. Just when you think it has hit bottom, it goes even lower. Consumer Reports WebWatch: The leader in investigative reporting on credibility and trust online Consumer Reports Web Watch was, until 2009, the Internet integrity division of Consumer Reports. The project was funded by grants from the Pew Charitable Trusts, the John S. and James L. Knight Foundation, and the Open Society Institute. We assisted Consumer Reports’ editorial division in evaluating the credibility of Web sites, we investigated Web sites on behalf of consumers, and we advocated for consumer-focused Internet policy and governance. While ConsumerWebWatch.org is no longer a stand alone website, the work is still being done. Consumer Reports has incorporated the webwatch research role into its regular reports published on ConsumerReports.org.

Top Sites That Make Science Awesome posted by Elizabeth Harper on April 24, 2013 in Internet & Networking, Computers and Software, Family and Parenting, Kids, Guides & Reviews, Fab Websites :: 0 comments Though you may remember science class as dull, much has changed. The Internet has done the impossible and made science a lot more accessible, bringing scientists and science enthusiasts together to share and discuss the most interesting discoveries of the day. Have You Been Writing Your Own Poetry? - Download Our Author's Guide At FriesenPress, we respect your privacy. Any and all personal information that we collect is strictly used for the purposes of conducting business with you. Under no circumstances will we ever sell or rent your personal information to any third parties. What information do you typically collect? From time to time we require some personal information from you, such as your email address, phone number, contact information, payment information, and such in order to communicate with you, receive orders and payment from you, and deliver books or other materials that you have requested from us. Where am I usually required to leave personal information?

August 26, 2014: Do we live in a 2-D hologram? Press Release August 26, 2014 Do we live in a 2-D hologram? New Fermilab experiment will test the nature of the universe Start Page - The Faculty of Science, University of Gothenburg, Sweden The Faculty of Science The Faculty of Science includes all the major subject areas in the fields of mathematics and natural sciences. With 6 500 students and 730 employees it is the second largest Faculty at the University of Gothenburg. Sulfur Haunts the Ghost Wreck [March 4, 2014] Sulfur and iron accumulation has once again been found in wood samples from old shipwrecks in the Baltic Sea.

Foundational Questions Institute The Foundational Questions Institute (FQXi) To catalyze, support, and disseminate research on questions at the foundations of physics and cosmology, particularly new frontiers and innovative ideas integral to a deep understanding of reality but unlikely to be supported by conventional funding sources. FQXi has five goals: {*style:<ul style="padding-left:20px;"><li> Science for celebrities In January 2007, exasperated by the tide of influential and misleading claims made by celebrities in the public sphere, we worked with scientists to produce Making Sense of Science for Celebrities. Each year since, Sense About Science has reviewed the odd science claims people in the public eye have made - about diets, cancer, magnets, radiation and more - sent in to us by scientists and members of the public. Many of these claims promote theories, therapies and campaigns that make no scientific sense. We ask scientists to respond, to help the celebrities realise where they are going wrong and to help the public to make sense of celebrity claims. “We seem to be seeing a celebrity divide on science.

Physical Review X Does Research on Foundations of Quantum Mechanics Fit into PRX’s Scope? October 24, 2014 The editors and Bill Poirier from Texas Tech University spotlight an original, thought-provoking paper by Hall, Deckert, and Wiseman on foundations of quantum mechanics, Phys. Rev. What is this thing called science? As a scientist, Evelyn Fox Keller hated experiments. Today a professor emerita in the History of Science at MIT, she started out her scientific career in theoretical physics before jumping to molecular biology. What got her was the trivial volatility inherent in experimentation. “Someone could brush by the thermostat on the water bath, and a months’ work would be down the drain. You didn’t have control over it.” The methods of theoretical physics better suited her.

Weird things start to happen when you stare into someone's eyes for 10 minutes Giovanni Caputo recruited 20 young adults (15 women) to form pairs. Each pair sat in chairs opposite each other, one metre apart, in a large, dimly lit room. Specifically, the lighting level was 0.8 lx, which Caputo says "allowed detailed perception of the fine face traits but attenuated colour perception."