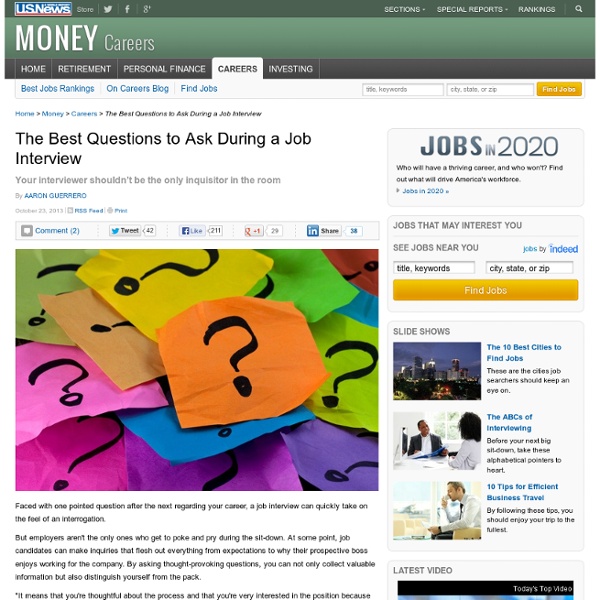 Faced with one pointed question after the next regarding your career, a job interview can quickly take on the feel of an interrogation. But employers aren't the only ones who get to poke and pry during the sit-down. At some point, job candidates can make inquiries that flesh out everything from expectations to why their prospective boss enjoys working for the company. By asking thought-provoking questions, you can not only collect valuable information but also distinguish yourself from the pack. "It means that you're thoughtful about the process and that you're very interested in the position because you took the time to think of questions that would be substantive," says Cheryl Palmer, a career coach and founder of the career coaching firm Call to Career. Here are some questions you can ask and tips for interpreting the responses from your interviewer. 1. [Read: 9 Things to Put on Your Job Interview Checklist.] 2. 3. [See: The ABCs of Interviewing.] 4. 5.

If You Want To Be Rich, Don't Get An MBA What Makes a Leader? It was Daniel Goleman who first brought the term “emotional intelligence” to a wide audience with his 1995 book of that name, and it was Goleman who first applied the concept to business with his 1998 HBR article, reprinted here. In his research at nearly 200 large, global companies, Goleman found that while the qualities traditionally associated with leadership—such as intelligence, toughness, determination, and vision—are required for success, they are insufficient. Truly effective leaders are also distinguished by a high degree of emotional intelligence, which includes self-awareness, self-regulation, motivation, empathy, and social skill. These qualities may sound “soft” and unbusinesslike, but Goleman found direct ties between emotional intelligence and measurable business results. Every businessperson knows a story about a highly intelligent, highly skilled executive who was promoted into a leadership position only to fail at the job. Evaluating Emotional Intelligence

The Science of Sensory Marketing For two decades marketers in a variety of industries have been building expertise in reaching consumers through the five senses—learning to deploy cues, such as the sting from a swig of mouthwash and the scritch-scratch sound of a Sharpie pen, that can intensify perceptions of brands. The past year has brought a rush of interest in the subject among academics. New research suggests that we’re about to enter an era in which many more consumer products companies will take advantage of sense-based marketing. Much of the new research centers on “embodied cognition”—the idea that without our conscious awareness, our bodily sensations help determine the decisions we make. For example, people who had briefly held a warm beverage were more likely than people who had held a cold one to think that a stranger was friendly; this was demonstrated in an experiment by Lawrence E. Williams, of the University of Colorado at Boulder, and John A.

uk.businessinsider You’re busy, so I’ll keep this quick. Following are the simplest tips I can give you to easily — and forever — improve the quality of your writing. Delete the word “that.” At least 90% of the times you use the word “that” can be removed from your writing and it will instantly make your sentence stronger. Example: “You believe that I’m lying, but I’m not.” becomes “You believe I’m lying, but I’m not.” Delete the words “I think.” It adds nothing. Example: “I think this is a good sentence.” becomes “This is a good sentence.” Avoid words that end in “-ing.” In most cases, the “-ing” softens your word and adds no value. Example: “The experiences we’re seeking end up being underwhelming and even disappointing.” becomes “The experiences we seek often underwhelm and disappoint.” Short sentences. Most sentences can be cut in half. Keep paragraphs to less than three sentences. White space is your reader’s friend. Shrink your opening sentence. Make it compelling, but keep it short and conversational.