7 Lessons From the World's Most Captivating Presenters [SlideShare] 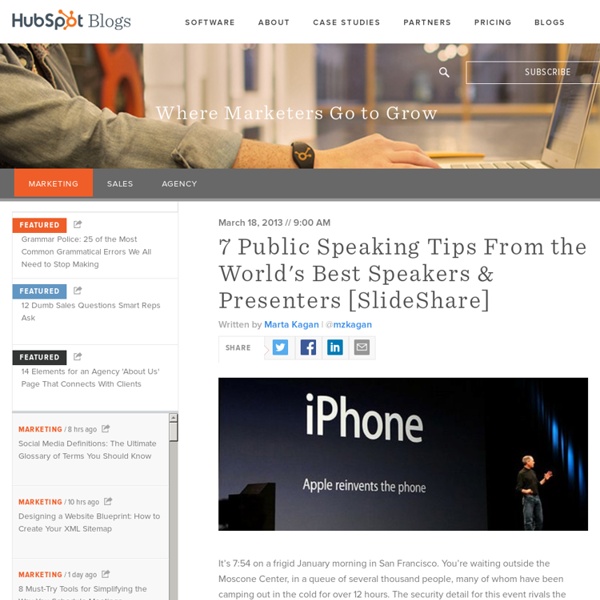 It’s 7:54 on a frigid January morning in San Francisco. You’re waiting outside the Moscone Center, in a queue of several thousand people, many of whom have been camping out in the cold for over 12 hours. The security detail for this event rivals the Democratic National Convention. Another hour passes before you’re comfortably seated in a giant auditorium that’s crackling with anticipation. Finally, at 9:43 a.m., the moment you’ve been waiting for arrives. "This is a day I've been looking forward to for two and a half years. (Download 20 of the best presentation examples to inspire your next presentation.) Such was the scene on January 9, 2007, when Steve Jobs unveiled the iPhone in one of the most captivating product launches in history. As Carmine Gallo puts it in his book, The Presentation Secrets of Steve Jobs, Steve “transformed the typical, dull, technical, plodding slideshow into a theatrical event complete with heroes, villains, a supporting cast, and stunning backdrops.

(3) Anticipatory Systems (don’t) make the news | April 2013 | rosen listserv | In brief. David Ing. On the public listserv discussing Robert Rosen’s work for April, anticipatory systems defined by a journalist reflects incomplete background research by citing Daniel Dubois. The discussion opened with: In a very typical example of how rhetoric, marketing, and computational politics work, the computing industry types have now glommed onto the phrase “anticipatory systems” and are using it to pretty much describe just what RR was *not* talking about in his book of that name. That leads to the article on “How The Internet Will Tell You What To Eat, Where To Go, And Even Who To Date” | Owen Thomas | April 10th, 2013 on ReadWrite Social, with the definition: What Is An Anticipatory System? Judith Rosen responded to David’s forum post: Daniel Dubois delayed the publication of the expanded second edition of Anticipatory Systems, by quite a bit. John Kineman also responded with the comment: Why I enjoy the term “artificial stupidity” — how do we tell it apart from “artificial intelligence”?

Nine Rhetorical Devices For Your Next Speech | Presentation Training Tips Many speakers are good at conveying information to their audiences. But how many of them are actually interesting? Rhetorical devices are too often cast aside as the province of the great Roman orators. They shouldn’t be. When executed well, they can spice up your speeches, presentations, even your one-on-one conversations. Here are nine of my favorite rhetorical devices. 1. “They are part of the finest fighting force that the world has ever known. 2. “Suffering breeds character; character breeds faith.” – Rev. 3. “Not all schooling is education nor all education, schooling.” – Economist Milton Friedman“Absence of evidence is not evidence of absence.” – Scientist Carl Sagan 4. “I have a dream that my four little children will one day live in a nation where they will not be judged by the color of their skin but by the content of their character.” – Martin Luther King, Jr. 5. 6. 7. “She’s no dummy” (she’s smart)“This is no small problem” (this is a big problem) 8. 9. Like our blog?

Systems Sciences – Google+ Beauty Pageants - Funny Beauty Pageant Interview Questions at WomansDay When Miss Teen South Carolina botched her answer to a question about the American education system during the 2007 Miss Teen USA pageant, her embarrassing slip-up became an immediate YouTube sensation. But she is far from the only beauty contestant to give a less-than-brilliant answer during her Q&A. WD rounded up the funniest pageant answers to be found on the Internet. While some make no sense and others just make you cringe, they're all sure to make you laugh. One-State Wonder Miss Hawaii Nadine Tanega's strategy at the 1992 Miss World America pageant must've been "when in doubt, mention Hawaii" because that's the only state she could think of when asked why she's proud to be an American. Just a Pretty Face Who wouldn't be nervous answering a question onstage in a bikini? She Is What She Is At the 2003 Miss Universe pageant, Miss Serbia and Montenegro, Sanja Papic, was asked, “If you could be either water or fire, which would you be and why?” Say Wha? Accentuate the Positive Miss Evasion

20 Years of Hurt? Bus Deregulation in Greater Manchester | East of the M60 It was supposed to have improved services through competition. There was even talk of drivers owning their own buses. Even fare levels were supposed to have fallen, as power moved from the monolithic PTEs and the National Bus Company to the little. How wrong they were, and how right were Greater Manchester PTE nearly 20 years ago. Between 1986 – 1993, there was plenty of competition between GM Buses (then a publicly owned Limited company) and the likes of Citibus, Bee Line Buzz Company and other PTE companies. Of course, there were some improvements to services, with some operators running minibus services via streets that tested the bigger buses. Fare levels have actually increased rather than fell since 1986, except in some cases. Rather than increased services, bus deregulation has seen strategically important routes withdrawn. Over the last two weeks, the Wilmslow Road corridor has become the subject of controversy over competition on the 85/86 routes to Chorlton. Like this:

Monroe’S Motivated Sequence Ppt Presentation Monroe’s Motivated Sequence: Monroe’s Motivated Sequence Persuasive Speaking to Sell Monroe’s Motivated Sequence A technique for organizing persuasive speeches that inspire people to take action . The Five Steps: The Five Steps Step One: Attention Step Two: Need Step Three: Satisfy Step Four: Visualization Step Five: Action Attention: Attention Get attention of audience by creating interest or desire to know more about the problem or need. Need/Problem: Need/Problem Must be shown as something that won’t go away by itself . Satisfy: Satisfy This step provides a solution to the problem, which you have created . Visualization: Visualization You describe what the world will look like if your solutions are put into place. Action: Action You will tell them what ACTIONS they can individually take to place your solutions into effect. Example: Blood Donations: Quick Review: Quick Review Monroe Motivated sequence is an organization style that is designed to act upon the logic and emotions of an audience.

Heidegger and Deleuze on Death (Nihil Unbound - Chapter IV) 6.1 Who is time? Departing from Heidegger’s 1924 lecture “The Concept of Time” Brassier traces how the question ‘what is time?’ transforms into the question ‘who is time?’ Whatness corresponds to essence (Das Was), and essence (Ousia) is understood in turn as presence-at-hand (Vorhandenheit); being-present. Its two defining characteristics are 1) temporal specificity (Jeweiligkeit) and mineness (Jameinigkeit). In Being and Time Dasein’s being-in-the-world is the synthetic unity of the three ekstases of Dasein’s self-temporalizing: being-already, being-alongside, being-towards: ‘The phenomena of the “toward…”, the “to…”, the “alongside…”, make temporality visible as the “ekstatikon” pure and simple. “Dasein is time, time is temporal. Time-in-itself is meaningless since it would amount to ‘no one’s time’, so Heidegger finally surrendered in his attempt to and gave up on the ontological autonomy of Temporality in favor of Dasein’s temporal ekstasis. 6.2 Ekstasis and ekstema

Body Language Mistakes: 5 Ways to Destroy Your Own Message « Back to Blog Posts What's your most important tool of influence in speeches and presentations? Let's dispense with some usual suspects that aren't even in the running: Your content. PowerPoint. A lectern or microphone. You'll "get warmer" if you think in terms of you rather than anything external--for you yourself are the premier influencer in your presentations by far. How to Enrich Your Presentations You've probably guessed by now that all of those items in the last paragraph constitute body language. Yes, content matters. Body language, then, is a powerful communication tool. 1. Here's why this matters: No matter how fulsome an introduction you may have received, your audience isn't really there for you until you're standing in front of them, ready to start. Nervousness makes many a presenter begin speaking before they've arrived at the place they'll be speaking from, or starting before everyone is ready. 2. Mostly, speakers do something with their hands. 3. 4. 5. No responses yet.