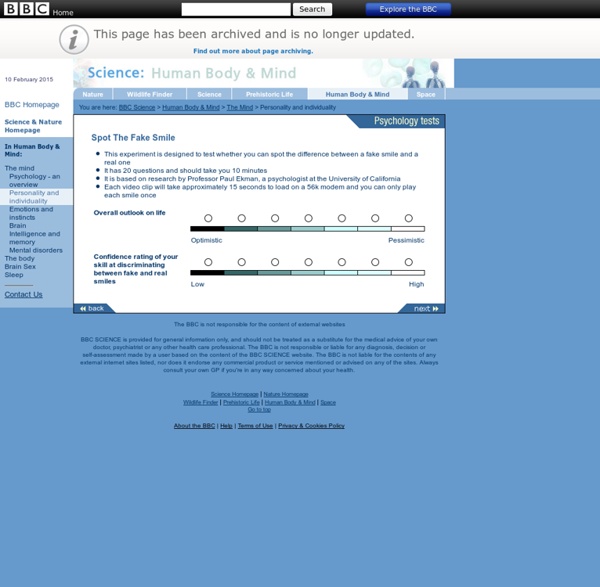 You are here: BBC Science > Human Body & Mind > The Mind > Personality and individuality The BBC is not responsible for the content of external websites BBC SCIENCE is provided for general information only, and should not be treated as a substitute for the medical advice of your own doctor, psychiatrist or any other health care professional. The BBC is not responsible or liable for any diagnosis, decision or self-assessment made by a user based on the content of the BBC SCIENCE website. The BBC is not liable for the contents of any external internet sites listed, nor does it endorse any commercial product or service mentioned or advised on any of the sites. Always consult your own GP if you're in any way concerned about your health.

Map of the Day: Disasters Around the World Since 1996 Relief Web is an online service of the UN’s Office for the Coordination of Humanitarian Affairs. It aggregates news releases, wire reports, studies, publications, maps and other resources that are relevant to the international humanitarian and disaster response community. Since 1996, Relief Web has posted and categorized over 500,000 reports. Yesterday, it released a new feature called Content Trends, in which users can see how these reports evolved over time. These reports show where the humanitarian community are involved, and therefore is a proxy for where disasters–manmade or natural–have been most consequential.

Forgotten Nations History Rome annihilated Carthage to ensure it would never again rise as a major threat. The Ottomans forever ended Byzantium’s glory. The vast armies of Persia were repeatedly beaten back by the Greeks, subjugated by the might of Alexander, and destroyed by the rise of Islam. How All 50 States Got Their Names Alabama Before Europeans landed on American shores, the upper stretches of the Alabama River in present-day Alabama used to be the home lands of a Native American tribe called – drum roll, please – the Alabama (Albaamaha in their own tribal language). The river and the state both take their names from the tribe, that's clear enough, but the meaning of the name was another matter. Despite a wealth of recorded encounters with the tribe – Hernando de Soto was the first to make contact with them, followed by other Spanish, French and British explorers and settlers (who referred to the tribe, variously, as the Albama, Alebamon, Alibama, Alibamou, Alibamon, Alabamu, Allibamou, Alibamo and Alibamu) – there are no explanations of the name's meaning in the accounts of early explorers, so if the Europeans asked, they don't appear to have gotten an answer. An un-bylined article in the July 27, 1842 edition of the Jacksonville Republican put forth the idea that the word meant “here we rest.” Alaska

END The New World Order with Global Non Compliance! The richest 300 people in Europe and North America have the same income as 4.7 billion poor people, according to a World Bank study in 2002. People need to understand the enemy, and understand the weapons they use. Then use those same weapons against them. We are in a period of massive social, political and spiritual transformation. The Truth About Your Birth Certificate. If nobody has told that you that you have a Strawman, then this could be a very interesting experience for you. Your Strawman was created when you were very young, far too young to know anything about it. But then, it was meant to be a secret as it's purpose is to swindle you, and it has been used very effectively to do just that ever since it was created. Perhaps it is about time that you learnt about your strawman and how you can stop it being used against you. Knowing about it is the most important first step.

Something Major is Being Hidden From the Public A Must Know Secret The elite have a secret so mysterious, so mind-blowing that they are doing everything they can to keep it under wraps from the public eye. I URGE you with everything in me to watch the below video in its entirety. It contains NEW information and covers covert operations, secret game plans, the Rosewell incident, Operation Majestic, Operation Grudge, AQUARIOUS, the Jason group, JFK and more! Furthermore it reveals the elites plan that will be set into motion if alien (aka: Nephilim) information is leaked or should there be a UFO takeover….and their plan will SHOCK YOU!!!!!! This information has been verified from the HIGHEST of sources and it is something you NEED to watch and share….

Anti-surveillance mask enables you to pass as someone else If you are not comfortable with the surveillance cameras, an identity replacement technology that is basically a Surveillance identity prosthetic provides you a new face. If you find all people around you having the same face like you saw of the agents in Matrix 3, then Leo Selvaggio is the one to thank. He has designed a rubber mask with the aim to foil surveillance cameras. The mask features his own visage, and if he gets his way, then many people would be supporting this Prosthetic in Public. He is basically a Chicago based artists and this prosthetic is among the three products that he made under the venture known as URME Surveillance.