3 nov. 2021 'Greenwashing = Murder': Climate Movement Marches Against Polluters' Lies in Glasgow. Climate campaigners took to the streets of Glasgow on Wednesday to denounce industry-fueled greenwashing efforts they charge are rampant within the COP26 climate summit now taking place in the Scottish city. 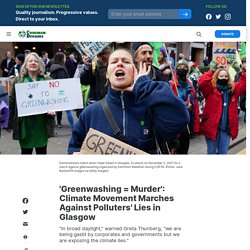 1er nov. 2021 Over 700 Groups Demand 'Real Climate Solutions, Not Net-Zero Promises' As world leaders gathered in Glasgow, Scotland on Monday for a United Nations climate summit, more than 700 organizations from nearly 100 countries took aim at net-zero pledges "premised on the notion of canceling out emissions in the atmosphere rather than eliminating their causes. 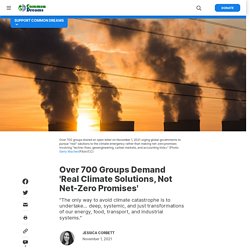 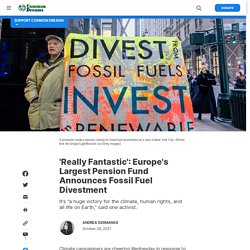 "This is really fantastic, after all these years of campaigning, we finally succeeded," said Liset Meddens, director at Fossielvrij NL, calling the development "a huge victory for the climate, human rights, and all life on Earth. " 25 oct. 2021 Why developing countries say net-zero is 'against climate justice' In less than a week, world leaders will convene in Glasgow for the most important climate conference of the year, the United Nations’ COP26. 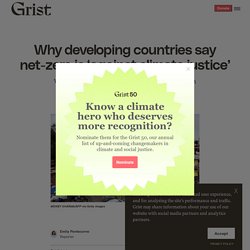 One of the biggest questions of the conference is whether developed countries like the U.S. will finally cough up the rest of the money they promised to poorer nations a decade ago to help them cut emissions and adapt to climate change. But as the conference draws near, the paucity of funding isn’t the only thing drawing the ire of developing countries and breeding distrust. Last week, a coalition of 24 developing nations that work together on international negotiations issued a statement criticizing rich countries for proselytizing a universal goal of net-zero by 2050.

22 oct. 2021 Report: Plastic is on track to become a bigger climate problem than coal. Plastic permeates the oceans, clutters landfills, and threatens to create a “near-permanent contamination of the natural environment,” according to researchers. 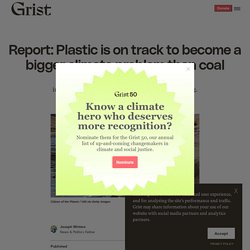 As if that weren’t bad enough, it is also a major contributor to climate change. A new report from the advocacy group Beyond Plastics says that emissions from the plastic industry could overtake those from coal-fired power plants by the end of this decade. At every step of its life cycle, the report said, plastic causes greenhouse gas emissions that are jeopardizing urgent climate goals and harming marginalized communities. “Plastic is intimately connected to the climate crisis,” said Judith Enck, a former Environmental Protection Agency regional administrator and the founder of Beyond Plastics, at a press conference unveiling the report.

Most people understand how plastic strangles the ocean and can cause health problems, she added, but far fewer have grasped its concerning climate footprint. 21 oct. 2021 'People Right Now Are Absolutely Feeling the Climate Emergency' - FAIR. 18 oct. 2021 European activists want to ban fossil fuel ads. Why can’t we do that here? Greenpeace E.U. and 20 other environmental organizations launched a new campaign this month demanding a European Union–wide ban on fossil fuel advertisements. 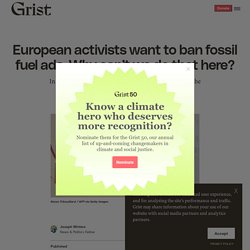 The groups’ proposal would not only prohibit the promotion of coal, oil, gas, gasoline-powered vehicles, airplanes, and so-called “false solutions” — like unrealistic paths to decarbonization — but it would also stop oil companies from advertising altogether. To kick off the effort, dozens of Greenpeace activists descended on Rotterdam to block traffic around Europe’s largest oil refinery. “Coal and gas = climate chaos,” their signs read. Across the Atlantic, U.S. -based climate activists applauded the campaign, which they say could help delegitimize fossil fuel companies in the public eye. 30 août 2021 Can a tiny clothing company force the shipping industry to clean up its act? Last month, the climate advocacy organizations Pacific Environment and Stand.earth released a report highlighting the hidden toll retail giants are taking on the planet by ferrying goods across the world on fossil-fuel-powered container ships. 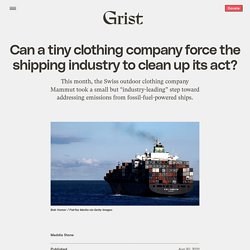 This month, the Swiss outdoor clothing company Mammut took a small but “industry-leading” step toward addressing that problem. In early August, Mammut published a strategy document outlining its plans to reach net-zero carbon emissions across its operations by 2030. Buried in the 47-page report is a pledge to transport its goods on zero-emissions vessels by the end of the decade — a move climate campaigners believe to be a first for the retail sector.

How exactly the company will achieve that goal is, at this point, uncertain: Currently, every single merchant vessel on the high seas burns fossil fuels. The shipping industry is one of the biggest climate problems most people never think about. 20 août 2021 'Out of Control': Brazilian Amazon Deforestation Hits Highest Level in a Decade. Encouraged by President Jair Bolsonaro, deforestation in Brazil's Amazon rainforest surged to its highest annual level in a decade over the past year, with researchers warning that the accelerated destruction of the critical carbon sink is imperiling the ability to keep planetary heating below the Paris climate agreement's 1.5ºC target. 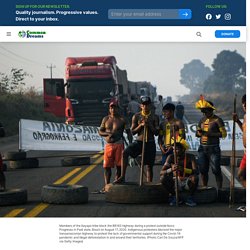 "Brazil is going against the global climate agenda that is seeking to urgently reduce greenhouse gas emissions. " 20 août 2021 Nearly Half the World's Children at 'Extremely High Risk' for Facing Effects of Climate Crisis, Report Finds. On Friday, the third anniversary of climate campaigner Greta Thunberg's lone protest outside the Swedish Parliament, a global report revealed the scale of risks posed by the climate emergency for the world's children. 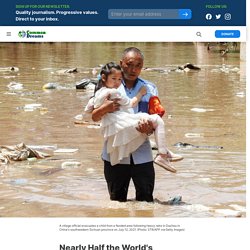 The United Nations' agency for children's rights, UNICEF, introduced the first-ever Children's Climate Risk Index, which shows that nearly half of the world's children are at "extremely high risk" for being faced with dangerous effects of the planetary crisis. "The climate crisis is a child rights crisis," said UNICEF. About one billion children live in dozens of developing countries that are facing at least three to four climate impacts, including drought, food shortages, extreme heat, and disease, the report, launched in collaboration with Fridays for Future, found. 18 août 2021 Physicians join the fight to stop Enbridge's Line 3 pipeline. Medical professionals around the country rallied on Tuesday against the expansion of Enbridge’s Line 3 crude oil pipeline, calling it a threat to human and planetary health. 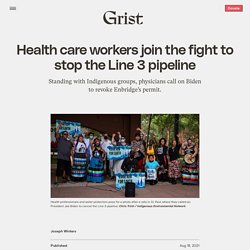 “The health of Minnesotans is at risk,” said Teddie Potter, director of planetary health at the University of Minnesota School of Nursing, addressing a crowd in St. Paul, Minnesota. “Tar sands oil threatens the health and wellness of future generations; we must stop the line.” The events were part of a nationwide day of solidarity against the project from Enbridge, a Canada-based oil and gas company. 16 août 2021 Disasters aren't natural — they're political, a new book argues.

In 2005, when Hurricane Katrina hit New Orleans, Samantha Montano was a high school junior in Maine. She signed up for a spring break service trip to help out in the aftermath in New Orleans. She had no idea what a disaster really looked like. She soon found out. In New Orleans, she was surrounded by miles of rotting debris stacked high, mold-covered homes, streets dark from lack of electricity or streetlights.

11 août 2021 Tall buildings are good for the housing crisis but create "urban canyons" In the summer of 1995, Chicago experienced one of the most deadly heatwaves in U.S. history. As temperatures spiked that July, hitting 100 degrees for five straight days, 739 Chicagoans perished, many of them old folks in cramped apartments. Two months later, the city began its 16-year project of tearing down the infamous towers of the Cabrini-Green housing project. For 50 years, the red-brick exterior high-rises of Cabrini-Green, buildings synonymous with the birth of urban renewal and public housing in America, towered over the North Side of Chicago.

5-9 août 2021 Pourquoi certaines catastrophes nous bouleversent plus que d’autres. 30 jlt 2021 Conservatives will take on climate change — if you call it something else. On July 6, lightning sparked a fast-spreading wildfire in southern Oregon that’s now the largest in the country and the state’s third-largest on record.

The Bootleg Fire, only recently getting contained after a period of cooler weather, has led more than 2,400 people to evacuate, destroyed at least 161 homes, and sent toxic smoke traveling across the country. The heat of the flames was so intense that it spawned a fire tornado. Drought and extreme heat have plagued the West this year, combining with a century’s worth of wildfire suppression for an unprecedented fire season. A warming planet makes these giant fires more likely, and people around the world are seeing the flames and smoke, coming months ahead of schedule, as a wake-up call.

29 jlt 2021 Humans are adaptable. But can we handle the climate crisis? Dear Umbra, 28 jlt 2021 Washington County's New Rules Against Fossil Fuel Expansion Celebrated as 'Blueprint' for Nation. In a move that comes as wildfires ravage the Western United States and could serve as a model for communities nationwide, the Whatcom County Council in Washington voted unanimously on Tuesday night to approve new policies aimed at halting local fossil fuel expansion. "Whatcom County's policy is a blueprint that any community, including refinery communities, can use to take action to stop fossil fuel expansion.

"—Matt Krogh, Stand.earth. 28 jlt 2021 Planet's Vital Signs Are Reaching Dangerous 'Tipping Points' Amid Climate Crisis, Scientists Warn. Why Are We Fueling Our Own Extinction? It seems abundantly clear that something any man, woman or child with a reasonable understanding of the scientific method will agree on is that we need to stop burning fossil fuels if we are to avoid the breakdown of ecosystems and runaway global warming. If you aren’t convinced, maybe the CEO of the world’s second-largest publicly traded oil and gas producer, Royal Dutch Shell, can convince you. In 2020, Ben van Beurden said “The future of energy needs to evolve as something else, and we find a role for ourselves in it.” 16 juin 2021 Record Heat and Flimsy Power Grid Across US Illustrates Urgent Need for Green Infrastructure.

With states across the southern and western United States facing record high temperatures weeks before the hottest months of the year, scientists and progressive lawmakers on Wednesday doubled down on calls for green infrastructure to ensure the nation is prepared for increasing levels of extreme weather on a rapidly warming planet. For the second time in four months, state regulators in Texas on Monday warned residents that the demand for energy was straining the state's power grid, asking millions to set their thermostats to 78 degrees or higher, turn off lights, and avoid washing clothes and cooking.