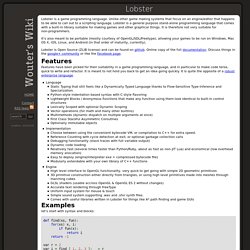 Unlike other game making systems that focus on an engine/editor that happens to be able to call out to a scripting language, Lobster is a general purpose stand-alone programming language that comes with a built-in library suitable for making games and other graphical things. It is therefore not very suitable for non-programmers. It's also meant to be portable (mostly courtesy of OpenGL/SDL/Freetype), allowing your games to be run on Windows, Mac OS X, iOS, Linux, and Android (in that order of maturity, currently). Lobster is Open Source (ZLIB license) and can be found on github. Online copy of the full documentation. Features. The Lobster C++ Implementation. This document gives hints on how to work with the Lobster C++ code in terms of building, extending, reusing, and compiling Lobster code to C++. 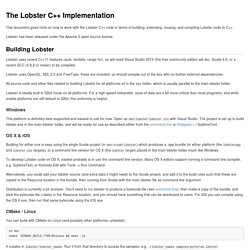 Lobster has been released under the Apache 2 open source license. Building Lobster Lobster uses recent C++11 features (auto, lambda, range-for), so will need Visual Studio 2015 (the free community edition will do), Xcode 4.6, or a recent GCC (4.8.2 or newer) to be compiled. Lobster uses OpenGL, SDL 2.0 and FreeType, these are included, so should compile out of the box with no further external dependencies. All source code and other files related to building Lobster for all platforms sit in the dev folder, which is usually parallel to the main lobster folder. Index. Lucid Synchrone is an experimental language for the implementation of reactive systems. 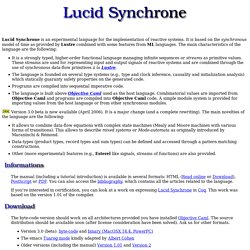 It is based on the synchronous model of time as provided by Lustre combined with some features from ML languages. The main characteristics of the language are the following: It is a strongly typed, higher-order functional language managing infinite sequences or streams as primitive values. These streams are used for representing input and output signals of reactive systems and are combined through the use of synchronous data-flow primitives à la Lustre. Lucy-n. Publications Scheduling and Buffer Sizing of n-Synchronous Systems: Typing of ultimately periodic clocks in Lucy-n. 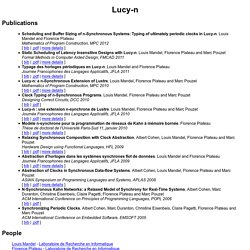 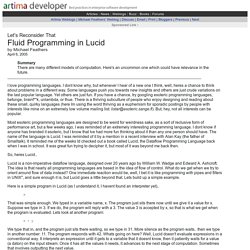 Here's an uncommon one which could have relevance in the future. I love programming languages. I dont know why, but whenever I hear of a new one I think, well, heres a chance to think about problems in a different way. Some languages push you towards new insights and others are just crude variations on the last popular language. Most esoteric programming languages are designed to be weird for weirdness sake, as a sort of reclusive form of performance art, but a few weeks ago, I was reminded of an extremely interesting programming language. The Libretto Programming Language: What is Libretto? This blog is dedicated to Libretto, a dynamic general purpose object-oriented programming language, which has been developed by our team over several years. 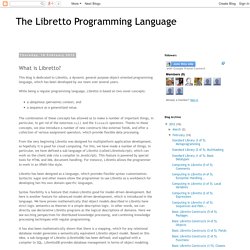 While being a regular programming language, Libretto is based on two novel concepts: a ubiquitous (pervasive) context, and a sequence as a generalized value. The combination of these concepts has allowed us to make a number of important things, in particular, to get rid of the notorious null and the foreach operators. Tutorial - Leek Wars. Welcome to the LeekScript tutorial! 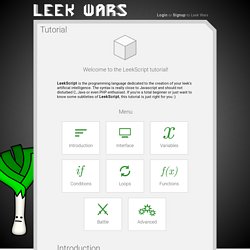 LeekScript is the programming language dedicated to the creation of your leek's artificial intelligence. The syntax is really close to Javascript and should not disturbed C, Java or even PHP enthusiast. If you're a total beginner or just want to know some subtleties of LeekScript, this tutorial is just right for you :) Menu Leek Wars allows you to raise leeks, to equip them with weapons, chips (some kind of spells), and to program their own artificial intelligence to make them fight again the others farmers' leeks ! Jesserayadkins.github. Lola-2: A Logic Description Language. Amazon Lambda bridges functional programming and the cloud. Fresh from unveiling a series of developer tools yesterday, Amazon Web Services today is previewing Amazon Lambda, a new way to build applications and run them in the cloud by leveraging lambda functions. 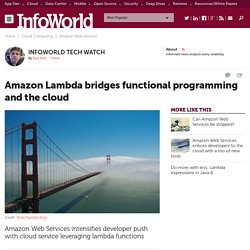 Related to functional programming, lambdas involve the use of anonymous functions. “With [the Lambda service], you simply create a Lambda function, give it permission to access specific AWS resources and then connect the function to your AWS resources,” said Jeff Barr, AWS chief evangelist, in a blog post. “Lambda will automatically run code in response to modifications to objects uploaded to Amazon Simple Storage Service (S3) buckets, messages arriving in Amazon Kinesis streams, or table updates in Amazon DynamoDB.” Lambda offers a zero-administration compute platform, so developers don't have to deal with EC2 instances. Developers can access Lambda from the AWS Management console, as well as from the AWS SDKs or AWS command-line interface. Ktg / L++ (C) 2014 Kim, Taegyoon. 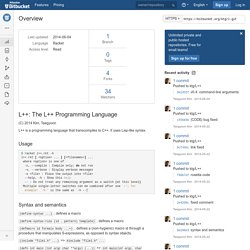 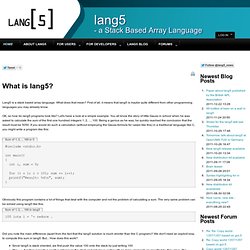 What does that mean? First of all, it means that lang5 is maybe quite different from other programming languages you may already know. OK, so how do lang5 programs look like? Looking Glass. Sgimenez/laby. Introduction to Computing Systems  GCSE Computing: Programming  - Little Man Computer LMC. Richard J. Povinelli:Teaching:Introduction to Computer Hardware and Software:Little Man Computer. Version 3.5 Prepared by Professor Susan A. Riedel, January 6, 1994 Revised by Professor Jeffrey L. L Home. LIL: The Little Interpreted Language: LIL: The Little Interpreted Language. Impworks/lens. Welcome To Zngr Web Site. Zngr L Compiler is the first Compiler for the theoretical language L , in the world , which used in the computation theory that teaches in the computer science departments in any faculty of since , as a basic language for computations . What is L ? L is language for the calculation on integers only , all its variables is integer , in L no string , character , real ,or any other type of variable .

There are three kinds of the integer variable in L all of them must be capital : - 1 - input variables : in the form X , X2 , X3, ...., note: X = X1 2- output variable: Y and there is one only output variable that its value is the result of the program . Clean, Powerful Programming. Readable Lisp S-expressions Project. Wisp: Whitespace to Lisp: An indentation to brackets preprocessor to get more readable Lisp. A few months ago I found the readable Lisp project which aims at producing indentation based lisp, and I was thrilled.

I had already done a small experiment with an indentation to lisp parser, but I was more than willing to throw out my crappy code for the well-integrated parser they had. Common Lisp development system. Loop - a programming language. Libretto. Lygon. Lygon is a logic programming language that is based on linear logic. It can be viewed as Prolog extended with features derived from linear logic. These features include a declarative notion of state and the ability to express problems involving concurrency. Also, the availability of use once predicates allows simple solutions to problems such as graph manipulation. Although the design of Lygon relies on a delicate proof-theoretic analysis of linear logic, programmers need have no knowledge of proof theory.

Linear logic can be used to model the consumption of resources. A description of Lygon, including design, implementation and applications, can be found in technical report 96/36: Hitch Hiker's Guide to Lygon 0.7. Applications Linear logic has numerous applications in computing science, including natural language processing, concurrency, logic programming and resource management (for example garbage collection). Current and Future Work History The Name Acknowledgements. Libra. What is Relational Programming? Ordinary programming languages calculate functions.

Sometimes a function is inappropriate. For example, 4 has two square roots, +2 and -2, but an ordinary programming language provides a sqrt function that returns only one of the roots. Software » lhdl. LHDL - while not a hardware description language, may be seen as the first step in that direction. Check out the README for more information. Also see the ChangeLog. L.in.o.l.e.u.m. Lemick. Free Development software downloads.