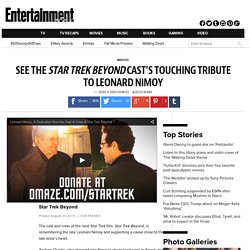 Zachary Quinto, who stepped into Nimoy’s shoes (and ears) as Spock, leads the video tribute, remembering him as “an actor, a champion of the arts, and a true inspiration to so many.” “Through his legendary portrayal of Spock, he influenced countless scientists and artists — myself and the rest of the cast included,” Quinto added. Star Trek Star Trek: The Official Magazine's Nimoy Tribute. Star Trek: The Official Magazine, Issue #53, is out now from Titan Publishing. 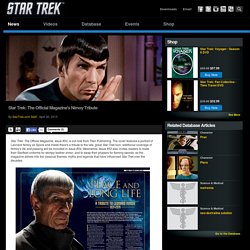 The cover features a portrait of Leonard Nimoy as Spock and inside there's a tribute to the late, great Star Trek icon; additional coverage of Nimoy's life and passing will be included in Issue #54. Meanwhile, Issue #53 also invites readers to trade their Starfleet uniforms for skimpy leather armor, and to swap their phasers for flaming swords, as the magazine delves into the classical themes, myths and legends that have influenced Star Trek over the decades. Readers will also learn how Trek couture is becoming high fashion, discover how Gary Seven faced of against Khan during the Eugenics Wars and catch up with Roxann Dawson, who looks back on her days as B'Elanna Torres on Voyager and discusses her current work as a respected television director in an exclusive interview. Visit titanmagazines.com for additional details and to subscribe to Star Trek: The Official Magazine. Diane Duane. 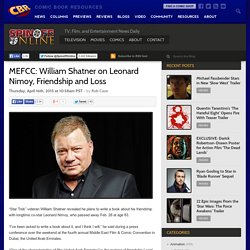 “I’ve been asked to write a book about it, and I think I will,” he said during a press conference over the weekend at the fourth annual Middle East Film & Comic Convention in Dubai, the United Arab Emirates. “One of the characteristics of [the United Arab Emirates] is the making of friendship,” said Shatner, who recently turned 84. “Once you are a friend, it becomes a lifelong tie. It’s a little more casual back in the States where friends are difficult to make and abide with. But Leonard and I knew each other for many, many years.” Storehouse. 11049564_919204051457196_6964299132006278909_n.jpg (JPEG Image, 837 × 600 pixels) Live Long and Prosper: The Jewish Story Behind Spock, Leonard Nimoy's Star Trek Character. Zachary Quinto vs. Leonard Nimoy: "The Challenge" Leonard Nimoy’s Son Plans Spock Documentary. Star Trek Trek IRL: Nimoy's Anti-Bullying Message, Today. Stardate: 032515.1. 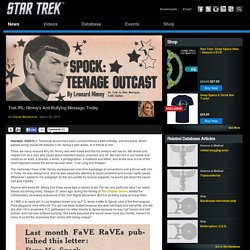 Tomorrow would have been Leonard Nimoy’s 84th birthday, and this piece, which passes along crucial life lessons in Mr. Nimoy’s own words, is in tribute to him. There are many reasons why Mr. Nimoy was well-loved and that his memory will live on. We revere and respect him as a man who cared about important issues, onscreen and off. The memories I have of Mr. Anyone who knew Mr. In 1968, a bi-racial girl in Los Angeles known only as F.C. wrote a letter to Spock, care of the then-popular Fave Magazine (now defunct). Compassionately, Mr. F.C’s letter and Leonard’s answer ran in Fave, where he insightfully wrote of Spock, “He was very lonely and no one understood him. And then, Mr. We face the same problems today, where differences are unfortunately still not always lauded as a good thing.

Mr. I love that. Star Trek Nimoy, Leonard. Born and raised in Boston, Leonard Nimoy started acting as a boy, but moved to Los Angeles at age 18 to give it a go on a professional level. 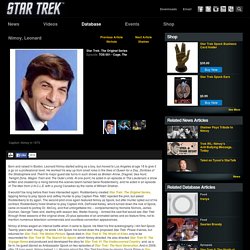 He worked his way up from small roles in the likes of Queen for a Day, Zombies of the Stratosphere and Them! To major guest star turns in such shows as Broken Arrow, Dragnet, Sea Hunt, Twilight Zone, Wagon Train and The Outer Limits. At one point, he acted in an episode of The Lieutenant, a show written and created by a rising behind-the-scenes talent named Gene Roddenberry, and he acted in an episode of The Man from U.N.C.L.E. with a young Canadian by the name of William Shatner. It wouldn't be long before their lives intersected again. Roddenberry created Star Trek: The Original Series, tapping Nimoy to play Spock and Jeffrey Hunter to play Captain Pike. Zachary Quinto pays tribute to Leonard Nimoy on 'Conan' I Miss The 90s - NO! The World Needs Laughter. Moviepilot. Acclaimed director J.J. 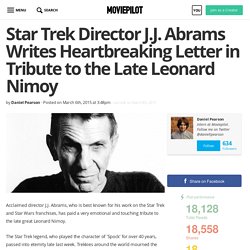 Abrams, who is best known for his work on the Star Trek and Star Wars franchises, has paid a very emotional and touching tribute to the late great Leonard Nimoy. The Star Trek legend, who played the character of 'Spock' for over 40 years, passed into eternity late last week. Trekkies around the world mourned the sad loss of an iconic actor who came to embody the entire franchise. 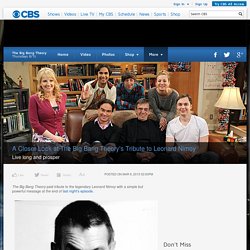 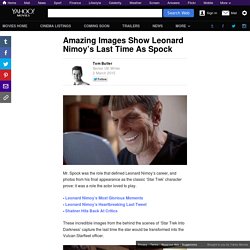 Spock was the role that defined Leonard Nimoy’s career, and photos from his final appearance as the classic ‘Star Trek’ character prove: it was a role the actor loved to play. - Leonard Nimoy’s Most Glorious Moments- Leonard Nimoy’s Heartbreaking Last Tweet- Shatner Hits Back At Critics These incredible images from the behind the scenes of ‘Star Trek Into Darkness’ capture the last time the star would be transformed into the Vulcan Starfleet officer. His final time as Spock came in JJ Abrams’ 2013 sequel, where he appeared alongside the new cast including Zachary Quinto who plays the young Spock in the new films. George Takei says Leonard Nimoy was 'the most human person I've ever met' 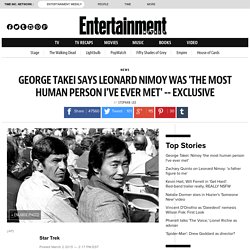 EW talked with the actor about his favorite memories of Nimoy and the brilliant actor - and friend - he remembers him to be. Related EW: What were your initial thoughts upon hearing about Leonard’s death? GEORGE TAKEI: He was a great man. I learned of his passing in a sad irony. Zachary Quinto remembers Leonard Nimoy: He was 'more of a father figure to me than anyone else' Zachary Quinto Remembers ‘Father Figure’ Leonard Nimoy. Tumblr_nkgh2oY5Yz1qj7my2o1_1280.png (PNG Image, 700 × 1002 pixels) Leonard Nimoy: Things You Didn’t Know About ‘Star Trek’ Actor’s Career.

1968 Ron Galella/Getty Images Leonard Nimoy leaves a proud legacy as an actor, teacher, philanthropist and advocate for many of the qualities he infused in his enduring alter-ego, the science- and logic-loving Mr. 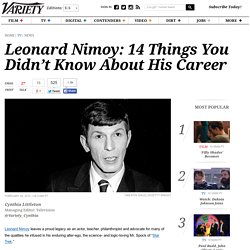 Spock of “Star Trek.” But who knew Nimoy once owned a pet shop in Canoga Park? Or that he teamed with Vic Morrow in 1962 to produce an indie film based on Jean Genet’s edgy play “Deathwatch.” Or that he paid for and narrated a TV special, “If The Mind Is Free,” that aired only in Chicago to raise money for the city’s St. Star Trek Online players pay tribute to Leonard Nimoy.

Leonard Nimoy 1931 - 2015 A few images that pay... NASA astronaut gives Leonard Nimoy the Vulcan salute from space. Simpsons Writer Al Jean Remembers Leonard Nimoy. Tumblr_nkjrfdi0Da1s88fg4o1_500.png (PNG Image, 490 × 504 pixels) Bruno Mars - The Lazy Song [Official Alternate Version] Leonard Nimoy's Advice To A Biracial Girl In 1968 : Code Switch. It wasn't supposed to be "Leonard Nimoy + Biracial Kids Day" here at Code Switch, but the news takes you where it takes you. BuzzFeed's Leonora Epstein uncovered this blog post from the blog My Star Trek Scrapbook, which features a letter from a 1968 issue of the defunct teen magazine FaVE! In a letter addressed to Mr. Spock, a young biracial girl laments that she doesn't fit in with either her black or her white peers. "I know that you are half Vulcan and half human and you have suffered because of this," the girl named F.C. wrote. "My mother is Negro and my father is white and I am told this makes me a half-breed. ...

Nimoy was so moved by the letter that he responded at length in the next issue. Read the whole exchange below: Welcome to level 7 : Photo. William Shatner, Zachary Quinto, George Takei & More Remember Leonard Nimoy. Following the tragic passing of Leonard Nimoy, those who worked with and admired the Star Trek actor have posted emotional responses on their social media accounts. William Shatner, who co-starred with Nimoy on the original Star Trek television series and films as Captain Kirk, left a heartfelt message for his friend on Twitter, writing, “I loved him like a brother.

We will all miss his humor, his talent, and his capacity to love. " NASA Issues Statement On Leonard Nimoy's Passing. Adding to the collective voice of the entertainment community, social media and President Barack Obama, the National Aeronautics and Space Administration (NASA) has issued a statement regarding the passing of actor and filmmaker Leonard Nimoy. “Leonard Nimoy was an inspiration to multiple generations of engineers, scientists, astronauts, and other space explorers.

As Mr. Spock, he made science and technology important to the story, while never failing to show, by example, that it is the people around us who matter most," NASA Administrator Charles Bolden wrote in a statement. “NASA was fortunate to have him as a friend and a colleague. He was much more than the Science Officer for the USS Enterprise. These Are Leonard Nimoy's Touching Final Words Of Wisdom. Spock's Funeral SCENE - Star Trek: The Wrath of Khan MOVIE (1982) - HD.