The grasshopper effect. Stealthy, Debilitating Disease Is Poised to Sweep the U.S. — NOVA Next. Tourists have long flocked to the Caribbean for its white sandy beaches, turquoise waters, and year-round warm temperatures and sunshine. 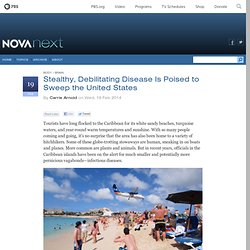 With so many people coming and going, it’s no surprise that the area has also been home to a variety of hitchhikers. Some of these globe-trotting stowaways are human, sneaking in on boats and planes. More common are plants and animals. But in recent years, officials in the Caribbean islands have been on the alert for much smaller and potentially more pernicious vagabonds—infectious diseases. The island of Saint Martin—popular with tourists—has been hit hard by an outbreak of a mosquito-borne illness. So when Sylvie Cassadou, an epidemiologist on the islands of Guadaloupe, St. Untitled. Synthetic chemicals which are used in the processing, packaging and storing of the food we eat could be doing long-term damage to our health, environmental scientists warn. 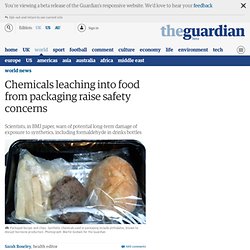 The concerns have been raised in the Journal of Epidemiology and Community Health, part of the British Medical Journal group. The scientists claim that tiny amounts of synthetic chemicals leach into food. While these minute quantities in themselves do no harm, no one knows how safe we are from a lifetime's exposure to the chemicals, such as formaldehyde, through eating food previously wrapped or stored in plastics. A Mafia Legacy Taints the Earth in Southern Italy.

CASAL DI PRINCIPE, Italy — The Italian state arrived in the heartland of the Camorra mafia this month bearing a backhoe. 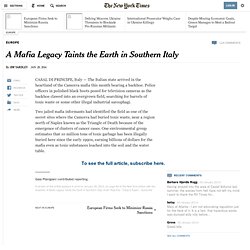 Police officers in polished black boots posed for television cameras as the backhoe clawed into an overgrown field, searching for barrels of toxic waste or some other illegal industrial sarcophagi. Two jailed mafia informants had identified the field as one of the secret sites where the Camorra had buried toxic waste, near a region north of Naples known as the Triangle of Death because of the emergence of clusters of cancer cases. One environmental group estimates that 10 million tons of toxic garbage has been illegally buried here since the early 1990s, earning billions of dollars for the mafia even as toxic substances leached into the soil and the water table. Research Shows New Flu Viruses Often Arise In Domestic Animals : Shots - Health News. Hide captionThe 2009 H1N1 flu virus viewed under the microscope. 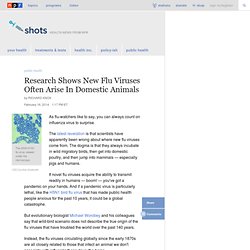 CDC/Cynthia Goldsmith As flu-watchers like to say, you can always count on influenza virus to surprise. The latest revelation is that scientists have apparently been wrong about where new flu viruses come from. The dogma is that they always incubate in wild migratory birds, then get into domestic poultry, and then jump into mammals — especially pigs and humans. If novel flu viruses acquire the ability to transmit readily in humans — boom! But evolutionary biologist Michael Worobey and his colleagues say that wild-bird scenario does not describe the true origin of the flu viruses that have troubled the world over the past 140 years. Instead, the flu viruses circulating globally since the early 1870s are all closely related to those that infect an animal we don't associate with influenza these days: the horse. Hulton Archive/Getty Images At the same time, a flu-like disease was killing chickens, ducks, geese and turkeys. 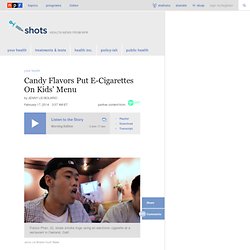 Jenny Lei Bolario/Youth Radio Electronic cigarettes are often billed as a safe way for smokers to try to kick their habit. But it's not just smokers who are getting their fix this way. According to a survey published by the Centers for Disease Control and Prevention, 1 in 5 middle school students who've tried one say they've never smoked a "real" cigarette. And between 2011 and 2012, e-cigarettes doubled in popularity among middle and high school students. At a middle school in the San Francisco Bay Area, Viviana Turincio, an 8th grader, recently noticed some kids smoking in class — or at least, that's what it looked like. 'Bizarre' Cluster of Severe Birth Defects Haunts Health Experts. A mysterious cluster of severe birth defects in rural Washington state is confounding health experts, who say they can find no cause, even as reports of new cases continue to climb. 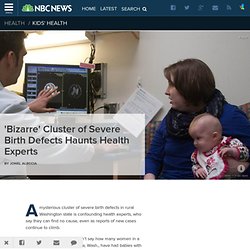 Federal and state officials won’t say how many women in a three-county area near Yakima, Wash., have had babies with anencephaly, a heart-breaking condition in which they’re born missing parts of the brain or skull. And they admit they haven't interviewed any of the women in question, or told the mothers there's a potentially widespread problem. But as of January 2013, officials with the Washington state health department and the Centers for Disease Control and Prevention had counted nearly two dozen cases in three years, a rate four times the national average. “It does strike me as a lot,” says Ball. And at least one Yakima mother whose baby is part of the cluster says no one told her there was a problem at all.

James Cheng / for NBC News At a regional medical meeting, there were more anecdotal reports.