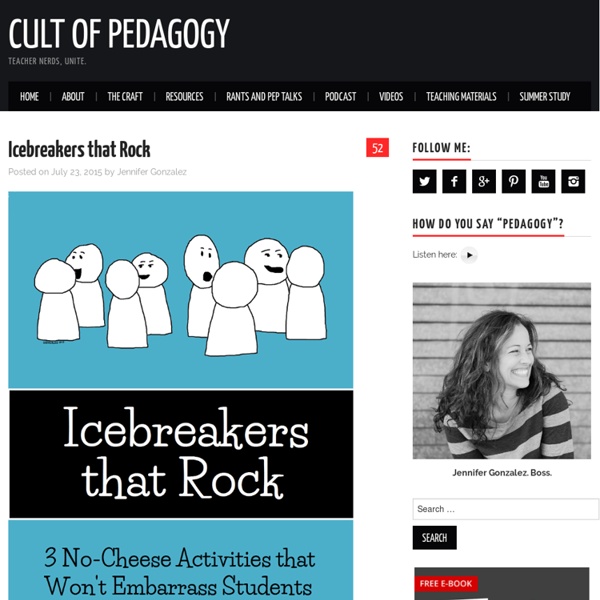 We’re coming up fast on the beginning of another school year. That means a new batch of students to get to know, students who need to be made comfortable in your classroom, and who need to get to know each other. It’s essential to start building relationships with your students right from the start. And how to accomplish this? Icebreakers. I planned to create a nice big post with dozens of icebreaker ideas you could choose from. They require students to take massive social risks with people they barely know. So I have scrapped my plan to curate good icebreakers from the Internet. In my own classrooms, with middle school, high school, and college students, I have played all three of these games with great success. Each of these will likely sound familiar to you, although the names may not be exactly what you’ve known them as. Blobs and Lines Here are some sample prompts you can use for this game: Concentric Circles Do you play any sports? This or That Sample questions for This or That:

20 Three-Minute Brain Breaks Wednesday's guest post about why kids need to move from pediatric occupational therapist Loren Shlaes was so popular that I decided to follow it up with a list of Brain Breaks you can use with your students. These are great to use anytime your students are feeling restless and are struggling to pay attention. Most of these will only take a few minutes, and then you can get back to the lesson with your students ready to focus on the lesson at hand.5-4-3-2-1. In this simple game, students stand up and the teacher (or leader) has them do five different movements in descending order. For example the teacher would say: "Do fivejumping jacks, spin around four times, hop on one foot threetimes, walk all the way around the classroom two times, give your neighbor one high-five (pausing in between each task for students to do it).Trading Places Have students stand behind their pushed-in chairs.

Top secret pages of 9/11 report released to public In a vault under the capitol, 28 pages of one of the country's most sensitive documents holding 9/11 secrets have been shelved for 13 years. Today, after pressure from former members of Congress - many of whom spoke out on 60 Minutes in April - and relatives of victims, the pages have been released to the public. Former U.S. Senator Bob Graham, who helped write the 9/11 report and read the redacted pages, told correspondent Steve Kroft in April, the pages could reveal a "substantial" Saudi support network for the 9/11 hijackers while they were in the U.S. "I think it is implausible to believe that 19 people, most of whom didn't speak English, most of whom had never been in the United States before, many of whom didn't have a high school education-- could've carried out such a complicated task without some support from within the United States," Graham told Kroft. With today's release, the question of Saudi Arabia's involvement is still unclear.

I am still thinking through how I really should teach vocabulary. More and more, I’m convinced I should toss the lists (certainly the laborious, too-long ones from the textbook), but I’m not confident yet that I can toss them completely. Although it’s likely that vocabulary is better acquired through storytelling, in chunks, and not as part of themed lists, Spanish I is still tough because at this point students need a lot of words at the get-go. I’ve included my beginning of the year vocabulary booklet, which includes some basic greetings and classroom objects so we can quickly function in the TL in the classroom. Most of my students come knowing some colors and numbers and adjectives, so I introduce them fairly quickly and have good community-building games to play with them. I also like to quickly teach these basic terms so that circumlocution is possible early-on.

The Warm Demander: An Equity Approach Recently, I was talking with a high school student about his frustrations with a first-year teacher. The student said, "I like [the teacher] because he's understanding, but he doesn't require enough discipline. He tells us to stop talking, but he doesn't really do anything to stop it. If I say, 'I forgot my homework,' he extends the deadline, and he keeps extending it, so I don't bother doing it. He needs to be more strict!" He didn't know it, but this student was asking for his teacher to be more of a warm demander -- a key strategy for creating equity in the classroom. 20 Ways to Keep Your Students' Attention As the end of the year approaches, it can be more and more challenging to keep your students' attention. Brain Breaks are important, but there are plenty of things you can do within a lesson to keep kids from day dreaming...or worse yet, nodding off. Here are some ideas:Desk Switch: Students have ten seconds (count down from ten) to find another desk to sit in that is in a different part of the room than his or her normal desk. Students stay in that desk for the rest of the lesson. Why? Two reasons, first switching desks gets them up and moving.

Energizing Brain Breaks: Toe Tapping Energizing Brain Break Toe Tapping 1. Stand Up.2. Face your partner.3. Both you and your partner put out your right leg and tap your right feet together 1 time and say "1" out loud.4. Tap your left feet together 3 times and say "3" out loud.5. 5 Fun Short Video Tools to Help You Jump In to Video Content Creation Video is huge. It dominates every platform on every newsfeed. But how can you jump in and start creating video?

Who doesn’t love teaching Spanish songs in class? Music sticks in our minds, uses repetitive language, and makes us fall in love with culture. For a long time, I used authentic songs badly. I wanted to do more, but because my class was textbook and grammar-centered, I felt like I had little time. 10 Team-Building Games That Promote Collaborative Critical Thinking One of education’s primary goals is to groom the next generation of little humans to succeed in the “real world.” Yes, there are mounds of curricula they must master in a wide breadth of subjects, but education does not begin and end with a textbook or test. Other skills must be honed, too, not the least of which is how to get along with their peers and work well with others. 20 Ways To Get A Noisy Classroom's Attention 20 Ways To Get A Noisy Classroom’s Attention by Terry Heick Okay, so this isn’t about rethinking teaching and learning in a connected world, but that doesn’t change the fact that for many of you, simply beginning class can be the most challenging thing you do all day. It’s not easy. My go-to for years what to simply start teaching, somewhat quietly, and hope students caught on, but I found that stressed some students who were trying to hear and couldn’t, so I had to come up with different strategies. While muting an entire classroom for 35 minutes at a time so they “listen” isn’t ideal, every teacher needs to quiet a noisy classroom at some point.

5 Tips for keeping kids active throughout the day It doesn’t take many weeks into the school year before you start noticing a change in your students. Gone is the excitement generated at the beginning of the school year when learning is fresh. Now, students are struggling to stay on task. To boost engagement, give your learners ways to stay active throughout the day. Starbucks trials recyclable cups in move to tackle landfill waste Starbucks will trial a fully recyclable coffee cup in its UK shops, which could eventually divert huge numbers of cups away from landfill. The cup, invented by entrepreneur and engineer Martin Myerscough, aims to reduce the environmental impact of the 2.5bn paper coffee cups used in the UK each year. Earlier this year it emerged that only one in 400 were recycled and the rest sent to landfill or incineration. This led to calls for a ban, an idea the government rejected.

We already been in school for a month, but I was putting this post off until I could take better pictures. That hasn’t happened, like many things on my to-do list… ah, the life of a teacher and mother. I am teaching every period this year, with no planning period, and I’m trying to be as organized as possible to deal with paperwork and keep things in their place. I moved rooms, as well as taking on some history blocks, so I was going for a streamlined look that would be calming for me and for my students. My room is tiny, but I love it. Here’s the grand tour: Homework is wrecking our kids: The research is clear, let’s ban elementary homework “There is no evidence that any amount of homework improves the academic performance of elementary students.” This statement, by homework research guru Harris Cooper, of Duke University, is startling to hear, no matter which side of the homework debate you’re on. Can it be true that the hours of lost playtime, power struggles and tears are all for naught?