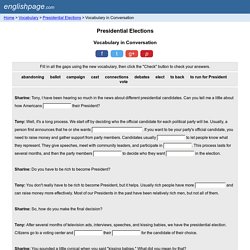 Can you tell me a little about how Americans their President? Tony: Well, it's a long process. We start off by deciding who the official candidate for each political party will be. Usually, a person first announces that he or she wants . If you want to be your party's official candidate, you need to raise money and gather support from party members. Sharine: Do you have to be rich to become President? Tony: You don't really have to be rich to become President, but it helps. Sharine: So, how do you make the final decision? Tony: After several months of television ads, interviews, speeches, and kissing babies, we have the presidential election.

Sharine: You sounded a little cynical when you said "kissing babies. " Tony: Well, it's quite common for politicians to have themselves photographed kissing babies. How to Become President of the USA Poster. Download or order a poster.

(Please get your parent's permission) Lesson PlanVideos: The Requirements, Primaries and Caucuses, Conventions to Election, How Votes Are Counted, How to Become President U.S. Constitution's Requirements for a Presidential Candidate At least 35 years oldA natural born citizen of the United StatesA resident of the United States for 14 years Step 1: Primaries and Caucuses There are many people who want to be president and each of these people have their own ideas about how our government should work. Caucus: In a caucus, party members select the best candidate through a series of discussions and votes.Primary: In a primary, party members vote for the best candidate that will represent them in the general election. Step 2: National Conventions Each party holds a national convention to finalize the selection of one presidential nominee.

Step 3: General Election People in every state across the country vote for one president and one vice president. Explained: U.S. presidential election 2016. US Election 2016 explained. What Did They Say? Idioms for Political Campaigns. The presidential campaign is now “in full swing” in the United States. 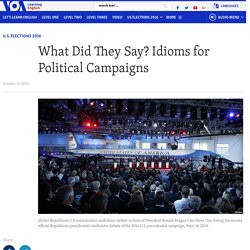 In full swing is just one of many expressions speakers of American English use that may be difficult for speakers of other languages. It means at the highest level of activity, or fully moving forward. The American Heritage Dictionary of Idioms says the phrase has been in use since the mid-1800s. It refers to “the vigorous movement of a swinging body.” Presidential candidates and the journalists who report on their activities use many political idioms and expressions. Here are some idioms and expressions that have been used recently. Frontrunner: The candidate who has the most votes or the highest level of support in public opinion surveys. Set the stage: preparing an audience for an event; to make something possible or likely; to note that participants in an event are ready and that the event will begin soon. Broaden means to make something wider or more general. The spotlight: Many politicians like the spotlight. 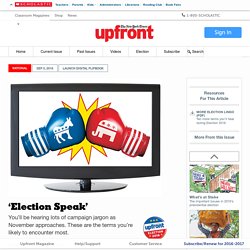 These are the terms you’re likely to encounter most. By Patricia Smith | September 5, 2016 attack/negative ads Many political ads tell you reasons to vote for a candidate. Attack, or negative, ads tell you why not to vote for someone—and they can get nasty. Battleground states States with a large number of undecided voters are known as battleground states because candidates campaign hard there, fighting for every vote.

Conservatives & liberals Conservatives, often said to be “on the right,” generally think government should play a limited role in regulating business and instituting social reforms. Electoral vote Technically, the presidency is decided not by the popular vote (total votes nationwide) but by the electoral vote. Mudslinging Particularly negative—and often nasty and very personal—campaigning. 99 (and 1) percent These terms sprouted from the Occupy Wall Street protests that began in New York in 2011.