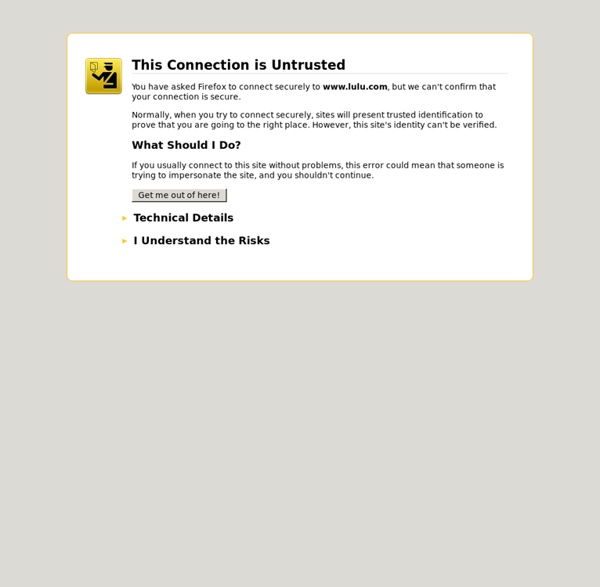 REVISED: February 13, 2014 Lulu is a community for creators of remarkable works. We provide the tools for you to publish your work for personal use or for sale and distribution to others, a marketplace for the purchase of goods and services, and a site where you can participate in forums and discussion groups with like-minded creators. The following terms and conditions have been developed to not only protect your work and your privacy, but also to describe our commitment to you as a community member as well as your responsibilities as a content creator. Please do not hesitate to contact our Support Team if you have any questions about the terms of this agreement. A Note About Our Community

Classic Books - Read.gov Turn the pages to explore bygone eras, time-honored tales and historical narratives. Adventure awaits in these classic books online. "A Apple Pie" Introduces the letters A to Z while following the fortunes of an apple pie. Read This Book Now More About this Book “A Princess of Mars,” first in the John Carter series First in series from the creator of Tarzan, this book features swordplay, daring feats, romance and six-limbed green aliens as Confederate Captain John Carter finds himself mysteriously transported to Barsoom, which we know as Mars. Read This Book Now More About this Book "Aesop's Fables" The fables of Æsop, based on the texts of L'Estrange and Croxall. Read This Book Now More About this Book "Adventures of Huckleberry Finn" This great American novel follows the adventures of a teenager and his life on the Mississippi River.

The only technique to learn something new I had a friend who wanted to get better at painting. But she thought she had to be in Paris, with all the conditions right. She never made it to Paris. Collaborating with a 4-year Old One day, while my daughter was happily distracted in her own marker drawings, I decided to risk pulling out a new sketchbook I had special ordered. It had dark paper, and was perfect for adding highlights to. I had only drawn a little in it, and was anxious to try it again, but knowing our daughter’s love of art supplies, it meant that if I wasn’t sly enough, I might have to share. (Note: I’m all about kid’s crafts, but when it comes to my own art projects, I don’t like to share.)

15 More Apps To Create Books On The iPad Creating books on the iPad doesn’t seem like the first thing you might do with one of the popular little tablets, but it’s really quite capable of doing so provided you’re not trying to write the next great novel. We’ve written about 3 apps to reate books on the iPad in the past, but the following listly by Meg Wilson goes further, including 15 apps to do so. The artful collision of technology, learning, and literacy is an idea promoted in the Common Core Standards, which is likely your rule book if you teach K-12 in an American public school. This is a new age of literacy where students can read, research, write, publish, and socialize on the same device sitting right in their lap with a pinch-and-zoom elegance that somehow makes the whole process seem easier than it really is. And for those of you that rail against both Common Core and the iPad (but obviously not literacy), keep fighting the good fight.

Being ignored on Facebook can lower self-esteem Ostracism: Rejection on social media can lower our self-esteem. That disarming feeling some people get when no one likes their post or photo on Facebook is not imaginary. A new study has found rejection on social media, even if unintended, can lower self-esteem and affect our sense of belonging. The study, by researchers from the University of Queensland, found antisocial behaviours such as "lurking" and "ostracism" are increasingly subverting our online habits and wellbeing. For the report, Threats to belonging on Facebook: lurking and ostracism, the researchers asked Facebook users two key questions: "What would happen if you weren't allowed to share information on Facebook for 48 hours?" and, "What if nobody engaged with your status updates?"

An Honest Academic Rejection Letter Free excerpt from The PHD Movie 2! - Watch this free clip from the movie that Nature called "Astute, funny"! Watch the new movie! - The PHD Movie 2 screenings are in full swing! Check out the schedule to catch the screening nearest you. Summer Hiatus - PHD has been on Summer Hiatus while Jorge finishes the new PHD Movie. I was an undercover Uber driver Two good-looking young strangers are having an amazing conversation in the backseat of my car. I'm eavesdropping so hard I nearly run a red light. Her: Then don't make me sign it. Ugh, it's like you're planning for this not to work.Him (stammering): No, I just think that, the idea is that ...Gallery Related Articles Her: I mean, what's the benefit for me in signing one?

6 Awesome Visualization Tools to Bring Out Your Inner Graphic Designer They say a picture is worth a thousand words—but online, a chart or infographic could be worth a thousand backlinks. What’s that you say? You’re the farthest thing from a graphic designer? No problem. » Writers as Rock Stars: Introducing Liner Notes, a Music Column for Writers Recently, I went to Terminal 5, a music venue here in NYC, to see UK singer Lianne La Havas perform live. I stood behind my diminutive partner while we watched roadies set up the sound for Lianne. I swayed from the Maker’s Mark I had ingested, which then combined with the two beers I consumed earlier at dinner.

Tenth Grade Tech Trends: My survey data says says rumors of Facebook demise exaggerated, but Snapchat and Instagram real Branch cofounder Josh Miller's recent post about how his 15 year old sister uses the Internet blew me away with its observations the other week. I'm 31, so young enough to remember what it was like to be young, but old enough to be out of touch with the youngest millenials and those even younger. To be honest, it's a sobering notion that there's some piece of technology out there that you and your peer group doesn't use and doesn't understand.

20 Websites To Download Free EBooks (Part III) And we’re back with Part 3! Yes, the world still loves books, no matter what version they are in: printed or electronic. Some of us prefer them in ebook version simply because they are so easy to locate, download and store for future reading and reference. In this list you can download free ebooks that range from Romance to Horror, Sci-fi to Historical Fiction. Dining philosophers problem It was originally formulated in 1965 by Edsger Dijkstra as a student exam exercise, presented in terms of computers competing for access to tape drive peripherals. Soon after, Tony Hoare gave the problem its present formulation.[1][2][3] Problem statement[edit] CPS (Creative Problem Solving) model Notes from Gary Davis's Creativity is Forever - 1998 Kendall Hunt The strategy originally was formulated by Alex Osborn (1963), creator of brainstorming, founder of the Creative Education Foundation (CEF) and co-founder of a highly successful New York advertising agency. Sidney Parnes, a bright and creative person who followed Osborn as President of CEF, invested nearly 40 years teaching creativity workshops and course and thinking about the creative process. The model is usually presented as five steps, but sometimes a preliminary step is added called mess-finding which involves locating a challenge or problem to which to apply the model.

How to Format Your Self-Published Book How to Format Your Self-Published Book by Moira Allen Return to DIY Publishing · Print/Mobile-Friendly Version As children, we were advised, "Don't judge a book by its cover!" Yet this is precisely what we do in nearly every area of life --especially when it comes to books! If you're contemplating self-publishing--whether via a print-on-demand or traditional printer--it's vital to keep that in mind. People will judge your book by appearances, and if it appears slipshod and unprofessional, readers will assume its content is no better than its presentation.

Can't go thru with ur given link on pad , plz mail me ur Link adress at pinky12305@hotmail.com by hibaowaisbutt Apr 19

Awww thanks alot for ur concern , I can't find u on twitter neither in Pinterest :( by hibaowaisbutt Apr 19

This is all my official contact points: and includes twitter (I hope to add pinterest soon). Currently there are no plans to add additional contact points or additional social media contact points--but I will make mention of them as needed. I will be happy to share your facebook page with others. Thank you. I am now following you on twitter (use lists if you find I, or your fans tweet too much about you ;) by electronics Apr 19

Go to my link at facebook www.facebook.com/HiiboviCollection U will love my dresses :) Email me at : hibovicollection@gmail.com ( to order any dress ) by hibaowaisbutt Apr 18

I operate in my own way--I don't use FaceBook, but I have included in my pearltrees: and will mention you on twitter :) by electronics Apr 18

It will b honor, if you join my page at facebook, kindly go to this link , u will directly connected to my page, I am dress designer , I design dresses and deliver them to worldwide , :) plzzz, hibovicollection@gmail.com , if interested to place any order regarding my dresses do tell me ... :) Will b waiting for ur reply .. Regards, Hiba.. by hibaowaisbutt Apr 15

I don't know who you are reffering--perhaps it's a public statement--but you have my attention, and I will share your fashion stuff with others, certainly somthing the fashion industry should be interested in. by electronics Apr 15