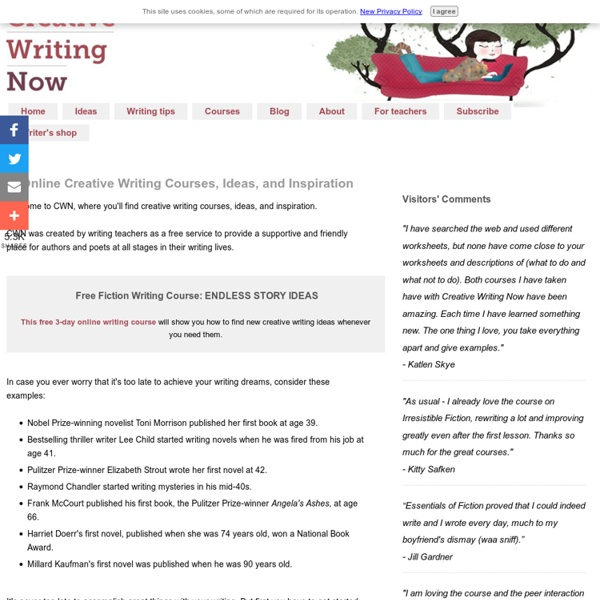 Free eBooks at Planet eBook - Classic Novels and Literature Creating an Original Character By Maisha Foster-O'Neal You've heard the old maxim before... 'a character can make or break your story.' Okay, okay, so you want to write an interesting character. You've got some plot ideas, you know a little bit about your world, but now you need your characters. Ah yes, such is the desire of all writers. Enough already! Before we dive into Creating Original Characters, I'd like to offer a disclaimer. Disclaimer: I don't claim to know everything about writing. Note: There is already an excellent tutorial about writing the Villain, so I won't make specific references to writing an antagonist. The Basics of Characters The first thing about characters - They are just one facet of a good story. Character Creation: Little Exercises Open up a phonebook and pick out a name, and write a description of that person based only on their name. Types of personality flaws These are just a few of my favourites to give you an idea of what you can add to a character. Sarcastic or cynical. A note on Romance

Here to Create & 102 Resources for Fiction Writing UPDATE 1/10: Dead links removed, new links added, as well as Revision and Tools and Software sections. Are you still stuck for ideas for National Novel Writing Month? Or are you working on a novel at a more leisurely pace? Here are 102 resources on Character, Point of View, Dialogue, Plot, Conflict, Structure, Outlining, Setting, and World Building, plus some links to generate Ideas and Inspiration. 10 Days of Character Building Name Generators Name Playground The Universal Mary Sue Litmus Test Priming the idea pump (A character checklist shamlessly lifted from acting) How to Create a Character Seven Common Character Types Handling a Cast of Thousands – Part I: Getting to Know Your Characters It’s Not What They Say . . . Establishing the Right Point of View: How to Avoid “Stepping Out of Character” How to Start Writing in the Third Person Web Resources for Developing Characters What are the Sixteen Master Archetypes? Building Fictional Characters Fiction Writer’s Character Chart Speaking of Dialogue

How to Poison your Ficiontal Characters Do you have a fictional character you need to kill, but you don't want them strangled or shot or stabbed with a knife? Do you want your murderer to kill them without letting anyone know what you plan to do or who your killer is? Try using poison. It's easy to get, easy to use, and even easier to cover up. Maybe your killer could slip some poisonous mushrooms in the victim's salad. Unlike other forms of murder, poisoning is fast and easy and doesn't require strength or a good aim, and if it's done properly, by the time the person realizes he's been poisoned, it's too late, he's already dead. Care to have one of your characters try her hand at murder? Hemlock: All parts of the plant are poisonous. There are many other poisons, too many to list here, and most of them are available to the average person. Are you thinking of writing a historical and don't know what was available at the time?

100 Best Novels ? Modern Library ULYSSES by James Joyce Written as an homage to Homer’s epic poem The Odyssey, Ulysses follows its hero, Leopold Bloom, through the streets of Dublin. Overflowing with puns, references to classical literature, and stream-of-consciousness writing, this is a complex, multilayered novel about one day in the life of an ordinary man. Click here to read more about ULYSSES THE GREAT GATSBY by F. Set in the Jazz Age, The Great Gatsby tells the story of the mysterious millionaire Jay Gatsby, his decadent parties, and his love for the alluring Daisy Buchanan. A PORTRAIT OF THE ARTIST AS A YOUNG MAN by James Joyce Published in 1916, James Joyce’s semiautobiographical tale of his alter ego, Stephen Dedalus, is a coming-of-age story like no other. Click here to read more about A PORTRAIT OF THE ARTIST AS A YOUNG MAN LOLITA by Vladimir Nabokov Lolita tells the story of middle-aged Humbert Humbert’s love for twelve-year-old Dolores Haze. BRAVE NEW WORLD by Aldous Huxley CATCH-22 by Joseph Heller U.S.A. In E.

25 Things Every Writer Should Know An alternate title for this post might be, “Things I Think About Writing,” which is to say, these are random snidbits (snippets + tidbits) of beliefs I hold about what it takes to be a writer. I hesitate to say that any of this is exactly Zen (oh how often we as a culture misuse the term “Zen” — like, “Whoa, that tapestry is so cool, it’s really Zen“), but it certainly favors a sharper, shorter style than the blathering wordsplosions I tend to rely on in my day-to-day writing posts. Anyway. Peruse these. Absorb them into your body. Let your colonic flora digest them and feed them through your bloodstream to the little goblin-man that pilots you. Feel free to disagree with any of these; these are not immutable laws. Buckle up. 1. The Internet is 55% porn, and 45% writers. 2. A lot of writers try to skip over the basics and leap fully-formed out of their own head-wombs. 3. 4. I have been writing professionally for a lucky-despite-the-number 13 years. 5. Luck matters. 6. 7. 8. 9. 10. 11.

Mythical Creatures List, Mythical Creatures A-Z 12 Greatest Apocalyptic Novels Of All Time After scouring book reviews and Wikipedia, a list of the Top 12 Best Apocalyptic Novels was born. The books on this list take you down the darkest paths in uncivilized worlds, from cannibalistic gangs to vampire infected corpses. If this list doesn't get you thinking on the quickest way stock your basement full of water, canned goods and rifles, I don't know what will! Enjoy! World War Z Documenting the war on zombies, "World War Z" takes you through horific times with some of the most vivid writing this genre has ever seen. "World War Z" paints such a realistic picture of a world after Zombies that even skeptics would find themselves engrossed in the novel! Blindness Forget world wide pandemics of flesh eating bacteria or a zombie illness! The family unit escapes and attempts to build a new life in the outside world, just as sight is returned, just as quickly as it was taken away. I don't know who I felt worse for reading this book. The Road The Postman Oryx and Crake A Canticle for Leibowitz

How I Planned My First Novel by Joanna Cravit©2004, Joanna Cravit Last year I wrote my first novel. I knew that it would not be publishable; although I have written dozens of short stories, and lots of nonfiction for my day job, this was my first attempt at a novel-length story, and I resolved to treat it as a practice run. My goal was simply to finish it and to see if I really could sustain a narrative of that length and complexity. For a first attempt, the novel did have its good points. I had a solid handle on my characters and their motivations and backstory. Our writing group decided to see if we could do any better the second time around. Step 1: Begin with an Idea For our first meeting, we began by briefly talking about the best way to ensure a tight plot: to have characters with clear goals and motivations. With this basis established, each person offered a one or two sentence summary of their basic story idea, and invited everyone else to make suggestions on it. Step 2: Work on the High Points Midpoint etc.