Women in STEM: Retention and Recruitment 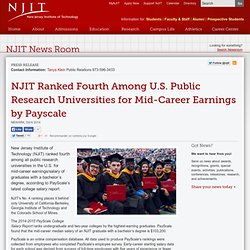 NJIT’s No. 4 ranking places it behind only University of California-Berkeley, Georgia Institute of Technology and the Colorado School of Mines. The 2014-2015 PayScale College Salary Report ranks undergraduate and two-year colleges by the highest-earning graduates. PayScale found that the mid-career median salary of an NJIT graduate with a bachelor’s degree is $103,200. PayScale is an online compensation database. Special Report - Science Nation. How to get girls more interested in STEM subjects. Eighth graders from Kelly Miller Middle School, Donte Batts, 14, left, and Endia West, 13, do a thin layer chromatography lab on June 2, 2014. 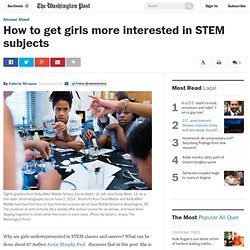 Students from Deal Middle and Kelly Miller Middle had their first face to face forensic science lab at Deal Middle School in Washington, DC. The students at both schools did a weekly after-school course for six weeks, and have been Skyping together to share what they learn in each class. (Photo by Sarah L. Voisin/The Washington Post) Why are girls underrepresented in STEM classes and careers? By Annie Murphy Paul To hear some ed tech enthusiasts tell it, online learning is sweeping aside the barriers that have in the past prevented access to education. How 'Yes Means Yes' Already Works on One Campus - Students. By Robin Wilson When Tyler Anderson spoke to first-year students at Grinnell College this fall about the institution’s policy on sexual consent, he acknowledged that asking for a partner’s approval during sex may seem unnatural. 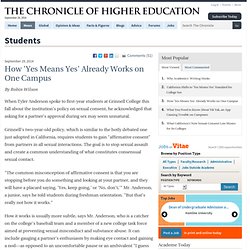 Grinnell’s two-year-old policy, which is similar to the hotly debated one just adopted in California, requires students to gain "affirmative consent" from partners in all sexual interactions. The goal is to stop sexual assault and create a common understanding of what constitutes consensual sexual contact. "The common misconception of affirmative consent is that you are stopping before you do something and looking at your partner, and they will have a placard saying, ‘Yes, keep going,’ or ‘No, don’t,’" Mr. Anderson, a junior, says he told students during freshman orientation. How it works is usually more subtle, says Mr. "We say, If you are worried about this, you may want to practice," says Mr. "The general consensus is enthusiasm for the policy," says Mr. 20 September HeForShe Press Release. Date: 20 Sep 2014 New York, 20 September—In her new role as UN Women Global Goodwill Ambassador, British actor Emma Watson will call on men and boys worldwide to join the movement for gender equality today. 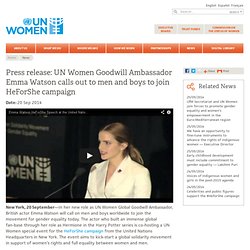 The actor who built an immense global fan-base through her role as Hermione in the Harry Potter series is co-hosting a UN Women special event for the HeForShe campaign from the United Nations Headquarters in New York. The event aims to kick-start a global solidarity movement in support of women’s rights and full equality between women and men. “I want men to take up this mantle. 2013 Murray Scholars. Why is STEM Still a Four-Letter Word for Women? Seven Leaders Weigh In  In the last few decades, women have made immense strides in both educational and occupational success, garnering higher degrees, wages and visibility in the workforce. 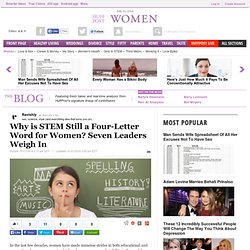 Today, according to the National Center for Education Statistics, women hold some 57 percent of the nation's bachelor's degrees, and more than 60 percent of master's degrees. This represents a remarkable shift; between 1970 and 2012, the proportion of women age 25-64 with a college degree more than tripled. Naturally, this has translated into a far more formidable presence in the workplace as well. The most recent U.S. Bureau of Labor statistics revealed that, as of 2012, 57.7 percent of women were in the workforce. LEGO to Produce Female Scientist Minifigure Set [Video] The views expressed are those of the author and are not necessarily those of Scientific American. 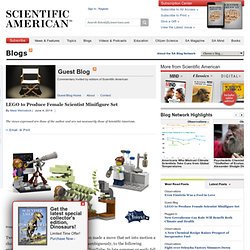 Image credit: Alatriel Elensar Two and a half years ago, the LEGO Corporation made a move that set into motion a chain of events that has led, circuitously but unambiguously, to the following exciting announcement, released yesterday via YouTube: In late summer or early fall of 2014, the company will release to the public an official set of female scientist minifigures – a paleontologist, an astronomer and a chemist. Watch the announcement at the video below: If the news sounds humdrum, believe me when I say it is not! 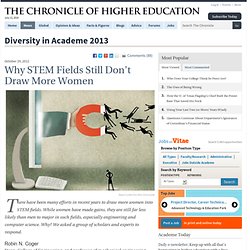 While women have made gains, they are still far less likely than men to major in such fields, especially engineering and computer science. Why? We asked a group of scholars and experts to respond. Robin N. Dean, College of Engineering, and professor of mechanical engineering, North Carolina A&T State University The Chronicle's audience is undoubtedly aware of the wealth of data available on this issue.

Our university's College of Engineering awards more bachelor-of-science degrees in engineering to African-Americans than any other university in the United States, and is a leading producer of female African-American engineers, according to 2010-11 data from the American Society for Engineering Education. I have observed that the decision to pursue a STEM major is based on two factors: (1) personal capabilities and preparedness to succeed; and (2) desire to pursue that discipline. From Nowhere to Nobels: Pathways to Success for Women in STEM.