DNA Helix Pencil Holder by Jimbotron. This is a "two parts in one print" design with no raft or supports needed. 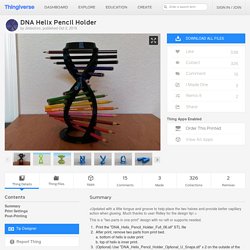 Print the "DNA_Helix_Pencil_Holder_Full_06.stl" STL fileAfter print, remove two parts from print bed. a. bottom of helix is outer print b. top of helix is inner print. (Optional) Use "DNA_Helix_Pencil_Holder_Optional_U_Snaps.stl" x 2 on the outside of the helix to secure the top and bottom parts together. These are pressure-fit snaps that fit on the outside of the Helix. Use a screwdriver to gently lever them out if you need to remove them.Assemble with glue, or your favorite adhesive to make the bond permanent. (I used super glue). Why our smartest students are failing math. As sure as one plus one equals two, it happens year after year. 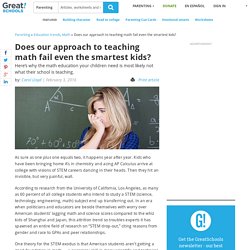 Kids who have been bringing home A’s in chemistry and acing AP Calculus arrive at college with visions of STEM careers dancing in their heads. Then they hit an invisible, but very painful, wall. According to research from the University of California, Los Angeles, as many as 60 percent of all college students who intend to study a STEM (science, technology, engineering, math) subject end up transferring out. In an era when politicians and educators are beside themselves with worry over American students’ lagging math and science scores compared to the whiz kids of Shanghai and Japan, this attrition trend so troubles experts it has spawned an entire field of research on “STEM drop-out,” citing reasons from gender and race to GPAs and peer relationships. One theory for the STEM exodus is that American students aren’t getting a good foundation in math — a necessary skill in many scientific and technical curricula. 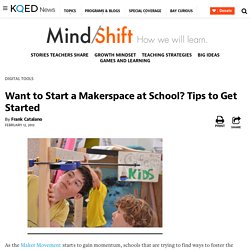 Dale Dougherty, founding editor and publisher of Make Magazine — and the de facto leader of the Maker Movement — has a vision to create a network of libraries, museums, and schools with what he calls “makerspaces” that draw on common resources and experts in each community. Libraries and museums, he said, are easier places to incorporate makerspaces than schools, because they have more space flexibility and they’re trying to attract teens with their programs. “Schools have already got the kids,” Dougherty noted wryly, at the recent American Library Association Midwinter Meeting in Seattle.

One day during the conference, dubbed Maker Monday, focused on the Maker Movement, which emphasizes learning by engaging in tech-related projects. “Why are you here?” Can Project-Based Learning Close Gaps in Science Education? Putting kids to work on meaningful projects can transform classrooms into beehives of inquiry and discovery, but relatively few rigorous studies have examined how well this teaching method actually works. 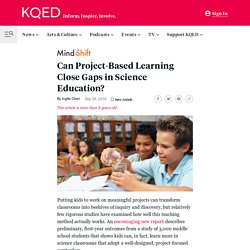 An encouraging new report describes preliminary, first-year outcomes from a study of 3,000 middle school students that shows kids can, in fact, learn more in science classrooms that adopt a well-designed, project-focused curriculum. When researchers analyzed test scores from those classrooms by students’ gender and ethnicity, there were no differences in learning performance. That’s a preliminary indication that high-quality project-based curricula might be able to help narrow the science education achievement gap in children from low-income backgrounds or other groups that are underrepresented in STEM fields.

How well the benefits hold up or grow in the second year of implementation remains to be seen. 10 Innovative Ways to Bring STEM to Schools. Freebies for Science Teachers. Graphite: Digital Resources Site Added: Dec 6, 2013 Graphite is a free online portal to help preK-12 educators find, use, and share the best digital apps, games, and websites for their students. 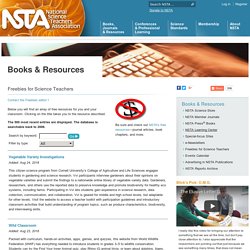 Created by Common Sense Media with funding from the Bill & Melinda Gates Foundation, the service contains objective ratings of apps and other digital learning resources from professional reviewers, along with reviews from dozens of “Graphite Educators,” teachers who are hand-picked by Common Sense Media. Graphite provides unbiased reviews of the learning potential of apps developed for a variety of platforms.

Grizzly Bears: Ready for Delisting? As part of this STEM conservation lesson plan, students use real-world data to answer this question: “Are grizzly bears ready for delisting?” 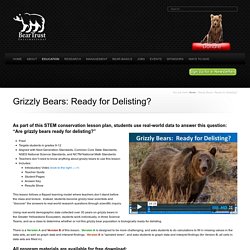 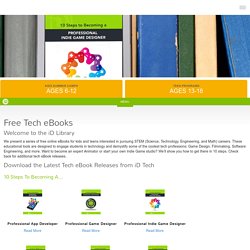 These educational tools are designed to engage students in technology and demystify some of the coolest tech professions: Game Design, Filmmaking, Software Engineering, and more. NEA Foundation Global Learning Fellows Lesson Plans. Kathryn Woerner - 1960s Reform Around the WorldResources: 1 9th Grade/US History: “1960s Reform Around the World” can be a stand-alone lesson, a lesson embedded in a 1960s Civil Right unit or a culmination activity of a study on reform. 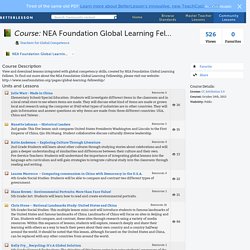 The idea of reform is not isolated to the American experience and can easily be made global by broadening the study beyond US borders to include people living in the same time trying to make a difference in their lives. The 1960s was a time of widespread protests and police restraints as well as shootings, executions and massacres around the world. Adventurelearning - Free adventure learning for the classroom. The Air Force Collaboratory.