Project Stem Cell to Neuron: a MIT/Whitehead/Columbia Collaboration - Home. UofO, balancing potency vs differentiation. Scientists Discover Key Signaling Pathway that Makes Young Neurons Connect. Neuroscientists at The Scripps Research Institute (TSRI) have filled in a significant gap in the scientific understanding of how neurons mature, pointing to a better understanding of some developmental brain disorders. 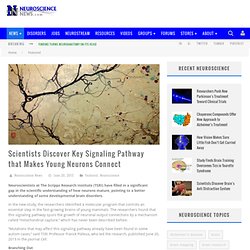 In the new study, the researchers identified a molecular program that controls an essential step in the fast-growing brains of young mammals. The researchers found that this signaling pathway spurs the growth of neuronal output connections by a mechanism called “mitochondrial capture,” which has never been described before. “Mutations that may affect this signaling pathway already have been found in some autism cases,” said TSRI Professor Franck Polleux, who led the research, published June 20, 2013 in the journal Cell. Branching Out. Roadmap Epigenomics Project - Data. 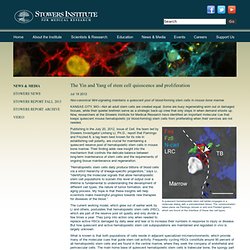 Some are busy regenerating worn out or damaged tissues, while their quieter brethren serve as a strategic back-up crew that only steps in when demand shoots up. Now, researchers at the Stowers Institute for Medical Research have identified an important molecular cue that keeps quiescent mouse hematopoietic (or blood-forming) stem cells from proliferating when their services are not needed. Probing matters of the heart. The fate of an embryonic stem cell, which has the potential to become any type of body cell, is determined by a complex interaction of genes, proteins that bind DNA, and molecules that modify those genes and proteins. 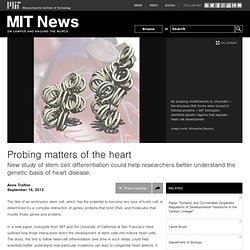 In a new paper, biologists from MIT and the University of California at San Francisco have outlined how those interactions direct the development of stem cells into mature heart cells. The study, the first to follow heart-cell differentiation over time in such detail, could help scientists better understand how particular mutations can lead to congenital heart defects. It could also assist efforts to engineer artificial heart tissue.

Research in Boyer’s lab focuses on how DNA is organized and controlled in different cell types to create the wide variety of cells that make up the human body. Inside a cell, DNA is wrapped around proteins called histones, which help control which genes are accessible at any given time. Tracking development Linking disease with DNA. Dynamic and Coordinated Epigenetic Regulation of Developmental Transitions in the Cardiac Lineage. Figure S3 Cardiac Enhancers Overlap Significantly with Enhancers Previously Identified by p300 and Heart Related Transcription Factor Binding Sites and Display Increased Conservation within a Limited Phylogenetic Distance, Related to Figure 5 (A) The frequency of total enhancers, including active and poised across all time points were plotted relative to transcriptional start sites (TSS) using the GREAT algorithm. 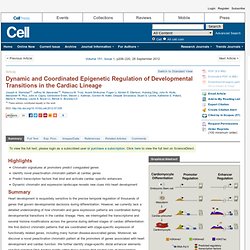 Epigenetic changes in twins of dieting mothers increases risk of obesity and diabetes. If you're expecting, this might make you feel a little better about reaching for that pint of ice cream: New research published online in the FASEB Journal suggests that twins, and babies of mothers who diet around the time of conception and in early pregnancy, may have an increased risk of obesity and type 2 diabetes throughout their lives. This study provides exciting insights into how behavior can lead to epigenetic changes in offspring related to obesity and disease. "This study may provide a new understanding of why twins can develop diabetes," said Anne White, Ph.D., study author from the Faculty of Life Sciences at the University of Manchester in Manchester, UK. "It also suggests that dieting around the time a baby is conceived may increase the chance of the child becoming obese later in life. " "This study shows that expecting mothers have to walk a really fine line when it comes to diet and nutrition," said Gerald Weissmann, M.D., Editor-in-Chief of the FASEB Journal.

In a new study, researchers from the Carnegie Institution for Science have found that reprogramming is imperfect in the early stages of differentiation, with some genes turned on and off at random. As cell divisions continue, the stability of the differentiation process increases by a factor of 100. The finding will help scientists understand how stem cells reprogram their genes and why fully differentiated cells are very hard to reprogram, knowledge with potential impacts on aging, regenerative medicine, and cancer research. A new program for neural stem cells. Max Planck researchers succeed in obtaining brain and spinal cord cells from stem cells of the peripheral nervous system. May 12, 2011 Neural stem cells can do a lot, but not everything. For example, brain and spinal cord cells are not usually generated by neural stem cells of the peripheral nervous system, and it is not possible to produce cells of the peripheral nervous system from the stem cells of the brain.