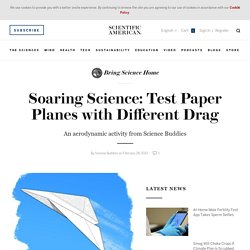 Some paper planes clearly fly better than others. But why is this? One factor is the kind of design used to build the plane. In this activity you'll get to build a paper plane and change its basic design to see how this affects its flight. Background The forces that allow a paper plane to fly are the same ones that apply to real airplanes. Materials • Sheet of paper • Ruler • Scissors • Large open area in which to fly a paper plane, such as a long hallway, school gym or basketball court. Preparation • Make a standard, "dart" design paper airplane (for instructions, go to the Amazing Paper Airplanes Web page ). • Fold your paper into the basic dart paper plane. 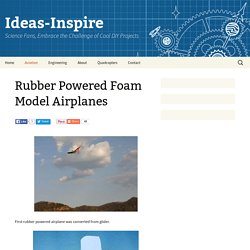 Foam rubber powered plane with propeller made from cottage cheese container. New 8-3-2015 New Foam with Balsa Fuselage Airplane With Great Promise Check Out Article Here: Fantastic Foam Flyer Video of Test Flight Video of Phases of Flight – 75 second Flight Note: For details on constructing the airplane refer to the article on this website Foam and Straw Gliders. Refer to that article also for suggestions on how to adjust the airplane. Combine a lesson of the basics of flight and practical math inBasic Aerodynamics With a Lesson I am mentioned in this new book available from Amazon: Components for This Project Propellers for Rubber Powered Airplane.

Science Fans, Embrace the Challenge of Cool DIY Projects. AMA Flight School. Foam Plate and Plastic Straw Gliders. Ideas and Inspiration In my presentations lately I have been talking much about “ideas and inspiration”. 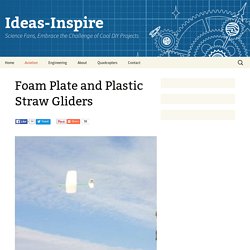 The FPG9 foam plate glider designed by Jack Reynolds has been a huge inspiration for me to expand on the idea of quick to build gliders built primarily out of foam. I was introduced to this simple glider through the activities of the Academy of Model Aeronautics and their Aerolab program. From their inspiration I have introduced the FPG9 to other people including a local hobby shop owner Kevin Guy who has introduced the FPG9 to hundreds of young people. The Civil Air Patrol has recently partnered with AMA and is inspiring thousands of young people with ideas in aviation.Instead of a gradual progression of difficulty, I jumped ahead to a more ambitious foam gliders first the Foam Jet II and then the Hammer Down Catapult Glider. Traditionally model airplanes have been constructed with balsa wood or a balsa framework covered with tissue or thin paper. 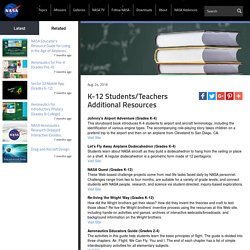 The accompanying role-playing story takes children on a pretend trip to the airport and then on an airplane from Cleveland to San Diego, CA.Visit Site Let's Fly Away Airplane Dodecahedron (Grades K-4) Students learn about NASA aircraft as they build a dodecahedron to hang from the ceiling or place on a shelf. A regular dodecahedron is a geometric form made of 12 pentagons.Visit Site NASA Quest (Grades K-12) These Web-based challenge projects come from real-life tasks faced daily by NASA personnel. Challenges range from two to four months, are suitable for a variety of grade levels, and connect students with NASA people, research, and science via student-directed, inquiry-based explorations.Visit Site Re-living the Wright Way (Grades K-12) How did the Wright brothers get their ideas?

K-12 Students/Teachers. Edutopia. 1990 Volume VII: What Makes Airplanes Fly? History, Science and Applications of Aerodynamics. Illustrative Mathematics. The scatter plot below shows the relationship between the number of airports in a state and the population of that state according to the 2010 Census. 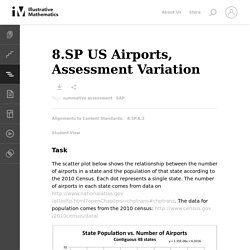