Barriers to Equality in Academia: Women in Computer Science at MIT (1983) February 1983 In my view, this is the most useful report ever written in terms of its potential to improve the environment for members of under-represented groups in academia. 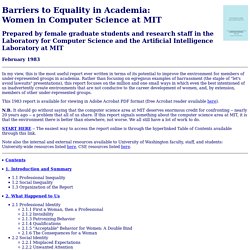 Rather than focusing on egregious examples of harrassment (the staple of "let's avoid lawsuits" presentations), this report focuses on the million and one small ways in which even the best intentioned of us inadvertently create environments that are not conducive to the career development of women, and, by extension, members of other under-represented groups. This 1983 report is available for viewing in Adobe Acrobat PDF format (free Acrobat reader available here). N.B. It should go without saying that the computer science area at MIT deserves enormous credit for confronting -- nearly 20 years ago -- a problem that all of us share.

Women must be at the heart of the digital revolution. According to a Laotian proverb, “The voice of a poor man does not carry very far.” 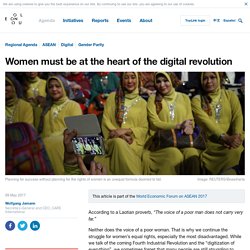 Neither does the voice of a poor woman. That is why we continue the struggle for women’s equal rights, especially the most disadvantaged. While we talk of the coming Fourth Industrial Revolution and the “digitization of everything”, we sometimes forget that many people are still struggling to move beyond the Second Industrial Revolution. The rights of women – roughly half the world’s population – to access the means to economic prosperity and the benefits of technology (as well as the protection from its dangers) will have a positive impact on the whole of society. Planning for success without planning for the rights of women is an unequal formula doomed to fail. According to the Institute for Women’s Policy Research, in 2015, female full-time, year-round American workers made only 80 cents for every dollar earned by their male counterparts. We see the same trend playing out in Asia. Image: Accenture Share. The 37 Best Websites to Learn Something New – MAQTOOB For Entrepreneurs. 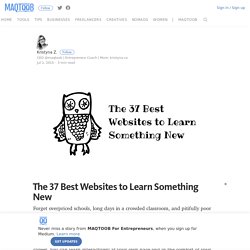 These websites and apps cover myriads of science, art, and technology topics. They will teach you practically anything, from making hummus to building apps in node.js, most of them for free. There is absolutely no excuse for you not to master a new skill, expand your knowledge, or eventually boost your career. You can learn interactively at your own pace and in the comfort of your own home. It’s hard to imagine how much easier it can possibly be. Fastcompany. Despite the recent spate of diversity and inclusion initiatives, the gap between genders in tech is just as wide as ever, according to a new report from SmartAsset. 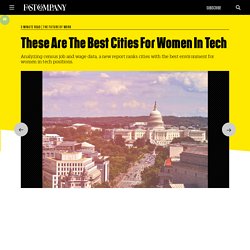 The financial software and data firm just completed its second annual analysis of Census Bureau data and found that overall, women still make up just over a quarter (26.5%) of tech jobs in the U.S. and earn, on average, 85% of what their male counterparts in similar positions earn. Evidence on Digital skills in relation to education and schools. Witnesses Tuesday 26 January 2016 at 2.15 pm, Committee Room 8, Palace of Westminster At 2.15 pm. 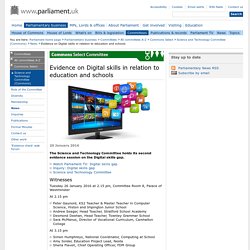 (Ellen Pao v. People Like Me: A Revolutionary Approach to Attracting Girls into STEM. Re-Recruit From the Leaky Pipeline by Seonaid Lee. Pop quiz: Who is going to be the fastest to learn new technical skills, and get them up and running to a production level? 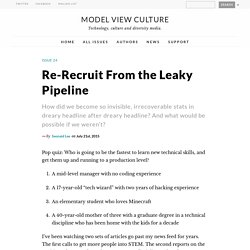 A mid-level manager with no coding experienceA 17-year-old “tech wizard” with two years of hacking experienceAn elementary student who loves MinecraftA 40-year-old mother of three with a graduate degree in a technical discipline who has been home with the kids for a decade I’ve been watching two sets of articles go past my news feed for years. The first calls to get more people into STEM. The second reports on the attrition of women from those very same disciplines. How do men, women respond to gender bias in STEM? Research has revealed that gender biases limit the opportunities for women within science, technology, engineering, and mathematics (STEM) disciplines. 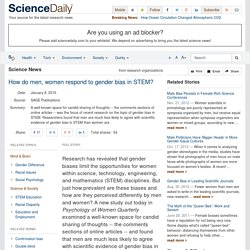 But just how prevalent are these biases and how are they perceived differently by men and women? A new study out today in Psychology of Women Quarterly examined a well-known space for candid sharing of thoughts -- the comments sections of online articles -- and found that men are much less likely to agree with scientific evidence of gender bias in STEM than women. Researchers Corinne Moss-Racusin, Aneta Molenda, and Charlotte Cramer analyzed 831 public comments made on three online news articles (from the New York Times, Discover Magazine Blog, and the IFL Science blog) that reported experimental evidence of gender bias within some areas of scientists. They found that men were more likely to respond negatively to these articles than women. New research proves gender bias extraordinarily prevalent in science, technology, engineering and math fields. With everyone from the federal government to corporate America working to encourage more women to pursue careers in science, technology, engineering and math (STEM) fields, you would think the doors would be wide open to women of all backgrounds. 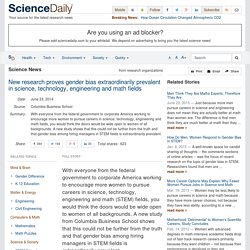 A new study from Columbia Business School shows that this could not be further from the truth and that gender bias among hiring managers in STEM fields is extraordinarily prevalent. "How Stereotypes Impair Women's Careers in Science," written by Ernesto Reuben, assistant professor of management at Columbia Business School, and recently published in Proceedings of the National Academy of Sciences, reveals the underlying biases of hiring managers, and also demonstrates the cost of discrimination.

"Studies that seek to answer why there are more men than women in STEM fields typically focus on women's interests and choices," said Professor Reuben. Dr. The Field Study The Results. Sweden: Pioneers in gender equality. The film industry has a notoriously strong masculine bias. 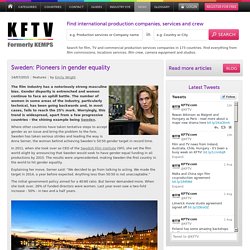 Gender disparity is entrenched and women continue to face an uphill battle. The number of women in some areas of the industry, particularly technical, has been going backwards and, in most cases, fails to reach the 25% mark. Worryingly, this trend is widespread, apart from a few progressive countries - the shining example being Sweden. Where other countries have taken tentative steps to accept gender as an issue and bring the problem to the fore, Sweden has taken serious strides and leading the way is Anna Serner, the woman behind achieving Sweden’s 50:50 gender target in record time. Society of Women Engineers. National SWE Scholarships National SWE awards over $400,000 in scholarships every year! Scholarship amounts range from $1000 to $10,000. Small Pieces Loosely Joined for Kids.