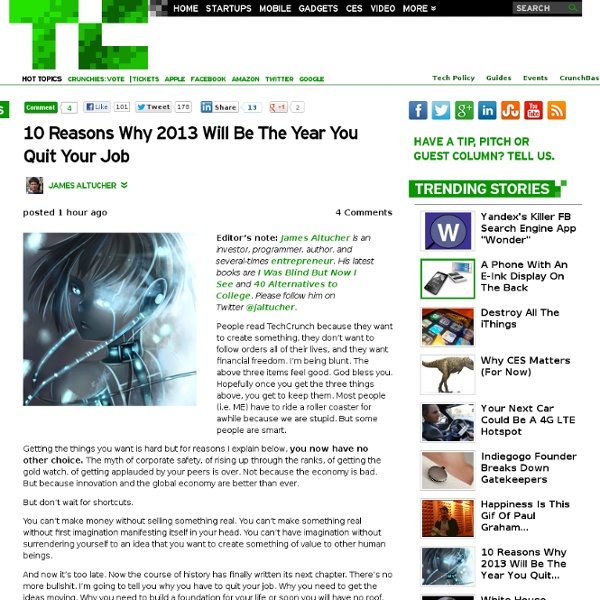 Editor’s note: James Altucher is an investor, programmer, author, and several-times entrepreneur. His latest books are I Was Blind But Now I See and 40 Alternatives to College. Please follow him on Twitter @jaltucher. People read TechCrunch because they want to create something, they don’t want to follow orders all of their lives, and they want financial freedom. I’m being blunt. The above three items feel good. Getting the things you want is hard but for reasons I explain below, you now have no other choice. But don’t wait for shortcuts. You can’t make money without selling something real. And now it’s too late. Jabba’s newest employee 1) The middle class is dead. He said, “look out the windows.” “Not all the news is bad,” he said. And that’s the new paradigm. And it was. 2) You’ve been replaced. I’m on the board of directors of a temp staffing company with $600 million in revenues. Flush. Robots are the new middle class 3) Corporations don’t like you. “What’s the problem?” 8) Excuses.

10 Skills You Need to Be the Next Great Entrepreneur If you're not deemed management material, you never get your shot at the big-time. Period. You never get the chance to learn or hone those skills that will enable you to someday start your own business. Unfortunately, a lot of people who might have turned out well never get the chance to find out or show their stuff. It's a bit of a Catch-22, I know. 3 Things I Wish I Knew Before We Got Married I used to think I had my stuff together. Then I got married. Marriage is great—but it rocked everything I knew. I quickly realized my basic goal in life, prior to getting married, was to simply remain undisturbed. This “disruption” came suddenly and was disguised as a 5-foot-nothing Swedish-Filipino woman. When I decided I’d rather not live without her, I proceeded to ask her to marry me—that is, to officially invite someone who wasn’t me to be in my personal space for the rest of my life.

Everybody, Somebody, Anybody or Nobody? Everybody, Somebody, Anybody or Nobody? | Marc Clark There is a story about four people named Everybody, Somebody, Anybody and Nobody. There was an important job to be done and Everybody was asked to do it. Women Need to Realize Work Isn't School - Whitney Johnson and Tara Mohr Academic institutions are churning out ever-more female graduates. But the very skills that propel women to the top of the class in school are earning us middle-of the-pack marks in the workplace. Indeed, a recent study found that women account for 51.4% of middle managers in the U.S. but only 4.2% of Fortune 500 CEO’s. Based on our experience, the CEO statistics will continue to improve, but only incrementally, until women recognize that the boardroom is not the schoolroom. To be successful, we must now do the very thing we were always taught not to: be disruptive.

Characteristics of the Entrepreneur: Characteristics of the Entrepreneur: Social Creatures, Not Solo Heroes Tom Byers, Stanford University tbyers@stanford.edu Heleen Kist, Stanford University heleen@unforgettable.com The 20-Minute Exercise To Eradicate Negative Thinking After a flurry of emails in response to my blog post on passion, I reached a disheartening realization: Passion is useless if you don’t already believe. You see, what we can achieve is limited by what we believe. Henry Ford knew this: “Whether you think you can or you think you can’t, you are right.” 20 Unstoppable Entrepreneurs Share Their Advice For Outstanding Success These amazingly talented male and female entrepreneurs share their most valuable advice for achieving success. There seems to be a pattern of looking past your failures and pursuing your goals with relentless persistence to reach success. Read on for some invaluable advice on how you can be successful in your business and in life.

Procrastination Is Not Laziness I was going to tackle my procrastination problem last weekend but I never got around to it. By Sunday at 5:48 p.m. I realized I had blown it again. Throughout the week I feel like I barely have enough time to cook, eat, tidy up, write an article and do the odd errand. I lean towards the weekend, when I have two whole days to finally get some work done. I'm a loser and I want to change that - now I have been a dreamer all my life. It took me until last year to figure this out, and only thanks to this community. I hardly ever tried - and when I tried, I didn't persist. It has been my goal to start a business since ever I can remember. And yet I never really tried (until last year, which resulted in abysmal failure).

The Ultimate Hack: How our newest Growth Hacker landed a job with Vidyard after 5 intense months of breaking the rules - the vidyard blog As our team continues to grow, we make it a point to hire awesome and talented people. Some come through conventional means and others, like Amar, come on board against all odds. We asked Amar to narrate the tale and our co-founders Mike and Devon to add their own perspective along the way. How to work with software engineers - by Ken Norton By Ken Norton I’ve worked in technology for twenty years, the past thirteen as a product manager. I’ve gained somewhat of a reputation for being effective at working with software engineers. This skill has earned me a place in history as one of the three greatest product managers of all time.[1] (On this exclusive list I am joined only by Steve Jobs and Niccolò Machiavelli.) For years I’ve kept my secrets close to the vest. But no longer: today I will share with you my Ten-Step Plan for Working With Engineers.

Elon Musk: The Role of Analogy and Reasoning From First Principles in Disruptive Entrepreneurship In terms of getting an insight into “Tony Stark’s” head, the last 5-ish minutes of Kevin’s Rose’s Foundation interview of Elon Musk is a gem: I think its important to reason from first principles rather than by analogy…The normal way we conduct our lives is we reason by analogy…We are doing this because it’s like something else that was done..or it is like what other people are doing…slight iterations on a theme…“First principles” is a physics way of looking at the world…what that really means is that you boil things down to the most fundamental truths…and then reason up from there…that takes a lot more mental energy…Someone could –and people do — say battery packs are really expensive and that’s just the way they will always be because that’s the way they have been in the past…They would say it’s going to cost, historically it cost $600 KW/hour. It’s not going to be much better that in the future…So first principles..we say what are the material constituents of the batteries.