Secrets of the Creative Brain 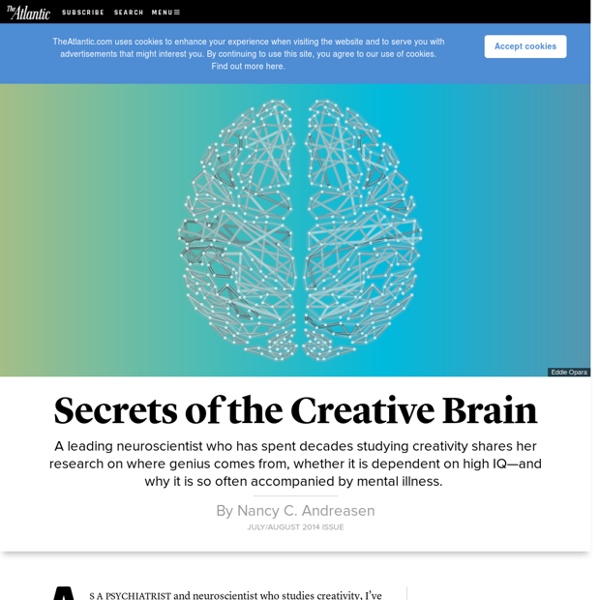 As a psychiatrist and neuroscientist who studies creativity, I’ve had the pleasure of working with many gifted and high-profile subjects over the years, but Kurt Vonnegut—dear, funny, eccentric, lovable, tormented Kurt Vonnegut—will always be one of my favorites. Kurt was a faculty member at the Iowa Writers’ Workshop in the 1960s, and participated in the first big study I did as a member of the university’s psychiatry department. I was examining the anecdotal link between creativity and mental illness, and Kurt was an excellent case study. He was intermittently depressed, but that was only the beginning. His mother had suffered from depression and committed suicide on Mother’s Day, when Kurt was 21 and home on military leave during World War II. While mental illness clearly runs in the Vonnegut family, so, I found, does creativity. For many of my subjects from that first study—all writers associated with the Iowa Writers’ Workshop—mental illness and creativity went hand in hand.

The Power of Process: What Young Mozart Teaches Us About the Secret of Cultivating Genius by Maria Popova On the “powerful blend of instruction, encouragement, and constant practice.” “The trick to creativity … is to identify your own peculiar talent and then to settle down to work with it for a good long time,” observed Denise Shekerjian in reflecting on her insightful interviews with MacArthur “genius” grantees. “Success is the product of the severest kind of mental and physical application,” attested Thomas Edison. “It is the man who carefully advances step by step, with his mind becoming wider and wider … who is bound to succeed in the greatest degree,” Alexander Graham Bell proclaimed. Anonymous portrait of the child Mozart, possibly by Pietro Antonio Lorenzoni; painted in 1763 on commission from Leopold Mozart (public domain) Wolfgang Amadeus Mozart [was] alleged to be an instant master performer at age three and a brilliant composer at age five. The Mozart family on tour: Leopold, Wolfgang, and Nannerl. Donating = Loving Brain Pickings has a free weekly newsletter.

Louis Del Monte Interview On The Singularity 10 Paradoxical Traits Of Creative People Editor's Note: This is one of the most-read leadership articles of 2013. Click here to see the full list. I frequently find myself thinking about whether I am an artist or an entrepreneur. I am simply trying my best to create my own unique path. It is safe to say that more and more entrepreneurs are artists, and artists of all kinds are entrepreneurs. Creativity is the common theme that drives both entrepreneurs and artists alike. Over this past Labor Day weekend, I found myself reading excerpts from distinguished professor of psychology and management Mihaly Csikszentmihalyi’s (pronounced me-HIGH chick-sent-me-HIGH-ee) seminal book Creativity: The Work and Lives of 91 Eminent People (HarperCollins, 1996). He writes: "I have devoted 30 years of research to how creative people live and work, to make more understandable the mysterious process by which they come up with new ideas and new things. 1. 2. 3. 5. 6. 7. 8. Without the passion, we soon lose interest in a difficult task. 10.

How safe is eating meat? 17 August 2014Last updated at 19:28 ET Dr Michael Mosley ate around 130g of meat a day to research the effects on his body There have been a lot of news reports about the health risks of meat eating, but are they justified? Dr Michael Mosley has been investigating the truth behind the headlines for BBC Horizon. I like eating meat, but what was once an innocent pleasure is now a guilty one. If you believe the headlines, regularly indulging in a steak or a bacon sandwich raises your risk of heart disease and cancer. The threat to health comes not from eating white meat, like chicken, but from red and processed meat. Despite the negative headlines, on average Brits still eat about 70g of red and processed meat a day, with a quarter of men eating almost twice as much. Continue reading the main story “Start Quote I decided to go on a high-meat diet to see what effects doubling my intake to around 130g a day would have” End Quote I visited numerous experts, finding out what they themselves eat.

Praise versus Encouragement Most of us believe that we need to praise our children more. However, there is some controversy regarding this point. If we always reward a child with praise after a task is completed, then the child comes to expect it. However, if praise is not forthcoming, then its absence may be interpreted by the child as failure. According to Naomi Aldort, "Children who are subjected to endless commentary, acknowledgment, and praise eventually learn to do things not for their own sake, but to please others." One of the main differences between praise and encouragement is that praise often comes paired with a judgment or evaluation, such as "best" or "highest" in these examples. According to Bolton (1979, pg 181): Evaluative praise is the expression of favorable judgment about another person or his behaviors: "Eric, you are such a good boy." According to Ginott (1965): Evaluative praise.....creates anxiety, invites dependency, and evokes defensiveness. According to Taylor (1979): "Mr. "Bravo! Mr. Mr.

The Most Astonishing Wave-Tracking Experiment Ever : Krulwich Wonders... Claude Monet /The Metropolitan Museum of Art I'm standing on a beach and I see, a few hundred yards out, a mound of water heading right at me. It's not a wave, not yet, but a swollen patch of ocean, like the top of a moving beach ball, what sailors call a "swell." As it gets closer, its bottom hits the rising shore below, forcing the water up, then over, sending it tumbling onto the beach, a tongue of foam coming right up to my toes — and that's when I look down, as the wave melts into the sand and I say, "Hi, I'm from New York. Yes, I'm asking a wave to tell me where it was born. His name is Walter Munk, now in his 90s and a professor emeritus at the Scripps Institution of Oceanography in La Jolla, Calif. His equations said that the swells hitting beaches in Mexico began some 9,000 miles away — somewhere in the southern reaches of the Indian Ocean, near Antarctica. "Could it be?" He decided to find out for himself. Professor Munk was not the first scientist to study swells. ...

Blackest is the new black: Scientists have developed a material so dark that you can't see it... - Science - News Puritans, Goths, avant-garde artists, hell-raising poets and fashion icon Coco Chanel all saw something special in it. Now black, that most enigmatic of colours, has become even darker and more mysterious. A British company has produced a "strange, alien" material so black that it absorbs all but 0.035 per cent of visual light, setting a new world record. If it was used to make one of Chanel's little black dresses, the wearer's head and limbs might appear to float incorporeally around a dress-shaped hole. Actual applications are more serious, enabling astronomical cameras, telescopes and infrared scanning systems to function more effectively. The nanotube material, named Vantablack, has been grown on sheets of aluminium foil by the Newhaven-based company. "You expect to see the hills and all you can see … it's like black, like a hole, like there's nothing there. A sample of the new material. "You would lose all features of the dress. "Many people think black is the absence of light.