10 places where anyone can learn to code 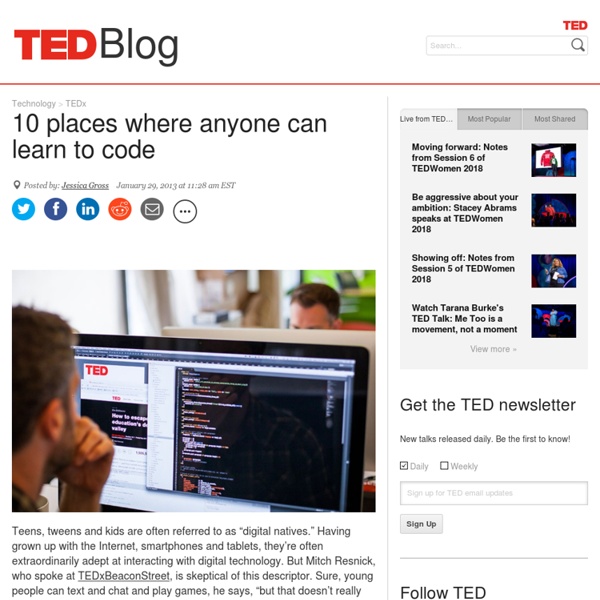 Teens, tweens and kids are often referred to as “digital natives.” Having grown up with the Internet, smartphones and tablets, they’re often extraordinarily adept at interacting with digital technology. But Mitch Resnick, who spoke at TEDxBeaconStreet, is skeptical of this descriptor. Sure, young people can text and chat and play games, he says, “but that doesn’t really make you fluent.” Mitch Resnick: Let's teach kids to code Fluency, Resnick proposes in this TED Talk, comes not through interacting with new technologies, but through creating them. The former is like reading, while the latter is like writing. The point isn’t to create a generation of programmers, Resnick argues. In his talk, Resnick describes Scratch, the programming software that he and a research group at MIT Media Lab developed to allow people to easily create and share their own interactive games and animations. While we’re at it: bonus!

The Importance of Thinking In- and Out-of-the-Box How to encourage creativity in a tech-based environment. GUEST COLUMN | by Wendy Marshall How do you teach a student to be creative? It used to be that educators encouraged innovation by telling children to “think outside the box” via a “sky’s the limit” approach. Creativity was viewed as unstructured and a result of not following rules or patterns. Teaching Coding in Class: 17 Apps to Try November 17, 2014 Today as I was going through my bookmarks, I come across this excellent visual created by Sean Junkins where he features a bunch of powerful apps to help you teach coding in the classroom. Unfortunately, the visual does not render legible enough when turned into large infographic. So instead, I am sharing with you the apps featured in it. I really like how Sean Junkins arranged these apps into different categories which will help you target different areas in the teaching of coding. Enjoy 1- Learning the basics

7 Ways to Make Your Own Video Game Steps Laying the Foundations <img alt="Image titled Make Your Own Video Game Step 1" src=" width="728" height="546" class="whcdn" onload="WH.performance.clearMarks('image1_rendered'); WH.performance.mark('image1_rendered');">1Pick your genre. While every successful game is unique in its own way, almost all of them fit into a specific genre. 10 talks you won't be able to stop thinking about Now playing Here's a TED first: an animated Socratic dialog! In a time when irrationality seems to rule both politics and culture, has reasoned thinking finally lost its power? Watch as psychologist Steven Pinker is gradually, brilliantly persuaded by philosopher Rebecca Newberger Goldstein that reason is actually the key driver of human moral progress, even if its effect sometimes takes generations to unfold.

What skills will you need to succeed in the future? Top 10 skills for the successful 21st-century worker Leadership 3 Ways Coding and Gaming Can Enhance Learning Coding isn't just for computer science any more. Educators are finding that teaching students to write code and design games enhances learning and creates engagement. These examples illustrate how coding and games are being used across the curriculum and at all levels, as well as why great teaching is at the very heart of this innovation. 14 Coding Challenges to Help You Train Your Brain Programming is becoming an essential part of nearly every industry known to man, the way it helps to organize and maintain large systems is not possible to compare to anything else, and so more and more people begin their journey. You can learn coding both from interactive platforms, and also from books – whichever you find most appropriate and easy to learn from. But, sometimes that’s not good enough, and we want to practice new things.

How to give a persuasive presentations: A Q&A with Nancy Duarte Stepping onto the TED or TEDx stage — or speaking in front of any group of people, for that matter — is truly nerve-wracking. Will you remember everything you wanted to say, or get so discombobulated that you skip over major points? Will the audience be receptive to your ideas, or will you notice a guy in row three nodding off to sleep?

Can You Teach Programming With Plywood? Primo is a $262 kit that consists of two main components—wooden robot called Cubetto and a plywood compiler board. Photo: Primo "Giving Cubetto a face was something we are proud of because it gives him a personality," says Primo managing director Filippo Yacob. "Children like him and that makes them want to help him find his way home." The Other 21st Century Skills Many have attempted to identify the skills important for a learner today in this era of the 21st century (I know it is an overused phrase). I have an affinity towards the skills identified by Tony Wagner: Critical thinking and problem-solvingCollaboration across networks and leading by influenceAgility and adaptabilityInitiative and entrepreneurialismEffective oral and written communicationAccessing and analyzing informationCuriosity and imagination Today I viewed a slideshow created by Gallup entitled, The Economics of Human Development: The Path to Winning Again in Education. Here are some slides from this presentation. This presentation sparked my thinking about what other skills and attributes would serve the learners (of all ages) in this era of learning.

8 free sites that teach you how to program Developed in 2011, the main focus of Code Academy is to teach you how to code so that you can transform your career. It features a number of success stories from individuals who knew little to nothing about coding and went on to have fruitful careers as programmers. Code Academy covers a lot of ground, including how to make interactive websites. You can take courses in Rails, Angularjs, Rails Auth, The Command Line, HTML & CSS, JavaScript, iQuery, PHP, Python and Ruby. Become a Programmer, Motherfucker If you don't know how to code, then you can learn even if you think you can't. Thousands of people have learned programming from these fine books: Learn Python The Hard Way Learn Ruby The Hard Way Learn Code The Hard Way