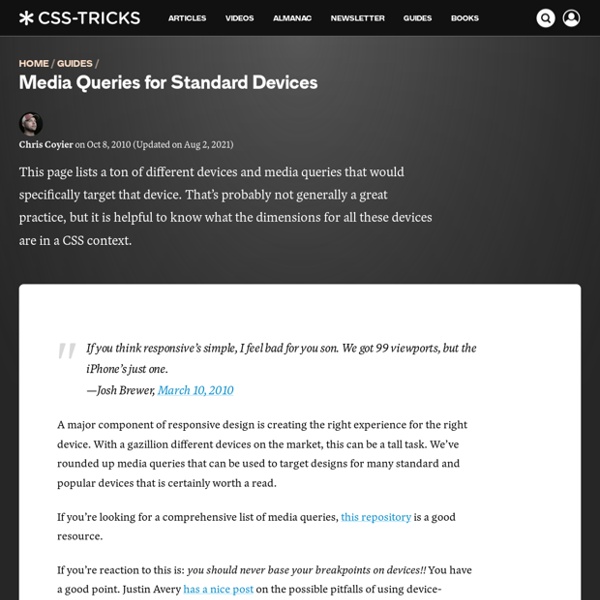 If you think responsive's simple, I feel bad for you son. We got 99 viewports, but the iPhone's just one. —Josh Brewer, March 10, 2010 A major component of responsive design is creating the right experience for the right device. With a gazillion different devices on the market, this can be a tall task. We've rounded up media queries that can be used to target designs for many standard and popular devices that is certainly worth a read. If you're looking for a comprehensive list of media queries, this repository is a good resource. If you're reaction to this is: you should never base your breakpoints on devices!! Phones and Handhelds iPhones Galaxy Phones Google Pixel HTC Phones Nexus Phones Windows Phone Tablets iPads Galaxy Tablets Nexus Tablets Kindle Fire Laptops Media Queries for laptops are a bit of a juggernaut. Wearables Yes, we're going there. Apple Watch @media (max-device-width: 42mm) and (min-device-width: 38mm) { } Moto 360 Watch

That Web Guy - An introduction to responsive web design: using media queries Written December 29, 2011. 4 comments. You’ve no doubt heard the term by now, but what exactly is Responsive Web Design? As the name suggests, Responsive Web Design (from hereon in referred to as RWD) is about designing your web site with the use of media queries so that it responds (changes the presentation) to the web browser width, or in the case of mobile devices, the capabilities of said device. Essentially it’s about building a web site that’s device unbiased.

Responsive Web Design Formula for Percentage - Easy Calculator It's actually pretty easy with "the magic formula". target ÷ context = result We just enhance the formula with percentage, as follows (target / context) x 100 = result % You get the result in percentage, ex:- (900 / 960) x 100 = 93.75% A pixel is not a pixel is not a pixel Page last changed today Yesterday John Gruber wrote about the upped pixel density in the upcoming iPhone (960x640 instead of 480x320), and why Apple did this. He also wondered what the consequences for web developers would be. Now I happen to be deeply engaged in cross-browser research of widths and heights on mobile phones, and can state with reasonable certainty that in 99% of the cases these changes will not impact web developers at all. The remaining 1% could be much more tricky, but I expect Apple to cater to this problem by inserting an intermediate layer of pixels.

12 Ways to Become a Better Designer in 2012 - Designer Blog Designer Blog Judging by the developments at 99designs, this year is going to be an important one. We’re growing and improving at an ever increasing pace and we want our designers to grow with us too. We have 12 months ahead — let’s use each month to become a better designer by learning a new skill and trying a new tip! Responsive design – harnessing the power of media queries Webmaster Level: Intermediate / Advanced We love data, and spend a lot of time monitoring the analytics on our websites. Any web developer doing the same will have noticed the increase in traffic from mobile devices of late. Over the past year we’ve seen many key sites garner a significant percentage of pageviews from smartphones and tablets. These represent large numbers of visitors, with sophisticated browsers which support the latest HTML, CSS, and JavaScript, but which also have limited screen space with widths as narrow as 320 pixels. Our commitment to accessibility means we strive to provide a good browsing experience for all our users.

Essential Sublime Text 2 Plugins and Extensions Sublime Text 2 is a relatively new code editor that I've been trying out for a while now. While it's still in public beta, it already offers a great mix of features and performance that has convinced me to switch from my trusted Komodo. While I really do love the features available out of the box, as with most things in life, there is always room for more. With Sublime Text 2 being as extensible as it is, a big ecosystem has sprouted around it, catering to most of your web development needs, be they actually useful or catering to your whimsy.