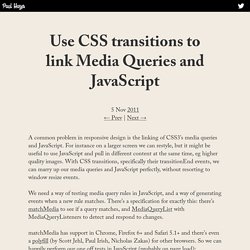 For instance on a larger screen we can restyle, but it might be useful to use JavaScript and pull in different content at the same time, eg higher quality images. With CSS transitions, specifically their transitionEnd events, we can marry up our media queries and JavaScript perfectly, without resorting to window resize events. We need a way of testing media query rules in JavaScript, and a way of generating events when a new rule matches. There’s a specification for exactly this: there’s matchMedia to see if a query matches, and MediaQueryList with MediaQueryListeners to detect and respond to changes. matchMedia has support in Chrome, Firefox 6+ and Safari 5.1+ and there’s even a polyfill (by Scott Jehl, Paul Irish, Nicholas Zakas) for other browsers. 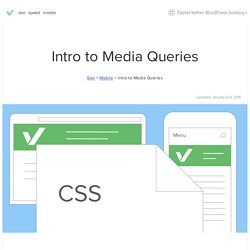 Media queries are CSS instructions essential to building modern websites and blogs They allow different css instructions to be used for different sized screens Media queries allow you to present the same content differently on different size screens. Most people think of them as a way to make the same webpage look good on a phone or a desktop computer. Media Query Snippets - list of media queries. Landscape @media (max-device-width: 1024px) and (orientation: landscape) { } Portrait @media (max-device-width: 600px) and (orientation: portrait) { } 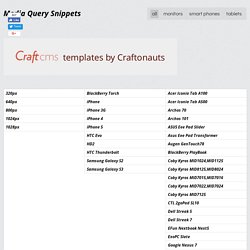 CSS3 Media Queries. Media Queries for Standard Devices. If you think responsive's simple, I feel bad for you son. 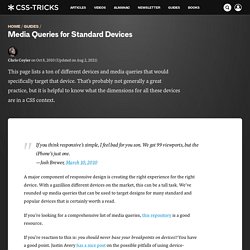 We got 99 viewports, but the iPhone's just one. —Josh Brewer, March 10, 2010 A major component of responsive design is creating the right experience for the right device. With a gazillion different devices on the market, this can be a tall task. Taille des écrans, responsive design, et point de rupture. Très régulièrement, on me pose des questions sur les tailles des écrans pour faire un design « responsive ». 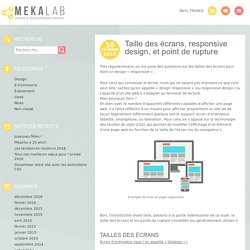 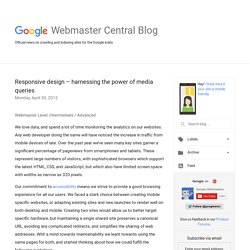 Any web developer doing the same will have noticed the increase in traffic from mobile devices of late. Over the past year we’ve seen many key sites garner a significant percentage of pageviews from smartphones and tablets. These represent large numbers of visitors, with sophisticated browsers which support the latest HTML, CSS, and JavaScript, but which also have limited screen space with widths as narrow as 320 pixels. Our commitment to accessibility means we strive to provide a good browsing experience for all our users.

We faced a stark choice between creating mobile specific websites, or adapting existing sites and new launches to render well on both desktop and mobile. Stacked content, tweaked navigation and rescaled images – Chromebooks. Media queries for common device breakpoints. The @media query is 1/3 of the recipe for responsive design. 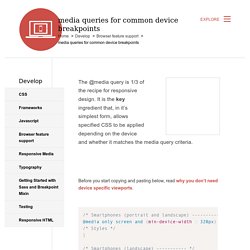 It is the key ingredient that, in it’s simplest form, allows specified CSS to be applied depending on the device and whether it matches the media query criteria. Before you start copying and pasting below, read why you don’t need device specific viewports. CSS3 Media Queries. CSS2 allows you to specify stylesheet for specific media type such as screen or print. 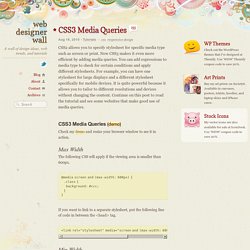 Now CSS3 makes it even more efficient by adding media queries. You can add expressions to media type to check for certain conditions and apply different stylesheets. For example, you can have one stylesheet for large displays and a different stylesheet specifically for mobile devices. It is quite powerful because it allows you to tailor to different resolutions and devices without changing the content. Awesome Media Queries in JavaScript - enquire.js.

The Lowdown What is it? 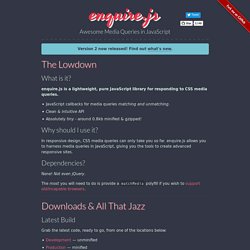 Enquire.js is a lightweight, pure JavaScript library for responding to CSS media queries. JavaScript callbacks for media queries matching and unmatching. Clean & intuitive API Absolutely tiny - around 0.8kb minified & gzipped! Defining Breakpoints. Breakpoints are the point a which your sites content will respond to provide the user with the best possible layout to consume the information. 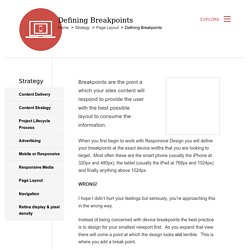 When you first begin to work with Responsive Design you will define your breakpoints at the exact device widths that you are looking to target. Most often these are the smart phone (usually the iPhone at 320px and 480px), the tablet (usually the iPad at 768px and 1024px) and finally anything above 1024px. I hope I didn’t hurt your feelings but seriously, you’re approaching this in the wrong way. Instead of being concerned with device breakpoints the best practice is to design for your smallest viewport first. As you expand that view there will come a point at which the design looks shit terrible. Mobile First. Media queries for common device breakpoints. Reponsive design : les Media Queries. Avant, créer un webdesign, c’était simplement créer l’interface pour les écrans d’ordinateurs.

Il y avait plusieurs contraintes, notamment la gestion des différents navigateurs, mais on devait aussi faire avec les différentes résolutions existantes. Scottjehl/Respond: A fast & lightweight polyfill for min/max-width CSS3 Media Queries (for IE 6-8, and more) Google Code Archive - Long-term storage for Google Code Project Hosting. How To Use CSS3 Media Queries To Create a Mobile Version of Your Website. Advertisement Many companies try to create a great experience for customers. But few are willing to make the changes required to deliver on that promise. In fact most don’t even realize just how bad their experience can be. This is why we made a new book called “User Experience Revolution,” a practical battle plan for placing the user at the heart of your company.

Get the book now! CSS3 continues to both excite and frustrate web designers and developers. Further Reading on SmashingMag: Link In this article I’ll explain how, with a few CSS rules, you can create an iPhone version of your site using CSS3, that will work now. Un Petit Conseil: N'oublie pas la Balise Viewport Meta. How To Write Mobile-first CSS. 17th Dec 2014 Building responsive websites is a must-have skill for front-end developers today.

When we speak about responsive websites, the term mobile-first pops into mind immediately. We know the importance of designing from a mobile-first perspective. Unfortunately, much less was said about coding from a mobile-first approach. Today, I’d like to share with you about the mobile-first approach to styling, why it is much better, and how to work its magic. Note: This article will be immensely helpful if you are learning to build responsive layouts with Susy. Responsive Web Design · An A List Apart Article. The English architect Christopher Wren once quipped that his chosen field “aims for Eternity,” and there’s something appealing about that formula: Unlike the web, which often feels like aiming for next week, architecture is a discipline very much defined by its permanence. Article Continues Below A building’s foundation defines its footprint, which defines its frame, which shapes the facade.

Each phase of the architectural process is more immutable, more unchanging than the last. Creative decisions quite literally shape a physical space, defining the way in which people move through its confines for decades or even centuries. Working on the web, however, is a wholly different matter. But the landscape is shifting, perhaps more quickly than we might like. In recent years, I’ve been meeting with more companies that request “an iPhone website” as part of their project. The 100% correct way to do CSS breakpoints – freeCodeCamp. For the next minute or so, I want you to forget about CSS. Forget about web development. Forget about digital user interfaces. And as you forget these things, I want you to allow your mind to wander. Responsive CSS Patterns without Media Queries. Let me start by saying that despite the title, this article is not about doing away with media queries or media query bashing in any way. Media queries are incredibly useful and I use them all the time for all sorts of things.

However, they don’t solve all our responsive design problems. It’s often desirable to effect changes to an arrangement of elements based on the dimensions of their container, rather than the viewport. To solve this problem, the concept of element queries was born. However, element queries aren’t really a thing yet, and Mat Marquis has demonstrated some problems with the concept and reformulated them as container queries. Hopefully they will be one day, but in the meantime, I’ve presented here a few tricks and techniques you can use to address some of the problems container queries will one day solve.

Firefox 3.5+, Opera 7+, Safari 3+ and Chrome already offer native support. UPDATE: Google discontinued the downloads section. Download newest version 1.0 from here: Usage: just include the script in your pages. (And you should combine and compress with other scripts and include it just before </body> for better page speed - but you already knew that).